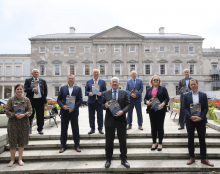 On 13 July 2021, Ireland’s Joint Committee on Foreign Affairs and Defence, after holding a series of sessions to examine demolitions and the forced displacement of people in the Occupied Palestinian Territory (OPT) published a seminal report including findings and recommendations on “Displacement and Demolitions in the occupied Palestinian territory”

Cathaoirleach of the Committee, Charlie Flanagan, TD described the purpose of the Joint Committee sessions: “The Committee is holding a series of public meetings with stakeholders following reports of the demolition of buildings in the occupied Palestinian territory, which were built with the assistance of Irish Aid, and the forced displacement of people to make way for the construction of settlements. The Committee welcomes this engagement with witnesses to discuss the issue including the humanitarian impact of forced displacement, and the Israeli policy in relation to settlements”.

On 11 May 2021, the Committee heard from several speakers who appeared virtually to give evidence, including Dr Jilan Abdalmajid, Ambassador of the Mission of the State of Palestine, Professor Noura Erakat, of Rutgers University (New Jersey, United States of America), Dr Susan Power, Head of Legal Research and Advocacy, Al-Haq, and Mr. Éamonn Meehan, former director of Trocaire and board member of the Irish-Palestinian Alliance, Sadaka. On 13 May 2021, the Committee heard from Ambassador Ophir Kariv, Embassy of Israel to Ireland, and Jackie Goodall of the Ireland Israel Alliance.

Her Excellency Dr Jilan Abdalmajid spoke of Israel’s appropriation of Palestinian property, the forcible displacement of Palestinians, de facto annexation, violence committed by the Israeli occupying forces and settlers, increased restrictions on freedom of movement during the holy month of Ramadan, other violations of Palestinians’ human rights, and the unlawfulness of such actions. She further described and gave context as to the forcible expulsion campaigns against the residents of the Sheikh Jarrah and Silwan neighborhoods of East Jerusalem. Her testimony recounted recent reports by Human Rights Watch, B’Tselem, the United Nations Office for the Coordination of Humanitarian Affairs (UNOCHA), describing a wide variety of unlawful Israeli practices, such as apartheid, forcible displacement, and settlement expansion. She recounted how in February 2021 alone, Israel, the Occupying Power had demolished or seize 153 Palestinian properties, displacing 305 people, including 172 children and affecting the livelihoods of 435 other people.

Dr Power reported the high number of Palestinian killings and injuries in East Jerusalem and the Gaza Strip caused by Israeli aggression, contextualizing it within the ongoing colonization of Palestinian land under an apartheid regime. Her address to the Committee detailed Israeli annexation of East Jerusalem and key indicators of de facto annexation of the West Bank, highlighting accelerated rates of home demolitions, settlement construction, and the exploitation of Palestinian natural resources. The Jerusalem 5800 plan, endorsed by the Israeli Minister of Jerusalem Affairs and Heritage and Minister of Tourism, proposes the absorption into the Jerusalem municipality of settlements such as Modi'in, Beit Shemesh, Gush Etzion and Ma'ale Adumim, in addition to incorporating Palestinian cities such as Bethlehem, Ramallah, Jericho and the entire Jordan Valley into a greater expanded Jerusalem metropolitan area.

Professor Erakat reminded the Committee that the expulsion of Palestinian communities is not limited to the OPT, but is also ongoing in al-Naqab Desert and in the northern Galilee region, underpinned by the principle of taking “as much Palestinian land, with as few Palestinians on the land as possible”. She went on to describe the 29 contiguous bantustans in the West Bank, explaining how “Israel's establishment is predicated on the removal of Palestinians and the assertion of uninterrupted Jewish-Zionist spatial and temporal presence throughout historic Palestine.” In doing so, Israel declared 60 percent of the Jordan Valley as a closed military zone in 1967. It built its first settlements there in the early 1970s, and consolidated its control during the Oslo accords when it declared 90 percent of the Jordan valley as Area C under full Israeli civil and military control, under the Oslo II framework. She highlighted how since 1967, Israel has reduced the Palestinian population in the Jordan Valley from 320,000 Palestinians to 60,000. It limits Palestinian access to less than 1 percent of Area C, while it has transferred in approximately 11,000 settlers across 37 settlements - practices which collectively amount to de facto annexation of the Jordan Valley.

Mr. Meehan pointed out that there is no difference in law between a de jure and a de facto annexation, both being crimes under international law. The purpose of Israeli annexation is to privilege one people over another. The focus of the international community on a de jure announcement of annexation by Israel is a political and diplomatic decision, which allows Israel to pursue its agenda while offering the perfect excuse for the international community to do nothing in defence of the Palestinian people. Mr. Meehan urged the Irish Government to immediately sponsor a motion in both Houses of the Oireachtas recognizing de facto annexation throughout the West Bank, and then take this declaration to the EU and the UN Security Council for follow-up action on Israel's breach of international law. He reminded the Committee that the events unfolding in East Jerusalem, Sheikh Jarrah and Gaza will continue unless the root cause, which is this decades-long annexation and its ever-deepening grip over Palestinian life, is brought to an end.

Dr. Power ended her address by calling on Ireland to intervene, as obligated under international law, by recognising as unlawful Israel’s de facto annexation of Palestinian land, recognising the State of Palestine, and to progress the Occupied Territories Bill. Later in the session, she urged Ireland to support updating the United Nations Human Rights Council (UNHRC) database on businesses complicit in the settlement enterprise; push for the convening of a special committee on apartheid to examine and oversee issues of apartheid on the level of the UN General Assembly; and implement countermeasures against Israel similar to those imposed by the European Union (EU) on Russia following its annexation of Crimea.

On 13 July, the Joint Committee published its Report including the following important Recommendations: