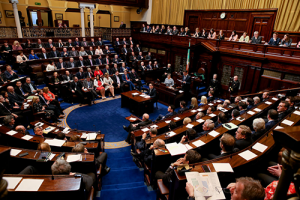 On 25 January 2019, The Control of Economic Activity (Occupied Territories) Bill 2018 passed the second stage vote in the lower house of the Irish parliament by 78 votes in favor and 45 against. As such, the objective of the Bill is “to give effect to the State’s obligations arising under the Fourth Geneva Convention relative to the Protection of Civilian Persons in Time of War” (Control Economic Activity Bill 2018).  Accordingly, the Bill proscribes a criminal penalty for the import or sale of goods or services into Ireland produced settlements which operate in violation of international law. The penalties include prison sentences of up to five years for those convicted of an offence under the legislation along with fines not exceeding 250,000 euro.

To date, the Occupied Territories Bill has passed all five stages of the Seanad (Ireland’s upper house), passing the final stage on 5 December 2018 by a vote of 29 in favour to 16 against, whereupon it passed immediately for vote on 25 January 2019 into the Second Stage of Ireland’s parliament, (Dáil Éireann).  The Occupied Territories Bill must now pass through two more stages of voting, and then a final statements stage before the Bill is signed into law. The Bill may be struck down at any of the forthcoming stages, should it be voted against.[1]

A practice has arisen in Ireland over the past year, where the Government has halted Bills proceeding before the parliament, even where these are voted overwhelmingly in favour of, by initiating a “money message” provided for under the Irish Constitution. Under Article 17.2 of the Irish Constitution, the Dáil shall not pass any law which allows for the appropriation of public monies, unless the Government has first recommended to the parliament, a message from the Government signed by the Taoiseach. The government may initiate a money message at any stage of the voting process. However given the very minor costs involved in implementing the monitoring system, the triggering of a money message in this regard would amount to a highly politicized blocking act by the government

After the final vote the Bill will be signed into law by the President of Ireland. In certain exceptional circumstances, the President upon consulting with the Council of State, may decline to sign a Bill.  For example, the President may make an Article 26 Constitutional reference, and submit the Bill for the review of the Supreme Court to test its constitutionality. Again, this is highly unlikely in the case of the Occupied Territories Bill, however there may be some grounds to examine the constitutionality of a blocking money message.

Alongside Al-Haq, the Occupied Territories Bill is supported by Adeleh Coalition, an umbrella group of sixty unions and labour organisations in the occupied Palestinian territory, representing every industry in Palestine including inter alia, for example, the Private Health Sector Workers Union, the Pharmaceutical Industry Workers Union, New Labour Union Federation, Financial Sector Workers Union, The National Society of Democracy and Law and the Union of Social Workers and the Union of Agricultural Committees.

[1] The upcoming stages include the Third Stage (also known as the Committee Stage), where amendments may be made to the Bill, which is examined section by section in the parliament and put to the vote. In the Fourth Stage (known also as the Report Stage), amendments arising out of the Committee State are considered and put to a vote in the parliament. In the Fifth and Final State, final statements on the Bill are made.