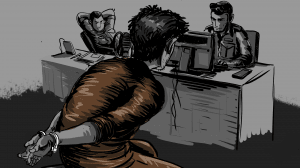 As we conclude a series of events carried out since the International Day in Support of Victims of Torture, commemorated annually on 26 June, Al-Haq draws attention to Palestinian prisoners and detainees in Israeli and Palestinian prisons and detention centres, who continue to endure torture and ill-treatment, and urgently calls for the absolute and non-derogable prohibition against all forms of torture and ill-treatment occurring during the arrests, and in prisons, detention centres, and interrogation facilities.

Since the start of its unlawful occupation, Israel has systematically resorted to, inter alia, arbitrary arrests and torture against Palestinians; creating and maintaining a climate of fear and intimidation, with the aim to supress and control Palestinians. While Israel ratified the Convention against Torture and Other Cruel, Inhuman or Degrading Treatment or Punishment (CAT) on 3 October 1991, the Occupying Power continues to enforce, develop, and implement discriminatory and unlawful legislations, policies and practices that lead to both the systematic use of torture and other forms of ill-treatment against Palestinians and to absolute impunity for the perpetrators.

At the same time, the State of Palestine has been party to CAT since it acceded to the Convention on 2 April 2014 without reservations, as it further acceded to its Optional Protocol since 29 December 2017. Despite its obligations, as per the Convention, and the prohibition of torture in the amended Palestinian Basic Law of 2003 (the Constitution), considering torture and ill-treatment as crimes not subject to a statute of limitations, the State of Palestine continues to implement weak, outdated, and unharmonized legislations, weak policies, and unjust practices; providing safe ways to practice torture with impunity for its perpetrators, and a clear gap in the path to redress for its victims.

Since the State of Palestine acceded to the Convention, Al-Haq has documented hundreds of allegations of torture and/or ill-treatment of Palestinians by Palestinian security forces in the West Bank and Gaza Strip. Of these, tens of allegations were documented since the start of 2021. These documentations highlight various forms of physical and psychological torture and ill-treatment carried out by the Palestinian security forces, including conditions of detention that degrade human dignity. Palestinians have been tortured on countless grounds, including allegations that they had committed crimes, or basis of their exercise of fundamental rights and freedoms, including rights to freedom of opinion and expression, and peaceful assembly.

As the world renews its support to victims of torture, Al-Haq continues its efforts to push to consolidate the absolute and non-derogable prohibition against all forms of torture and ill-treatment against Palestinians, either carried out by Israel, the Occupying Power, or by the Palestinian authority, and the cruciality for immediate and effective accountability measures to hold the perpetrators to account. In particular, Al-Haq, calls on: