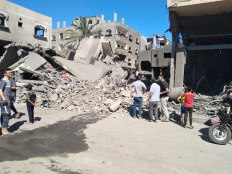 Between Monday 17 May 2021 and the afternoon of Wednesday 19 May 2021, while Palestinians from historic Palestine organized and joined a popular initiated general strike against Israeli oppression and in solidarity with Palestinians in Gaza, the Israeli Occupying Forces (IOF) intensified attacks on civilian properties, including residential buildings, commercial properties as well as sites of the Palestinian resistance. The violence and severity of the Israeli attacks have even rendered it difficult for the medical units to identify the deceased. As of 18 May, one deceased civilian could not be identified, his body having been reduced to pieces due to several burns that conceal the features of his face. Al-Rimal, in Gaza City, already devastated by a series of previous bombings that had caused severe damage to the main road leading to Al-Shifaa hospital, was the target of an increased number of military strikes, gravely impairing the operation of health centers and services in the neighbourhood. As of 19 May 2021, at 9:30 am, the Palestinian Ministry of Health in Gaza reported 219 Palestinian casualties, including 63 children, and 1,530 wounded.

At noon, on Monday 17 May 2021, medical teams and Civil Defense rescue workers retrieved the body of Shaima Alaa Sohi Al-Awf, 21, buried under the rubble of her house, following another air strike of Al-Wehda Street, Al-Rimal neighbourhood, Gaza City, on Sunday 16 May 2021.

The number of fatalities for the sole Al-Rimal neighbourhood now stands at 44, including 18 children and 13 women, as rescue teams continue to search for missing people.

At around 12:40 pm on Monday, 17 May 2021 an unmanned aerial drone, launched one missile at the home of the Al-Baz family, who were inside their home. The two-storey house is adjacent to a car workshop and is located along Salah El-Din Road near the entrance to Al-Aqsa Martyrs Hospital Street in Deir Al-Balah, in the Central Governorate. Youssef Rafiq Ismail Al-Baz, 13, was killed and his brother Ramadan, 16, was seriously injured, and transferred in critical condition to Al-Shifa Hospital in Gaza requiring intensive care. The bombing also resulted in damage to the house and nearby cars.

Later during the day, at approximately 6:45 pm, the IOF targeted, without prior warning, the last three floors of the six-storey Ghazi Shawa building, located opposite to the Rimal Martyrs Center, or Al-Rimal Clinic, and the administrative building of the Palestinian Ministry of Health, on Al-Wehda Street. The bombardment caused substantial damage to Al-Rimal Clinic and to the Ministry of Health, shattering many windows, doors, offices and medical rooms. The building contained a number of media offices, health centers and commercial companies, including the headquarters of the Islamic National Bank, the Dakhani Laboratory, the Reef Finance Corporation, the National Finance Company, and the Basma Clinic for Medicine and Dental Implants. The bombing lightly injured 10 civilians and killed two members of the Abu Dyer family:

Following the incident, the Ministry of Health, represented by Dr. Yusef Abu Al-Rish, Secretary, issued a statement to firmly condemn the targeting, endangering and wounding of health works and civilians and the deliberate targeting of health personnel and institutions. It was recorded that more than 103 members of medical teams working in the central laboratory, telemedicine, and various medical services were injured. The central laboratory and only coronavirus test center in the Gaza Strip, was forced to halt, and the provision of medical consultations related to the coronavirus pandemic was interrupted and severely impacted by the incapacitation of doctors and health workers.

In addition, Al-Haq monitored the direct targeting of:

The Israeli warplanes carried out, at approximately 10:05 pm on 18 May 2021, a series of very violent raids, bombing some 12 rockets over the course of 15 minutes, targeting agricultural lands and crossroads, specifically the road leading to the Khirbet al-Adas area, north of Rafah. The bombing resulted in the death of Sa`dia Yousef Hussein Abu Gharara, 57, from the Rafah refugee camp, as a result of a cardiac arrest.

Al-Haq also reported the death of a journalist, on 19 May 2021, at 4:30 am, the fourth and fifth floors of Muhammad Abdel Qader Muhammad Abu Hussein’s building, 63, located on Al-Galaa Street near Sheikh Radwan Junction, north of Gaza City, causing the death of Yousef Muhammad Abdel Qader Abu Hussein, 32, a journalist who works as a broadcaster for the local Voice of Al-Aqsa radio station, who is a husband and the father of three children. The bombing also completely destroyed the two targeted apartments, while a third missile fell below the house, and destroyed three civilian cars.

As the casualties escalated due to ongoing bombardments, civilians succumbed to their wounds after some days spent at the hospital. On 19 May, Al-Shifaa Hospital, Gaza City, announced the death of Firas Alaa Mohammed Al-Bahri, 20, from his injuries contracted with shrapnel on 13 May at around 1:45 pm, when an Israeli warplane targeted a group of civilians standing near Tower No. 19, Nada Towers, Ezbet Beit Hanoun, North Gaza.

Between Monday 17 May 2021 evening and Wednesday 19 May 2021, Al-Haq reported the complete destruction of four commercial and community buildings, home to a number of media outlets, administrative and educational institutions:

Notably, on 19 May 2021, at 3:00 am, Israeli warplanes targeted a residential apartment, on the fifth floor of the Zoroub building, Saraya Junction, center of Gaza City, instantly killing Omar Muhammad Amin Ibrahim Al-Mankush, 19.

On Monday, 17 May 2021, the IOF stationed behind the borders, east of Gaza City, bombed a number of factories and warehouses, located in the industrial zone east of the Shejaiya neighbourhood, east of Gaza City, causing the destruction and burning of nine factories. Among the factories that were completely destroyed: Al-Harir Factory for the manufacture of chips, Siksak factory for plastic pipes, Al-Wadi factory for food industries, Maatouq ice cream factory, Clever detergents factory, Abu Iskandar nylon factory, Company PWS Renewable Energy, stores company ‘In your hand Maintenance,’ Rafiq Textiles & Readymade Garments Company.

Furthermore, throughout the reporting period, IOF warplanes continued to bomb dozens of missiles in many areas of the Gaza Strip, targeting agricultural lands and sites of the Palestinian resistance. Several shells landed on a number of houses, forcing the residents of those areas to evacuate and seek shelter. Israeli gunboats stationed at sea also targeted the seashore. On 17 May 2021, at around 12:30 pm, an Israeli strike near the Maldives Rest House on the seashore, west of Gaza City, resulted in the killing of:

On 19 May 2021, at approximately 8:30 am, IOF warplanes targeted the home of Hamas leader Dr. Atallah Abu Al-Subah, in Al-Jeneina neighbourhood, Rafah, resulting in the complete destruction of the two-storey house, and severely and partially damaging a number of neighbouring houses.

The IOF’s indiscriminate targeting of civilians and civilian residential, industrial and commercial units throughout the reporting period indicates that Israel may be committing war crimes and crimes against humanity in the Gaza Strip. In the conduct of hostilities, Israel must comply with the principle of distinction between civilian and military objects, as per Article 48 of the First Additional Protocol to the Geneva Conventions, as well as the prohibition of indiscriminate attacks “which may be expected to cause incidental loss of civilian life, injury to civilians, damage to civilian objects, or a combination thereof, which would be excessive in relation to the concrete and direct military advantage anticipated” as per Article 51(5)(b) of the First Protocol to the Geneva Conventions, also considered as customary law.

In particular, the IOF’s unrelenting bombardment of Al-Rimal neighbourhood, and especially of medical structures and installations, has deleteriously impacted the functionality of health services, as well as on the ability of health workers to provide critical health care. In the conduct of hostilities, Israel must support in all its efforts the protection of hospitals, as well as the establishment of ‘hospitals and safety zones and localities,’ to ensure the protection of the civilian population, as per Article 14 of the Fourth Geneva Convention.

Al-Haq urges the international community to take immediate and effective measures to bring Israel in compliance with its obligations to spare and protect the Palestinian civilian population, and calls on the Prosecutor of the International Criminal Court to include Israel’s 2021 military offensive on the Gaza Strip into the scope of its investigation for war crimes and crimes against humanity.

[1] This report provides a preliminary non exhaustive report of the attacks on the Gaza Strip on Tuesday 18 May 2021.