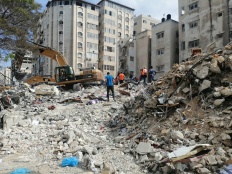 As of Monday, 17 May 2021 at 12:30 am, the Palestinian Ministry of Health in the Gaza Strip reported that 198 Palestinians have been killed, including 58 children and a further 1,300 wounded. Intensive care unit beds are now being allocated to provide for the urgent healthcare needs of air strike victims, while medical equipment and supplies are running low with the UN Population Fund (UNFPA) warning of an ‘over strained’ health system.[1] Already struggling with increasing coronavirus cases, Gaza Strip’s medical facilities are now on the verge of collapse due to the Israeli Occupying Forces (IOF) widespread, systematic, and indiscriminate attacks on civilians and civilian structure.

Since 11 May 2021, healthcare facilities have been disproportionately damaged in bombing attacks. On 11 May 2021, the IOF partially damaged two health clinics north of Gaza City, the Indonesian Hospital and Hala al-Shawa Health Center, forcing paramedics to evacuate.[2] The administrative unit of the Indonesian hospital rattled and its ceilings collapsed as a result of the explosion.[3] No injuries were reported.

On the night of 16 May 2021, the IOF targeted and completely destroyed, with at least 50 missiles and without prior warning, several residential buildings of Al-Rimal neighborhood. Gaza City.[4] The headquarters of Doctors Without Borders were also destroyed in the bombardment.[5] The bombing resulted in the killing of 30 civilians, including 11 children and 9 women.[6]Two paramedics were reported as fatally injured in the strike: Doctor Ayman Tawfiq Abu Auf, 50, serving as Director of Internal Medicine, and Doctor Moeen Ahmed Hassan al-Aloul, 67, a specialist in neurosurgery.[7] The bombardment caused severe damage to Al-Wehda street, the main road leading to Al-Shifaa hospital, the largest medical facility in Gaza. It also impaired the Churches Union junction, severely damaging the main roads leading to Al-Wehda street, blocking the road portion between Abu Talal junction and Dabit junction.[8] The missiles created a massive crater destroying the entire road. The crater has prevented ambulances from leaving or reaching the hospital, prevented patients’ movement to and from the hospital, and prevented the wounded from accessing emergency health care services.

Under Article 18 of the Fourth Geneva Convention, “civilian hospitals organized to give care to the wounded and sick…may in no circumstances be the object of attack, but shall at all times be respected and protected.”[9] The general rule is “to spare hospitals as far as is humanly possible.”[10] Where hospitals are located in close proximity to a military objective, the belligerent should “take precautions to ensure that hospitals should suffer as little as possible from the attacks and from hostilities in general.”[11] In particular, the principle of proportionality, “prohibits attacks against military objectives which are “expected to cause incidental loss of civilian life, injury to civilians, damage to civilian objects, or a combination thereof, which would be excessive in relation to the concrete and direct military advantage anticipated”. In addition, Israel, as the “Occupying Power has the duty of ensuring… medical supplies of the population” as per Article 55 of the Fourth Geneva Convention.[12]

The targeted destruction of the main artery leading to the main hospital in Gaza, Al-Shifaa hospital represents a flagrant violation of the customary law principle of precaution which requires that “constant care must be taken to spare the civilian population, civilians and civilian objects”.

Under Article 8(2)(b)(xxiv) and Article 8(2)(e)(ii) of the Rome Statute of the International Criminal Court, “the act of intentionally directing attacks against medical services in the context of an armed conflict” is considered a war crime under humanitarian law.[13]

Additional war crimes include, “intentionally launching an attack in the knowledge that such attack will cause incidental loss of life or injury to civilians or damage to civilian objects …would be clearly excessive in relation to the concrete and direct overall military advantage anticipated”.[14]

The military targeting of Al-Wehda Street, main and vital access road to Al-Shifaa hospital, breaches the principle of proportionality and the principle of precaution. It has a direct impact of the functionality of the Al-Shifaa hospital and its ability to provide critical medical services. As such, the targeting of the connecting road infrastructure to the hospital should be considered as tantamount to the targeting of the hospital itself, amounting to a war crime under the Rome Statute of the International Criminal Court.

Al-Haq reminds Israel of its obligations as the Occupying Power in the occupied Palestinian territory to comply with its obligations under international humanitarian law, in particular to establish “hospital and safety zones and localities” to ensure the protection of the civilian population including the “wounded, sick, and aged persons, children under fifteen, expectant mothers and mothers of children under seven.”[15]

Al-Haq calls on the International Committee of the Red Cross as a matter of urgency to immediately intervene and lend their good offices to ensure the functioning of Al-Shifaa hospital, and coordinate with Israel for “hospital and safety zones and localities.”

[9] Fourth Geneva Convention, Article 18. See also 1907 Hague Regulation, Article 27, “In sieges and bombardment all necessary steps must be taken to spare, as far as possible, […] hospitals, and places where the sick and wounded are collected, […].”