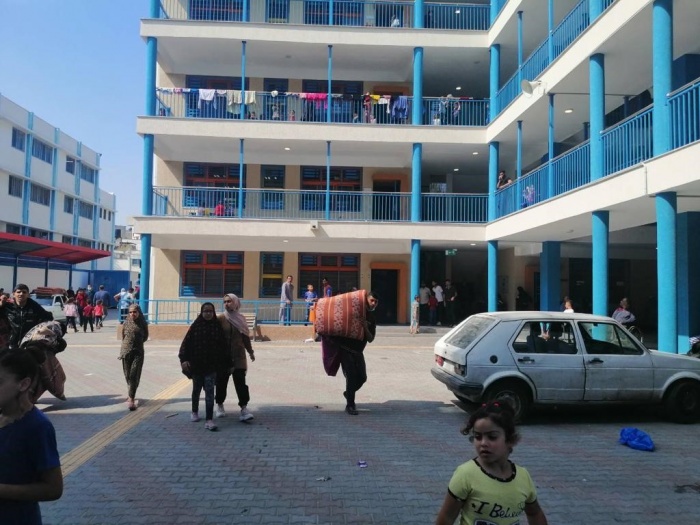 Al-Haq is deeply concerned about reports coming from the Gaza Strip that civilians fleeing bombardment and looking for shelter, at the United Nations Relief and Works Agency for Palestine Refugees in the Near East (UNRWA) were denied access to buildings as a safe haven, and also denied provision of water and other essential services in the time of emergency.

Hundreds of families were forced to leave their homes at night between 9:00- 12:00 pm on the night of 13th May to escape the violent bombing of the eastern areas of the Gaza City. Throughout the night, air strikes and artillery shells destroyed vital roads and streets in the northern central governorates of the Gaza strip, including Beit Lahya, Beit Hanon, Jabalyah, and Shuja'iyya neighbourhoods.

As of Friday, 14 May 2021 at 9:30 am, 119 Palestinians in Gaza have been killed, including 31 children and a further 830 wounded. Between Thursday 13th and Friday 14th May alone, as civilians fled the bombardments, 16 Palestinians were killed, and 250 wounded.

Given the small geographical scape of the Gaza Strip only 51 kilometres long, and the density of its two million civilian population, including one million children, the containment of the population in the territory under military closure and naval blockade and the current extensive bombing campaign, it is imperative that safe zones and neutralised zones are established in areas where conflict is taking place.

Noting that UNRWA premises, property and assets are inviolable under the 1946 Convention on the Privileges and Immunities of the United Nations and recalling UNRWA’s mandate to provide assistance and protection to Palestinian refugees, Al-Haq urges UNRWA to ensure the immediate provision of shelter as a safety zone to fleeing civilians, displaced by ariel bombardment.

It is imperative that parties to the conflict immediately ensure the conclusion of agreements for the mutual recognition of zones and localities. Al-Haq reminds Israel of its international humanitarian law obligations to establish “hospital and safety zones and localities” to ensure the protection of the civilian population including the “wounded, sick, and aged persons, children under fifteen, expectant mothers and mothers of children under seven”.[1]

Al-Haq calls on the International Committee of the Red Cross (ICRC) as a matter of urgency to immediately intervene and lend their good offices to facilitate the institution and recognition of “hospital and safety zones and localities”, including coordinating with UNRWA and other UN agency buildings, for the protection of the civilian population.

Al-Haq calls on the ICRC, UNRWA and UN agencies to urgently and immediately coordinate to ensure that areas are designated as safe zones and neutralised zones for civilian protection in the Gaza Strip.