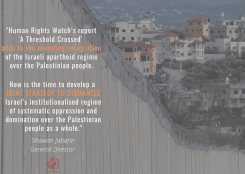 Al-Haq welcomes the publication of Human Rights Watch’s report recognising Israeli apartheid and persecution over Palestinians across Israel and the occupied territory. Human Rights Watch’s report comprehensively illustrates the Israeli authorities’ intent to maintain the domination of Jewish Israelis over Palestinians across Israel and the OPT, recognising that “a single authority, the Israeli government, ruling primarily over the area between the Jordan River and Mediterranean Sea, populated by two groups of roughly equal size, and methodologically privileging Jewish Israelis while repressing Palestinians, most severely in the occupied territory.”[1]

Al-Haq recalls the Israeli authorities’ decision in November 2018 to deport Omar Shakir, Director of Human Rights Watch, which forms part of its systematic efforts to silence any opposition towards its widespread and systematic violations against the Palestinian people.[2] Such attack on human rights defenders’ freedom of expression is one policy by which Israel’s intent to maintain its apartheid regime is exemplified.  Human Rights Watch’s report demonstrates the vigorous and ongoing efforts, by human rights defenders, to challenge Israel’s serious crimes, including its apartheid regime, despite Israel’s systematic efforts to oppress such efforts.

Al-Haq recalls the work of Palestinian civil society,[3] international organisations,[4]  UN treaty bodies and experts,[5] and academics, on Israel’s apartheid regime,[6] and underscores the importance of the mounting recognition and solidarity in overcoming institutionalised racial oppression, both in Palestine and abroad. In particular, Al-Haq recalls its joint parallel report, with seven Palestinian, regional and international human rights groups, to the UN Committee on the Elimination of Racial Discrimination (CERD) in November 2019, which comprehensively examines Israel’s creation and maintenance of an apartheid regime over the Palestinian people as a whole, including Palestinian citizens of Israel, Palestinians in the occupied Palestinian territory (oPt), and Palestinian refugees and exiles abroad.[7] The CERD submission builds on the 2017 report commissioned by the UN Economic and Social Commission for Western Asia (ESCWA), among whose key findings is Israel’s strategic fragmentation as the primary method through which it imposes apartheid and exerts its control over the Palestinian people.[8]

As Israel’s institutionalised regime of racial domination and oppression triggers responsibility of all States, it is crucial that States, the UN, and other international actors recognise this reality, and take meaningful and effective steps to bring the unlawful situation to an end. Al-Haq welcomes Human Rights Watch’s recommendations, calling on the “international community to reevaluate the nature of its engagement in Israel and Palestine and adopt an approach centered on human rights and accountability rather than solely on the stalled “peace process.” Al-Haq believes that HRW’s recommendations, to the ICC Office of the Prosecutor to investigate and prosecute those credibly implicated in the crimes against humanity of apartheid and persecution and for States to impose individual sanctions, and to implement restrictive arms sales and military and security assistance on Israel, are concrete suggestions towards ending Israel’s commission of the crimes of apartheid and persecution.[9]Al-Haq reminds that such recommendations should cover the Palestinian people as a whole, including Palestinian refugees and exiles abroad who have been denied their inalienable right to return to their homes and properties since the Nakba of 1948, as part of Israel’s strategic fragmentation of the Palestinian people constituting a tool of Israel’s establishment and maintenance of its apartheid regime.

Truth and acknowledgment are one facet of justice. By first acknowledging that the Palestinian people a whole, have been impacted by Israel’s settler-colonial and apartheid regime since 1948, we lay the foundation of a collective strategy upon which the Palestinian people and solidarity groups from across the globe can develop accountability efforts, restorative practices such as the right of return, and reparations for stolen land, as well as the deconstruction of Israel’s institutionalised discriminatory laws and policies, towards a future of justice, liberation and decolonization for the Palestinian people.

[9] HRW, ‘A Threshold Crossed: Israeli Authorities and the Crimes of Apartheid and Persecution’ (April 2021).