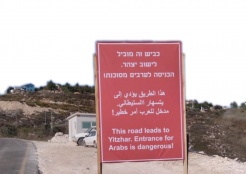 On 17 February 2021, Al-Haq submitted an urgent appeal to the United Nations (UN) Special Procedures on intensified Yitzhar settler violence against Palestinians and their properties. Addressing five UN Special Rapporteurs, including the Special Rapporteur on the situation of human rights in the Palestinian territory occupied since 1967, Professor Michael Lynk, the urgent appeal presented more than ten selected Yitzhar settler violence attacks, exemplifying Israel’s institutionalised and systematic impunity, and showcasing not only how the Israeli Occupying Forces (IOF) illegally stand by passively as Palestinians are attacked by Israeli settlers, but also how the IOF further resort to using force against the targeted Palestinians.

Settler attacks against the protected Palestinian population and their properties in the occupied West Bank are a widespread, long-term, and worsening phenomenon. Such attacks are reinforced by Israel’s systematic failure to conduct effective investigations and prosecutions of offending settler, creating a climate of impunity. Highlighting this failure, the United Nations International Fact-Finding Mission on Settlements concluded in its 2013 report that “there is institutionalised discrimination against the Palestinian people when it comes to addressing violence.”[1]

Illegally transferred in settlers from the Yitzhar settlement are notorious for their frequent violent attacks, and acts of harassments and intimidation against Palestinians, including by the targeting of livestock, agricultural lands and trees, homes, cars, and properties belonging to Palestinians residing in the surrounding villages.[4] Such attacks include beatings, throwing stones, shooting at villagers with live ammunition, torching agricultural lands, trees and cars, uprooting trees, confiscating and pillaging natural resources, including land and water, attacking and suppressing peaceful assemblies, denying access to property and to sources of livelihood, and spray-painting hate speech on cars, walls and other Palestinian properties. Most of these attacks happen under the watchful eye of the IOF, if not actively encouraged by them. The security guard of the Yitzhar settlement, Isaac Levy known as ‘Yaqoub’, is particularly infamous for his role in organising frequent attacks on the six villages and for giving orders to the IOF during the attacks.[5]

In the urgent appeal, Al-Haq requested the immediate intervention of the UN Special Procedures to protect the Palestinian protected population from systematic and ongoing settler attacks, which are conducted with institutionalised impunity, and, in particular to:

[1] UNHRC, “Report of the independent international factfinding mission to investigate the implications of the Israeli settlements on the civil, political, economic, social and cultural rights of the Palestinian people throughout the Occupied Palestinian Territory, including East Jerusalem,” 7 February 2013, UN Doc A/HRC/22/63, para 107.

[2] These eight settlements are ‘unofficial settlement outposts’ and are built by Israeli settlers around Yitzhar settlement, with the ultimate aim to expand and maintain Israel’s settler-colonial regime, appropriating more Palestinian land. Critically, even when Israeli outpost settlements are built in contravention of Israeli domestic law, they still benefit from administrative leniency and are often formally legalised post facto.

[3] Yesh Din, “Yitzhar – A Case Study: Settler violence as a vehicle for taking over Palestinian land with state and military backing,” August 2018, p. 9.

[5] Information obtained by Al-Haq field researcher on 19 September 2020, on file with Al-Haq.

[6] Al-Haq, “Al-Haq Calls on the EU to Support the Proposal for a Wide Ban of Trade with and Support for Illegal Settlements,” 28 December 2020, available at: https://www.alhaq.org/advocacy/17724.html.