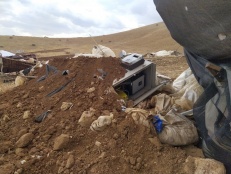 On 3 November 2020, the Israeli Occupying Forces (IOF) raided and razed to the ground Khirbet Humsa al-Fawqa, a Palestinian Bedouin community in the Jordan Valley in the Occupied Palestinian Territory (OPT). Critically, and while this attack, which was conducted during a global pandemic, has been described as “the largest forced displacement incident in over four years,” it is yet another example of Israel’s long-standing policy of forcible transfer of Palestinians. Accordingly, Al-Haq reiterates its calls to the international community to resort to all available mechanisms to achieve international justice and accountability, and in particular, to intervene immediately to economically sanction Israel, and to publicly support the International Criminal Court, for it constitutes a key tool upholding international law and a mechanism for victims to seek justice.

Israel’s colonial and apartheid regime is exemplified in its engineered and designed policies and practices in the OPT, which aim to diminish the presence of Palestinians and continue to deny their right to self-determination, including by appropriating Palestinian land, establishing and expanding its settlement enterprise, and forcibly transferring Palestinians. At the same time, Israeli civilians, illegally present in the OPT, are encouraged to exploit and profit from the rich Palestinian natural resources.

On the US election day, at approximately 11:30 am, the IOF, accompanied by six bulldozers, including CAT and JCB bulldozers as captured and recorded by the resident of raided Khirbet Humsa al-Fawqa, demolished tents, sheep pens and sheds, mobile bathrooms, water tanks, solar cells and the houses of 11 families, leaving 72 protected Palestinians, 38 of which are children, homeless.[1] On 9 February 2017, the Israeli Civil Administration gave five families residing in Humsa al-Fawqa a notice to halt the construction in the area. That being said, the Palestinian residents had not received demolition notices before the raid nor were they given enough time to evacuate their belongings during the raid, which led to their destruction as well. During their raid, the IOF further confiscated two agricultural tractors and a private car belonging to three Palestinians.[2] 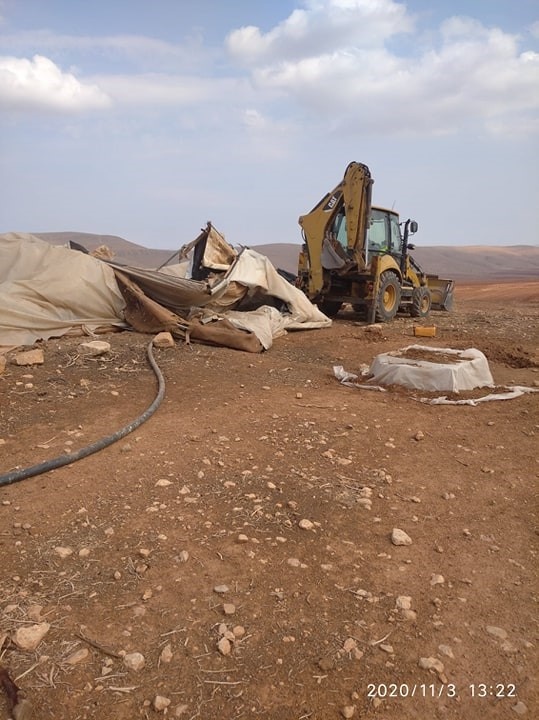 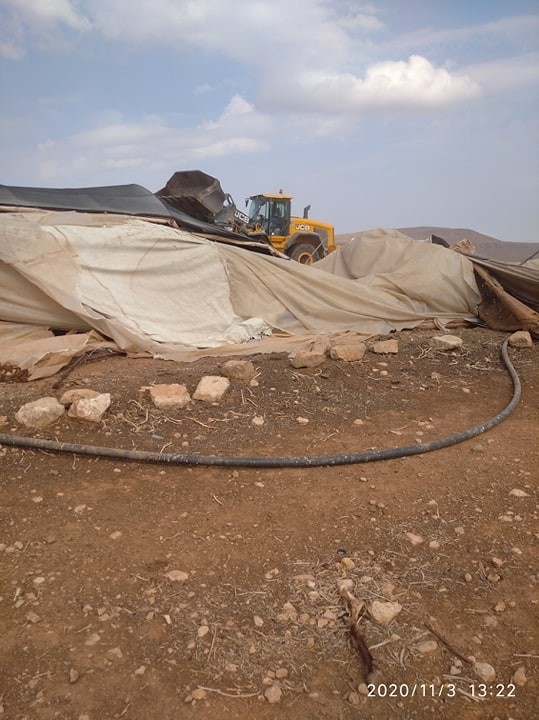 The Israeli occupying authorities seemed to utilise and take advantage of the transitional period between Trump and Biden administrations to advance, intensify and entrench its settler colonial enterprise, by creating yet another ‘fact on the ground’ and through its systematic forcible displacement of Palestinians and replacing them with Israeli settlers. The United States administrations in general and the Trump administration, in particular, have   rewarded Israel for its serious breaches of the international law. The US recognition of Jerusalem as Israel’s capital, for the purpose of recognising Israel’s purported claim to sovereignty over the city; the decision to defund the UN Relief and Works Agency for Palestine Refugees that undermines the rights of Palestinian refugees, in particular their right of return; the recognition of Israel’s sovereignty over the occupied Syrian Golan; and lastly, issuing so-called “Peace to Prosperity” plan in January 2020, in collate, entrench  Israeli apartheid regime over the Palestinian people. 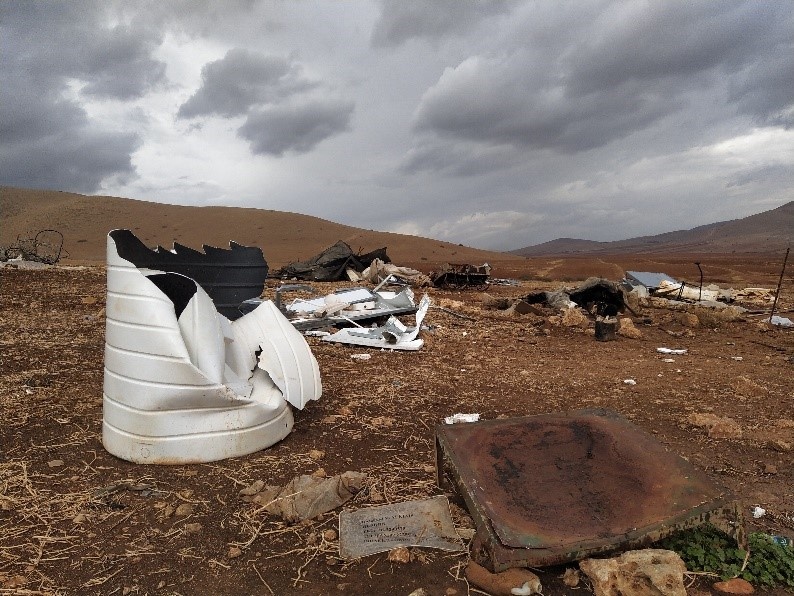 This is not the first attack on Palestinian communities in the Jordan Valley, and in Area C, neither will it be the last violation of such sort, especially if the international community continues to fail to bring Israel’s impunity to an end. Since the start of its prolonged occupation in 1967, Israel has been systematically appropriating Palestinian land and creating a coercive environment to forcibly transfer Palestinians, including by confiscating lands by declaring them as ‘state land,’ issuing Military Orders to announce Palestinian land as ‘firing zone’ areas, and imposing severe construction restrictions.

The Jordan Valley constitutes a hub of Palestinian natural resources, and contains vital land reserves for the natural expansion of Palestinian towns and cities. Khirbet Humsa al-Fawqa is located in what Israel has declared a ‘firing zone’ area. Critically, this is not its first time that residents of Khirbet Humsa al-Fawqa are targeted by the Israeli occupying authorities. The community has been the subject of frequent raids and attacks by the IOF.  Community houses and other structures were demolished may times in 2012, 2013 and 2014. In 2012, four animal sheds were destroyed, in 2013 two animal sheds and two houses were demolished, displacing nine Palestinians, including three children. In 2014, ten structures, including five houses were demolished, leaving 35 Palestinians, including 24 children, without a shelter. 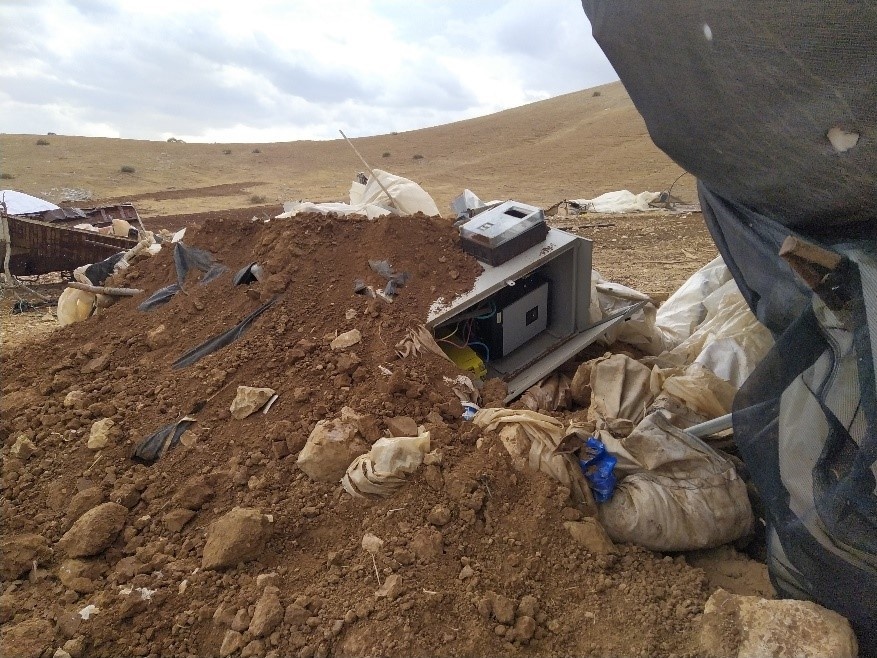 In 2020, and as of 31 October 2020, Al-Haq documented the demolition of 641 Palestinian structures across the West Bank, including East Jerusalem, in 2020. Alarmingly, Al-Haq has noted a significant increase in  the rate of property destruction that is not justified by military necessity by the Israeli occupying authorities in the second half of 2020. According to Al-Haq’s documentation demolition rate in July, August and September increased by almost 100% compared with the first six months of the year. Israel’s destruction of properties of the protected Palestinian people in Khirbet Humsa al-Fawqa constitutes a grave breach of the Fourth Geneva Convention and may amount to a war crime, as they are not justified by a military necessity. Rather, this attack exemplifies Israel’s intentions to create a coercive environment for Palestinians, amounting to direct and indirect forcible transfer, prohibited under the Fourth Geneva Convention and may constitute a war crime and a crime against humanity; entailing individual criminal responsibility for the perpetrators.

Al-Haq notes that businesses have a responsibility to respect human rights, to act with enhanced due diligence to avoid infringing on human rights, and to address human rights harms that occur, in line with the UN Guiding Principles on Business and Human Rights (UNGPs) and the OECD Guidelines for Multinational Enterprises. However, with growing concern, Al-Haq monitors and documents corporate complicity in human rights violations in the OPT and involvement of Israeli and international companies in the illegal settlement enterprise.

It is worth noting that some of the demolished structures at Khirbet Humsa al-Fawqa were funded by the European Union, the United Kingdom, Ireland, France, Belgium, Finland, Spain, Denmark, Sweden, Italy and Luxembourg; as part of their ‘humanitarian support to Palestinians at risk of forcible transfer in the West Bank.’ While humanitarian aid is needed to support individuals in such coercive environment, Al-Haq asserts that the humanitarian aid should remain a short-term, temporary support, as the international community should not deviate away from recognition of the root causes: Israel’s colonial and apartheid regime, and its associated systematic policies and practices. 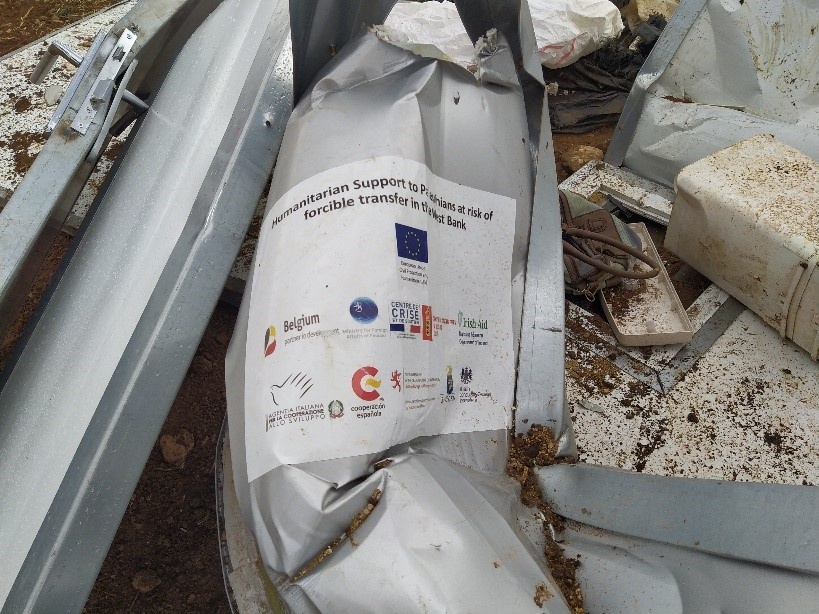 [1] Information collected and documented by Al-Haq, on 4 November in Khirbet Humsa al-Fawqa.

[2] Information collected and documented by Al-Haq, on 4 November in Khirbet Humsa al-Fawqa.