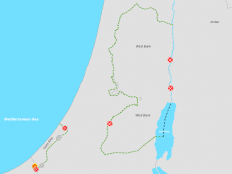 Al-Haq expresses its alarm that Israel, with the explicit support of the United States (US), is taking further steps towards the illegal annexation of the Occupied Palestinian Territory (OPT) and urges the international community to intervene immediately, taking all steps necessary at its disposal to prevent Israel’s unlawful acquisition of Palestinian territory through use of force. Since the publication of the US unilateral so-called ‘Peace to Prosperity’ plan in January 2020, there has been increasing momentum to Israel’s campaign to unlawfully annex the OPT. As such, it is imperative that the international community today acts swiftly to condemn such acts as unlawful, and to secure the rights of the Palestinian people, including the right to self-determination and permanent sovereignty over natural resources.

The US ‘Peace Plan’ represents a blueprint for the unlawful annexation of the OPT by Israel. The Plan, by reference to Israel’s exclusive need for ‘security’, seeks to sanction and legitimise the institutionalised and systemic regime of racial oppression and domination prohibited under international law as the crime of apartheid. As such, the Plan envisions the rampant escalation of Israeli annexationist policies over large portions of the OPT, and the retention of the remainder under military occupation.

In justifying such measures, the Plan provides that ‘the State of Israel and the United States do not believe the State of Israel is legally bound to provide the Palestinians with 100 percent of pre-1967 territory’ and declares that Israel is to annex Jerusalem and the entirety of the illegal Israeli settlements, that ‘The Jordan Valley, which is critical for Israel’s national security, will be under Israeli sovereignty’, and that ‘the State of Israel will retain sovereignty over territorial waters, which are vital to Israel’s security and which provides stability to the region.’

Contrary to the International Court of Justice’s 2004 Advisory Opinion, which held Israel’s construction of the Annexation Wall in the OPT to be unlawful and in breach of the jus cogens norm of self-determination, the Plan asserts that: ‘This physical barrier should remain in place and should serve as a border between the capitals of the two parties. Jerusalem will remain the sovereign capital of the State of Israel’. This follows moves of the Trump administration in 2018, ending all funding for the United Nations Relief and Works Agency (UNRWA), the closing of the Palestinian diplomatic mission in Washington DC, and the moving of the US embassy to Jerusalem for the purpose of recognising Israel’s purported claim to sovereignty over the city. In the aftermath of Israeli elections, it is being reported that the agreement reached between Prime Minister Benjamin Netanyahu and Mr Benny Gantz for the formation of a government includes plans for the annexation of the OPT.

Article 47 of the Fourth Geneva Convention stringently protects the inviolable rights of the Palestinian population from “any annexation by the [Occupying Power] of the whole or part of the occupied territory”. Accordingly, Al-Haq recalls the consistent and unbroken position of the international community that annexation of occupied territory is unlawful in all circumstances. Critically, UN Security Council Resolution 242 (1967), requires Israel’s withdrawal from the OPT, while Resolution 478 (1980), determines that ‘all legislative and administrative measures and actions taken by Israel, the Occupying Power, which have altered or purport to alter the character and status of the Holy City of Jerusalem … are null and void and must be rescinded forthwith’. UN Security Council Resolution 2334 (2016) again reaffirmed that Israel's illegal settlement enterprise constitutes a ‘flagrant violation’ of international law and has ‘no legal validity’. In accordance with their responsibilities under international law all states must refrain from actions which contravene international law, or which render aid or assistance in the maintenance of the unlawful situation, including the ongoing annexation of the West Bank, Jerusalem and the occupied Syrian Golan.

The persistent failure of third states, including at the Security Council, to adopt and enforce the necessary action to bring to an end the occupation and ensure the realisation of legal obligations is having a severely detrimental and far-reaching effect on the efficacy of the international legal framework. In December 2017 the US employed its veto power to block the adoption by the UN Security Council of a resolution that would have called upon all states to refrain from establishing diplomatic missions in Jerusalem. In March 2019 individual members of the UN Security Council ‘expressed regret’ over the decision by the United States to recognise Israel’s annexation of the Syrian Golan, but again no resolution was forthcoming. In June 2019, Al-Haq strongly condemned the statements given by the United States’ Ambassador to Israel, David Friedman, in a New York Times interview that ‘under certain circumstances … Israel has the right to retain some, but unlikely all, of the West Bank’. On 1 September 2019, Israeli Prime Minister Benjamin Netanyahu announced that ‘Israel will apply sovereignty to all West Bank settlements.’ While on 22 April 2020, US Secretary of State Pompeo, stated that annexation of parts of the West Bank is "ultimately Israel's decision to make".

Instead of recognising the prolonged occupation as unlawful and endeavouring to bring the violations of international human rights law, humanitarian law, and international criminal law to an end, third states, most notably the United States, are advocating to formalise Israel’s violations, rewarding an existing illegal situation by recognising unlawful acts of annexation.

Responding to the ongoing  marginalisation of the duty to ensure respect as an essential component of third state responsibility under international humanitarian law, Al-Haq recently noted that ‘Israel’s exploitation of the lack of willingness by third States to hold it accountable has not only allowed it to act with impunity but emboldened it to go further.’ As Israel seeks to premise its annexationist claims on its desire to perpetuate unlawful settlement, it is today incumbent upon the international community to ensure respect for two of the basic principles of international law of which annexation is a clear violation, namely the prohibition on the acquisition of territory as a result of the use of force, and the right to self-determination. To fail in this obligation is to legitimise colonialism, consolidate apartheid, and to fatally undermine efforts at securing enjoyment of human rights through the rule of law.

Al-Haq Calls on the International Community, and for states individually and collectively, to:

Failure by the international community to intervene with the necessary and comprehensive response represents a failure to respect the object and purpose of the Charter of the United Nations and imperative “to take effective collective measures for the prevention and removal of threats to the peace, and for the suppression of acts of aggression or other breaches of the peace.”