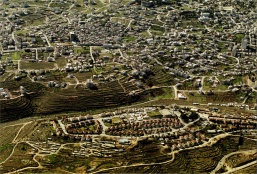 United States (US) policy and conduct with regards Palestine has intensified in its hostility, marked by developments including recognition of Israel’s supposed sovereignty over the occupied Syrian Golan, the relocation of the US embassy from Tel Aviv to occupied Jerusalem, support for Israeli annexation of vast swathes of the occupied West Bank, and attempts to bar Palestinian engagement with institutions striving for justice and accountability, including the International Criminal Court (ICC) and International Court of Justice (ICJ).[1]

This hostility, characterised by US rejection and violation of international law, is to be compounded by the reportedly imminent visit by the outgoing US Secretary of State Mike Pompeo to the illegal Israeli settlement of Psagot and its illegal settlement winery and vineyards, located on Palestinian lands in Jabal Al-Tawil, immediately outside Ramallah.

Wine manufactured and sold by the Psagot Winery was the subject of a decision of the Federal Court of Canada, issued on 29 July 2019, which held that wines produced in illegal settlements in the Occupied Palestinian Territory (OPT) cannot be labelled as “Made in Israel”. The Federal Court rejected the Canadian Government’s argument that a free trade deal between Canada and Israel, could include the illegal settlements where Israel applies Israeli customs law as “from Israel”. Rather the Court found that labelling settlement-made wine as products of Israel was “false, misleading and deceptive”, regardless of the terms of the trade deal.

All Israeli settlements in the OPT are unlawful under international law, a fact repeatedly recognised by the United Nations Security Council, including in UN Security Resolution 2334 of December 2016 which reaffirmed:

‘that the establishment by Israel of settlements in the Palestinian territory occupied since 1967, including East Jerusalem, has no legal validity and constitutes a flagrant violation under international law and a major obstacle to the achievement of the two-State solution and a just, lasting and comprehensive peace’.

As documented in the 2013 report of the Independent International Fact Finding Mission to investigate the implications of the Israeli settlements: ‘business enterprises unfold their activities in the settlements and contribute to their maintenance, development and consolidation.’[2] Due to pervasive impunity, Israel’s illegal settlement industry has been allowed to operate and expand in violation of international law. Businesses play a significant role in the consolidation and expansion of Israel’s illegal settlements, including the Psagot Winery based in the unlawful Psagot settlement.

By appropriating Palestinian lands and exploiting natural resources therein for commercial profit, Israel, Israeli Settlement Regional Councils and business enterprises, breach the international humanitarian law usufructurary provisions of Article 55 of the Hague Regulations, in addition to the requirement to maintain the capaital of the property intact. Such exploitation amounts to the war crimes of pillage and appropriation, prosecutable under the Rome Statute of the International Criminal Court. It further undermines the Palestinian right to self-determination, which includes a right to permanent sovereignty over natural resources.[3]

The United States has an international law duty of nonrecognition of the illegal activities of Israel in occupied territories, and has third State obligations stemming from the nonrecognition to not help or aid, or maintain the illegal situation -  an obligation which will be violated by the impending visit of its Secretary of State to the illegal settlement of Psagot.

[2] Report of the independent international fact-finding mission to investigate the implications of the Israeli settlements on the civil, political, economic, social and cultural rights of the Palestinian people throughout the Occupied Palestinian Territory, including East Jerusalem, A/HRC/22/63, 7 February 2013, paras 96-9.