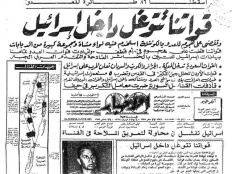 On the occasion of Naksa Day 2020, commemorating the mass displacement and military occupation that Palestinians of the West Bank and Gaza have been subject to since June 1967, Al-Haq reiterates its demand for the immediate recognition of the State of Palestine and enforcement of the Palestinian right to self-determination.

Through the prolonged occupation of the West Bank, including East Jerusalem and the Gaza Strip, characterised by the persistent and systematic violation of Palestinian human rights and international law, including the unlawful blockade of Gaza and the denial of the right of return of Palestinian refugees and exiles, Israel is today threatening to consolidate its illegal hold over Palestine by means of the continued unlawful annexation of East Jerusalem, and the impending annexation of vast swathes of the occupied West Bank.

In openly threatening and planning for further unlawful annexation, Israel is drawing on the support and sponsorship of the United States of America, whose support for full-scale annexation was set forth in the January 2020 publication of the Peace to Prosperity programme for a ‘peace agreement’.

The Peace to Prosperity programme is neither a peace plan nor a step towards a negotiated political agreement aimed at ending the occupation. It is a plan for annexation and domination, for perpetual occupation and apartheid, with a Palestinian Bantustan presented in the place of a genuine and meaningful realisation of Palestinian self-determination. There is no pretence towards equality, accountability, or an end to the pervasive impunity enjoyed by the State of Israel, merely the assertion of military might and conquest where Palestinians are to be objects of Israeli security control. In its demand that Palestine’s recourse to the protections promised by the international legal framework, including the International Criminal Court and International Court of Justice, be conditional on Israel’s permission, the programme amounts to little more than a licence for continued criminality.

It is imperative at this moment that the international community dramatically change course in its approach toward the now 53-year belligerent occupation and colonisation of Palestinian territory. In the face of further unlawful annexationist expansion, it is necessary that the international community shift from an emphasis on managing the perpetuation of the status quo toward demanding and effecting the liberation of Palestine and Palestinians in line with the fundamental norms of international law. This can start with international measures towards State recognition accompanied by economic and trade restrictions to protect against the unlawful acquisition of territory through use of force, and to prevent apartheid into perpetuity.