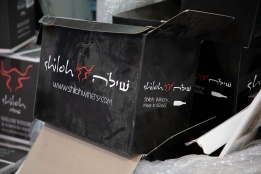 Al-Haq welcomes the decision taken by the Court of Justice of the European Union (hereafter CJEU) requiring the mandatory labelling of products originating from Israeli settlements in the Occupied Palestinian Territory (OPT) as such.[1] The CJEU judgement enforces the position of the European Commission (hereafter EC or Commission) in its 2015 interpretive notice on EU Regulation no. 1169/2011[2] on the provision of food information to consumers. The EC interpretive notice required products originating from Israeli settlements in the OPT to be labelled as such, the EC noted that indications such as ‘product of Israel’ or ‘product from the West Bank’ on products originating from settlements are misleading[3] as “the omission of the additional geographical information that the product comes from Israeli settlements would mislead the consumer as to the true origin of the product”.[4]

The case was referred to the CJEU by the French Conseil d'État after Psagot, an illegal settlement winery and the French based NGO, L'Association Organisation Juive Européenne, challenged the government’s implementation of the EU labelling regulation.[5]

The CJEU ruled that “the provision of information to consumers must enable them to make informed choices, with particular regard to health, economic, environmental, social and ethical considerations”.[6] Further, the CJEU noted that Israeli settlements, “may be the subject of ethical assessments capable of influencing consumers’ purchasing decisions”.[7] Consequently, “the omission of the indication that a foodstuff comes from an ‘Israeli settlement’… is likely to mislead consumers, by suggesting that that food has a place of provenance other than its true place of provenance.”[8]

The CJEU reiterated that the European Union (hereafter EU) does not recognise the sovereignty of Israel over the West Bank (including East Jerusalem), the Golan Heights, and Gaza. The Court stated “that the settlements established in some of the territories occupied by the State of Israel are characterised by the fact that they give concrete expression to a policy of population transfer conducted by that State outside its territory, in violation of the rules of general international humanitarian law”.[9]

The decision taken by the CJEU comes at a crucial time of escalating construction of Israeli settlements and threats of annexation of parts of the West Bank.[10] Israel and the United States criticized the judgement. On 18 November 2019, less than a week after the judgement, U.S. Secretary of State, Mike Pompeo declared that the U.S. no longer considers Israeli settlements in the West Bank to be a violation of International law.[11] On 19 November 2019, the Dutch Parliament passed a motion objecting to the ruling of the CJEU. The Dutch government wrote a response to the Parliament reaffirming its position on the illegality of settlements and the consistent unified implementation of EU regulations.[12]

The CJEU judgement represents a step towards the EU living up to it responsibilities under international law concerning the occupation of Palestine and the war crimes being committed in the process. Israel has occupied the OPT since 1967 and since then has systematically implemented policies and practices that provide for the colonization of Palestine and the construction of illegal Israeli settlements inside the OPT. These settlements are manifestly illegal under international law, as they involve the acquisition of territory by force, in violation of Article 2(4) of the Charter of the United Nations, a jus cogens principle of international law from which no derogation is permitted, as well as being prohibited under Article 49 of the Fourth Geneva Convention. The settlements involve the transfer of civilians of the Occupying Power into occupied territories, prohibited under Article 49(6) of the Fourth Geneva Convention, and require the confiscation, appropriation and exploitation of Palestinian land and resources for the benefit of the Occupying Power, in violation of Article 52-55 of the Hague Regulations of 1907.

The settlements and businesses operating within them, such as Psagot winery, use Palestinian land and natural resources to support and sustain themselves. Such exploitation is unlawful and further undermines the Palestinian right to self-determination, which includes a right to permanent sovereignty over natural resources.[13]

Furthermore, the decision of the CJEU echoes similar positions and developments on national and international levels. Internationally, The UN Working Group on the Issue of Human Rights and Transnational Corporations advised that companies consider terminating their business operations in areas with settlements, where there is a heightened risk of negative human rights impacts.[14] In 2016, the United Nations Security Council adopted Resolution 2334, calling on states to “distinguish in their relevant dealings, between the territory of the State of Israel and the territories occupied since 1967 because of the illegal nature of settlement.”[15] More recently in October 2019, the Special Rapporteur for the Occupied Palestinian Territory, Michael Lynk, called for the adoption of “measures and the determination to enforce accountability,” starting with an international agreement on “a complete ban on the export of all products made in the illegal Israeli settlements in the world market.”[16]

On a national level, the Federal Court of Canada issued a judgement in July 2019 finding that labelling settlement-made wine as products of Israel “interferes with the ability of Canadian consumers to make “well informed decisions and well informed and rational choices.”[17] The Federal Court clarified that consumers have the right to “express their political views through their purchasing decisions”, which requires accurate information with regards to the source of the product.[18] In Ireland, a Bill that aims to completely ban the import of settlement products and services to the Irish market is expected to be voted on soon.[19]

Though the judgement of the CJEU is a step in the right direction, it is insufficient for the EU to put the responsibility for doing ethical business on consumers. For the EU to fully live up to its responsibilities under international law, Al-Haq advises the EU to heed the call by UN Special Rapporteur Michael Lynk:[20]

Al-Haq adds that the EU must suspend the association agreement with Israel in accordance with Article 2 of the agreement,[22] until such time that the occupation is ended, and the systematic human rights violations are put to an end.

The full text of the judgement by the CJEU can be found here.

[3] European Commission, Interpretive notice on indication of origin of goods from the territories occupied by Israel since June 1967, 2015, para. 16.

[4] European Commission, Interpretive notice on indication of origin of goods from the territories occupied by Israel since June 1967, 2015, para. 10.

resources", amongst other sources of this norm.

[19] Al-Ha q, Al0Haq Welcomes the Passing of the Occupied Territories Bill through Detailed Scrutiny and thanks Nial Collins, TD and Senator Frances Black for their Continued Commitment to the Bill, 17 December 2019, available at http://www.alhaq.org/advocacy/16308.html.

[21] Al-Haq, More than 100 Organizations Call for the Release of the UN Database of Businesses Engaged in Activities with Israeli Settlements, 29 August 2019, available at http://www.alhaq.org/advocacy/14950.html.