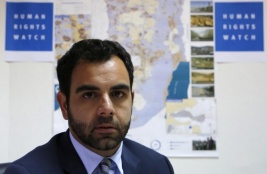 On 5 November 2019, Israel’s Supreme Court upheld the decision to deport Omar Shakir, Director of Human Rights Watch, based on the 2017 Amendment No. 28. The decision is based on Israel’s anti-boycott law which prohibits the grant of a permit for entry to, and residence in Israel, to any person who has knowingly published a public call to engage in a boycott against Israel or has made a commitment to participate in such a boycott.[1] The Supreme Court’s ruling gave Mr. Shakir 20 days to leave Israel.[2]The decision to deport Mr. Shakir illustrates Israel’s continued escalating institutionalized targeting of human rights defenders and organizations aimed to suppress and delegitimize work that monitors, documents and criticizes its policies and systemic violations against Palestinians.

In response to Israel’s decision to deport Mr. Shakir, the Palestinian Human Rights Organisations Council (PHROC) reminds that this decision reaffirms that the Occupying Power does not tolerate criticism or allows for freedom of expression. The decision further proves that Israel’s judiciary merely provides a rubber stamp for the Israeli authorities’ arbitrary policies and measures, including against human rights organizations, defenders and activists working to uphold the rule of law and promote human rights standards for the Palestinian people.

PHROC stands in solidarity with Omar Shakir and Human Rights Watch and strongly condemns the decision of Israel’s Supreme Court. PHROC calls on the international community, including relevant UN bodies and third States to take immediate action to ensure the protection of civil society and human rights organisations working for Palestinian rights, and to ensure their continued work and presence without limitations. PHROC reaffirms the importance of human rights defenders and organizations in promoting and protecting human rights and the rule of law in Palestine, who will not be hampered by Israel’s smear campaigns, acts of intimidation and arbitrary measures, including deportation and movement restrictions.