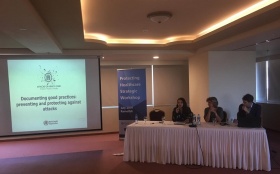 On Thursday, 11 July 2019, Al-Haq participated in a full-day strategic workshop on protecting healthcare in the Occupied Palestinian Territory (OPT), organised by the World Health Organization (WHO) in cooperation with the Palestinian Ministry of Health and the Office of the United Nations (UN) High Commissioner for Human Rights, at the Carmel Hotel in Ramallah. The strategic workshop brought together a wide range of participants, including health workers, Palestinian and international civil society organisations working in the medical and human rights fields, and representatives of UN agencies in Palestine and Geneva. The WHO Strategic Workshop on Protecting Healthcare was convened to review the extent, nature, and impact of attacks on healthcare in Palestine, to understand gaps in existing approaches for the protection of healthcare, and to identify key strategic interventions and good practices to strengthen the protection of healthcare in Palestine.

During the workshop, important interventions were made by affected Palestinian health workers, who described the challenging environment in which they are forced to operate when providing healthcare to Palestinians in the OPT, including severe movement restrictions imposed by the Israeli occupying authorities, resulting in delays, and at times denials of access, which could have life-threatening consequences. The affected health workers described inhumane “back to back” procedures requiring the transfer of patients, including neonates, from one ambulance to another at Israeli checkpoints, in addition to mandatory checks imposed by the Israeli authorities on Palestinian ambulances reaching Israeli hospitals in East Jerusalem, even in life-threatening situations. In addition, one of health worker recounted his experience of Israel’s excessive use of force against paramedics in Dheisheh Refugee Camp on 27 March 2019, when 17-year-old volunteer first responder Sajed Mizher was shot and killed by the Israeli occupying forces (IOF), while he was attempting to tend to an injured Palestinian.

Speaking on the second panel, Al-Haq’s legal researcher, Rania Muhareb, addressed the IOF’s widespread and systematic attacks on healthcare in the OPT. In particular, she highlighted serious escalations in attacks against health workers by Israel, the Occupying Power, reflected in the killing of five Palestinian health workers by the IOF since 30 March 2018. Of these, four paramedics were killed during the ongoing Great Return March demonstrations in the occupied Gaza Strip, which may indicate a systematic policy and plan to target healthcare providers, amounting to a grave breach of the Fourth Geneva Convention and a war crime under the Rome Statute of the International Criminal Court (ICC). In particular, Ms. Muhareb’s presentation highlighted Al-Haq’s efforts in refuting Israeli army and media claims on the killing of volunteer first responder with the Palestine Medical Relief Society (PMRS), Sajed Mizher, in Dheisheh Refugee Camp on 27 March 2019, stressing that Israel’s campaign against Sajed sought not only to justify his extrajudicial killing, while he was on duty and clearly marked as a health worker, but also served to undermine the Palestinian health sector as a whole.

Accordingly, Ms. Muhareb stressed that there is an urgent need for accountability for attacks on healthcare in the OPT, including through the opening of an ICC investigation and the implementation of the recommendations of the UN Commission of Inquiry on the Great Return March, which included a number of key recommendations on protecting healthcare and upholding the right to health in Palestine, in addition to its call on Israel, the Occupying Power, to lift its unlawful closure of the Gaza Strip, which has made Gaza uninhabitable and amounts to collective punishment, in violation of international humanitarian law. Ultimately, Ms. Muhareb argued that, in the absence of serious and genuine efforts to seek accountability, attacks against Palestinian civilians, including health workers, would continue and Israeli impunity would prevail.

During the second part of the workshop on “strengthening health protection”, the WHO organised three breakout groups to examine monitoring and documentation, advocacy and prevention, and coordination and interventions for mitigation of attacks on healthcare in Palestine. Along with the WHO, Al-Haq facilitated the advocacy breakout session, which explored advocacy tools for the prevention of violations of the right to health, including the development of targeted campaigns, the need for scientific research and data collection, and the importance of accountability for attacks on healthcare in Palestine. The advocacy breakout group examined successes of previous efforts to advocate for the right to health in Palestine, including as a result of civil society efforts at the UN Human Rights Council in Geneva and at the European Union Member State level, while it also identified the violations and challenges facing the Palestinian health sector. At the close of the breakout session, participants in the advocacy working group agreed to establish an emergency response group to better coordinate efforts in countering attacks against healthcare and further violations of the right to health in Palestine.

To read Al-Haq’s recent work on attacks on healthcare, see, for example:

For any inquiries or requests for information or follow-up, please contact Al-Haq’s advocacy team, at [email protected].