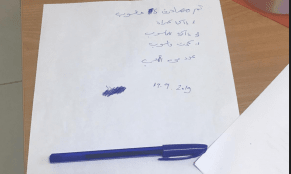 On 19 September 2019, at approximately 2:00 am, Israeli Occupying Forces (IOF) raided the offices of Addameer, the leading Palestinian human rights organization on prisoner’s rights. Addameer(Arabic for conscience) Prisoner Support and Human Rights Association, was established in 1992, “to support Palestinian political prisoners held in Israeli and Palestinian prisons” and provides “free legal aid to political prisoners, advocates their rights at the national and international level, and works to end torture and other violations of prisoners' rights through monitoring, legal procedures and solidarity campaigns”.During the early morning raid, the IOF broke into Addameer’s offices and pillaged “five laptops, memory cards, three laptop memories, one laptop card and several books”. In addition, the IOF left a crude note, listing the expropriated items along with the date.

Al-Haq warns that the private property of human rights organizations in occupied territory is especially protected under Article 46 of the Hague Regulations (1907). Critically, the requisition of private property is only permitted in the most limited of circumstances, subject to military need under Article 52 of the Hague Regulations (1907). Interestingly, the army left a crude inventory of the pillaged items, which appears to be an attempt to satisfy the Article 52 requirement that “a receipt shall be given and the payment of the amount due shall be made as soon as possible”, indicating that this was indeed an attempted requisition.

However, the raid and expropriation fail to meet the rigid and limited threshold of “military need” under Article 52. Specifically, military need, refers to the “needs of the army of occupation” and pertains to immediate needs such as the supply of food, shelter etc. For example, the UK Military Manual, outlines that the Occupying Power may only requisition commodities and services “for its maintenance”.[1]According to the Expert Opinion of Professor Michael Bothe, “the sense of this provision is to allow an army of occupation to provide for its sustenance out of the resources of the occupied territory”.[2]Certainly, the computers of a human rights organization are not an immediate requirement for the maintenance and sustenance of the IOF, the army of the eighthmost powerful country in the world. Rather, the expropriation amounts to an unlawful requisition and pillage, a war crime, prosecutable at the International Criminal Court.

Further, the raid is a deliberate attempt to frustrate the pursuit of justice for Palestinian prisoners, subject to cruel and inhuman conditions under Israeli detention. Currently, there are over 5,150Palestinian prisoners incarcerated by Israel, many of which UN Special Rapporteur, Michael Lynk has warned“are incarcerated in prisons within Israel, and not in the Occupied Palestinian Territory, in contravention of International Humanitarian Law”.  Many of the prisoners are held in cruel and inhuman conditions, denied access to lawyers and held in solitary confinement. The latest attack on Addameer represents a further assault on Palestinian rights to due process and legal representation in violation of Article 9 and Article 14 of the ICCPR, and amounts to a dangerous, direct and, unwarranted attack on the independence of Addameer’s lawyers who provide free legal aid to political prisoners.

Al-Haq condemns in the strongest terms the attack on Addameer, as an attack on the independence of Palestinian human rights NGOs. It should be further noted that this is the third such incident where the Israeli soldiers have raided the offices of Addameer, the first was in 2002 and the second incident was in 2012.Al-Haq considers that the raid and pillage of property, is a further attempt to silence Palestinian human rights defenders in violation of Article 19 of the International Covenant on Civil and Political Rights (ICCPR) on the right to freedom of expression and the efforts by Addameer to draw global attention to the systematic policies and practices of Israel’s mass incarceration of the Palestinian population as a measure of social control, to silence resistance to the occupation, colonization and annexation of the territory.

[2]Michael Bothe, “Expert Opinion: “Limits of the right of expropriation (requisition) and of movement restrictions in occupied territory”  (2012), available at: https://www.diakonia.se/globalassets/blocks-ihl-site/ihl-file-list/ihl--expert-opionions/limits-of-the-right-of-expropriation-requisition-and-of-movement-restrictions-in-occupied-territory.-dr.-iur.-prof-michael-bothe.pdf