The undersigned Palestinian human rights organisations view with deep concern the current status of, and patterns of interference with, the Palestinian judiciary and justice sector. The human rights organisations are further greatly concerned as to the violation of firmly established constitutional principles as enshrined under the Amended Basic Law. On 15 July 2019, the Palestinian President promulgated Law by Decree No. 16 of 2019 Amending the Law on the Judicial Authority and Law by Decree No. 17 of 2019 on the Formation of a Transitional High Judicial Council. Published in the Official Gazette, both recently adopted laws by decree reflect a dangerous shift undermining constitutional legitimacy, particularly the principles of the rule of law, the separation of powers, the foundations of judicial independence, and pillars of good governance. As a result, such a shift may strip fundamental rights and freedoms of their judicial protection, which require an independent judiciary, whose formation and functions are solely governed by law and the principle of legality.

Modern constitutional jurisprudence and legislation tends to view the independence of the judiciary as a key prerequisite for democratic constitutions. Providing a protective shield for public rights and freedoms and the principle of the rule of law, the judiciary is accorded the same status as the executive and legislative branches of Government. Accordingly, constitutions and laws must incorporate norms guaranteeing the requirements of judicial independence by laying the foundations for specific constitutional and legal regulations ensuring the protection of the independence of the judiciary both procedurally, in terms of its formation, and objectively in terms of its functioning. These matters are addressed under Articles 97, 98, 99, and 100 of the Palestinian Basic Law, which serves as the provisional Constitution.

Under the principle of the supremacy of the constitution, ordinary legislation must comply with, and may not violate, the object and purpose of constitutional laws. As such, the ordinary legislature, meaning the legislative power, must maintain the highest degree of vigilance in the law-making process. This principle is all the more relevant in the case of extraordinary legislation, namely laws by decree, which are promulgated while the Palestinian Legislative Council, the Parliament, is not in session and in cases of necessity, which cannot be delayed. Notably, laws by decree have the same power of law as ordinary legislation but are not considered laws as such. Rather, they constitute executive decrees that have the force of law. When it comes to the judiciary, there is a need for even greater vigilance, the Palestinian Basic Law regarding the judicial power as a constitutional matter, for which it has devoted a special and markedly different regulation compared with other matters.

The amendment to the Law on the Judicial Authority comes in light of the current crisis and the unprecedented conflict and polarisation within the Palestinian political system, with their serious implications on the enjoyment of human rights and fundamental freedoms in Palestine. The amendment also comes within the context of the continued deterioration in the human rights situation and the failure by the State of Palestine to abide by its international obligations following its accession to core human rights treaties, and in particular, the 1966 International Covenant on Civil and Political Rights (ICCPR), which obliges States Parties to ensure the independence and impartiality of the judiciary. In addition, the recently adopted laws by decree on the judiciary are contrary to the 1985 United Nations (UN) Basic Principles on the Independence of the Judiciary, which reaffirm that judicial independence shall be guaranteed by the State, while they further violate the object of national constitutional principles guaranteeing judicial independence.

Having followed closely the amendment by the executive authority of the Law on the Judicial Authority, its dissolution of the High Judicial Council as well as all panels of the High Court and of the courts of appeals, and the formation of a Transitional High Judicial Council with broad and open-ended powers without legal safeguards or standards, the Palestinian human rights organisations here undersigned stress the following:

Signatories to the position paper: 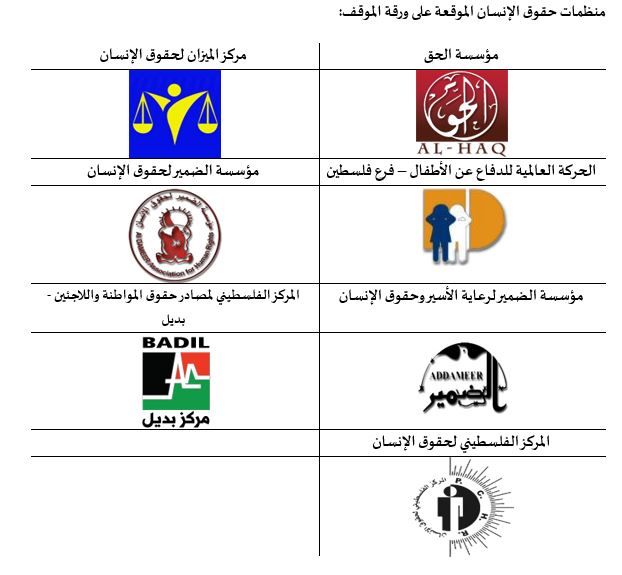