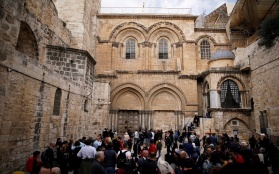 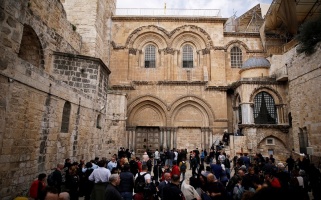 On 25 February 2018, the Patriarchs and Heads of Local Churches in Jerusalem announced the closure of the Church of the Holy Sepulchre in Jerusalem as a measure of protest against Israel’s deliberate violation of the status quo and its systematic campaign of targeting Churches and the Christian presence therein. Israel’s Jerusalem Municipality, has demanded that Churches in Jerusalem must pay municipal taxes for their properties and assets, supposedly excluding houses of worship.[1] In protest, the Church was closed for three days. Over the years, Israel’s occupation has explicitly and deliberately developed and implemented policies and measures to ensure the Judaisation of Jerusalem. Israel, the Occupying Power, has unlawfully altered the legal status of Jerusalem, amending its 1980 Basic Law to annex Jerusalem as its ‘united and eternal Capital’, in contravention of international law.[2]

Alongside Israel’s annexation, Israel has implemented policies and laws to forcibly transfer  Palestinians from Jerusalem[3] and to Judaise the City. Such  measures include revoking and denying residency status for Palestinians in the City, preventing child registrations of births, house demolitions, discriminatory planning and zoning, and deliberately restricting the economic life to de-develop East Jerusalem. The Occupying Power has erected physical and administrative barriers, including the illegal Annexation Wall and its associated regime, to separate Jerusalem from the rest of the Occupied Palestinian Territory (OPT), isolating it and its Palestinian residents from the rest of the occupied population.

Over the past few years, the occupying authorities have subjected the Old City of Jerusalem to arbitrary measures of collective punishment, closures and restrictions.[4]Palestinian social and cultural centres,[5] as well as religious sites in Jerusalem have been subject to restrictions and attacks. Israel’s targeted measures against Jerusalem’s holy sites include the closure of the Al-Aqsa Compound by the occupying authorities most recently in July 2017, denying Palestinians entry to the Compound while allowing settlers to enter the compound under the protection of Israeli forces. Meanwhile in February 2018, Israeli authorities attempted to impose staggering taxations on Churches and their property in Jerusalem and have further threatened them with the confiscation and seizure of their property through a Bill initiated before the Israeli Parliament, which was subsequently shelved on 25 February 2018.[6] On 27 February, the Israeli Prime Minister said that the collection actions of taxes is suspended.[7]

It should be noted, that churches have offered hundreds of Palestinian families from the Christian community in Jerusalem subsidised housing. This has alleviated a considerable amount of the burden inflicted by Israel’s severe restrictions on housing and planning for Palestinian neighbourhoods and communities in the city. Moreover, Church-run institutions have long provided services to Palestinians in Jerusalem, and beyond, irrespective of their religious affiliation, both free of charge or for a minimal price. Such services include: health care and medical assistance through hospitals and clinics; education through the numerous schools benefiting more than 12,000 students in Jerusalem alone; orphanages; legal services; among many others. If the Jerusalem municipality continues to demand tax payment from churches, this will have a crippling affect on the occupied Palestinian population, who benefit from the charity of the Church. Specifically, the law of occupation dictates that any change of law by the Occupying Power should be administered in the best interest of the occupied population.[8]  Furthermore, given Israel’s Jerusalem Municipality’s discriminatory policies and projects – in favour of the Israeli population – it is highly unlikely that any of the collected tax would be used for the benefit of the occupied Palestinian population in Jerusalem.

In accordance with the decrees formulated during the reign of the Ottoman Empire, the principle of ‘status quo’ is an arrangement that governs the Church of the Holy Sepulchre, and  other churches and holy sites. This principle was intended to end disputes regarding ownership between the Christian communities and governing authorities, and remains in use to this day.[9] The commitment to these unwritten decrees has been traditionally accepted as in the best interest of safeguarding churches and Christian heritage in Jerusalem. Israel’s interference with Church property in this regard, is contrary to international law, which specifies that the Occupying Power is not a sovereign in the territory it occupies and must respect the laws in force in the territory.[10] In addition, the law of occupation stipulates that the Occupying Power does not acquire ownership of private property, including property used for religious purposes, charity and education, as well as historical monuments and cultural property – all of which cannot be confiscated.[11] Notably, Church property is especially protected as private property under the Hague Regulations.[12]

Israel’s provocations targeting religious sites in Jerusalem should be perceived within the larger context of Israel’s plan to seize control of and Judaise the City, including by administering its religious institutions, as part of its ongoing colonisation process. Cultural rights are guaranteed under international law, namely the Universal Declaration of Human Rights[13] and the International Covenant on Economic, Social and Cultural Rights.[14] According to the UN Special Rapporteur on cultural rights, “cultural heritage is a fundamental resource for other human rights, including the right to freedom of expression, freedom of thought, conscience and religion, as well as the economic rights of the many people who earn a living through tourism related to such heritage.”[15]

In 1982, the United Nations Educational, Scientific and Cultural Organization (UNESCO) added the Old City of Jerusalem and its Walls to the World Heritage Sites in Danger, a status updated in 2017.[16] Furthermore, Article 11 of the Convention on the Means of Prohibiting and Preventing the Illicit Import, Export and Transfer of Ownership of Cultural Property of 1970 prohibits and renders illicit the direct and indirect transfer of ownership of cultural property, including religious sites, by a foreign occupying power. Seeking the protection and preservation for Jerusalem as a whole, its occupied population, as well as its religious and historical sites, the international community must take effective and immediate measures to end Israel’s unlawful and unilateral measures affecting the status of Jerusalem. States must “bring to an end through lawful means any serious breach” of international law,[17] such as that in the occupied city of Jerusalem.

Hurryyat - Center for Defense of Liberties and Civil Rights

[5] On 24 February 2018, Al-Haq monitored the Israeli Occupying Forces shut down Philadelphia Restaurant in the eastern part of Jerusalem, prohibiting a dinner organized for journalists, claiming that it is funded by a ‘terrorist’ organisation. In addition, in August 2017, Israeli forces forcibly shut down the Yabous Cultural Centre in Jerusalem to ban a lecture on Al-Aqsa Mosque from taking place. See: Stop the Wall, Yabous Cultural Centre, Jerusalem, Shut Down by Israeli Police, 29 August 2017, available at: https://www.stopthewall.org/2017/08/29/yabous-cultural-center-jerusalem-shut-down-israeli-police

[8] Regulations concerning the Laws and Customs of War on Land (the Hague Regulations 1907), Article 43.