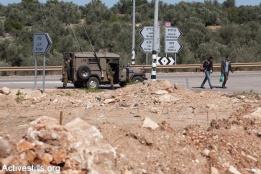 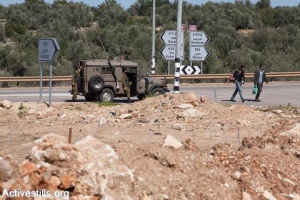 Over the past few months, there has been an alarming increase in the arbitrary arrest and detention of Palestinians across the Occupied Palestinian Territory (OPT). Since the beginning of 2012, Al Haq has documented at least 27 raids in towns and villages in the OPT, including East Jerusalem, during which around 60 people were arrested, including 12 children.

‘Azzoun, a town in the northern West Bank, located approximately nine kilometers east of Qalqilya, is a frequent target of arrest raids by the Israeli forces. During 2011, Israeli forces arrested and detained 147 people from the village. Only a quarter of those detained have been released while the rest remain in prison. This month alone, Israeli soldiers have invaded the village three times, raiding houses and arresting 19 people, of whom six were children.

On 16 January, at around 1:30 am, approximately 20 Israeli military jeeps entered ‘Azzoun. Soldiers raided some 20 homes. During the raid, the Israeli forces physically and verbally attacked two Palestinians, Mahmoud Rashid Radwan and Yousef Ahmad Saleem; and arrested ten people, among them a 16 year-old boy.

At around 1:30 am, Mahmoud (28 years old) was woken by knocking on the front door of his house. When his father opened the door, Israeli soldiers ordered the entire family, 12 members, to leave the house. Mahmoud saw approximately 30 Israeli soldiers wearing black masks. The soldiers checked their IDs and separated Mahmoud and his brothers, Mohammad (23 years old), ‘Issam (22 years old) and Wissam (20 years old), from the other family members. The men were then handcuffed, blindfolded and taken to a location west of their house.

After half an hour, while they were still handcuffed, blindfolded and sitting on the ground, a number of soldiers beat Mahmoud and his brothers with the butts of their riffles. A short time later, an Israeli soldier removed Mahmoud’s blindfold and introduced himself as ‘Ameen’ from Israeli intelligence. ‘Ameen’ told Mahmoud, who had recently been released as part of the prisoner swap deal between Israel and Hamas, that they would be keeping an eye on him. At that moment, another soldier struck Mahmoud with so much force that his right arm was broken.

Mahmoud was released at around 5.00 am and returned to his house to find that it had been searched with dogs and the furniture had been damaged. He also found out that his two brothers Wissam and Mohammad had been arrested. Mahmoud had to be taken to hospital to treat his injured arm. (Al-Haq Affidavit No. 7026/2012)

At 2:30 am, Yousef (29 years old) and his 16-year-old brother, Ghaleb, heard noises outside their house. When they looked out of their window, they saw around 20 masked Israeli soldiers climbing a wall into their front yard. Yousef saw a soldier trying to break open the door so he shouted at him to stop and said that he would open the door. However, the soldier threw a sound bomb towards Yousef that woke the rest of the family.

The soldiers broke the door, entered the house and dragged Yousef’s other brothers, Thabet (28 years old) and Qassem (24 years old) out to the front yard. The soldiers then beat the two brothers and bound their hands with plastic ties. Yousef, who has recently had surgery to his right leg, was slow to reach the ground floor where the soldiers were. The soldiers dragged him out of the house and beat him until he passed out. A short time later, Yousef regained consciousness and saw the soldiers tying Ghaleb’s hands, then bashing his head against the wall. The soldiers left at around 4:00 am, arresting Ghaleb and leaving Yousef, Thabet and Qassem still handcuffed. (Al-Haq Affidavit No. 7027/2012)