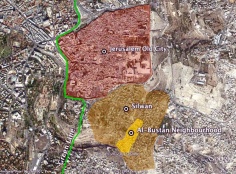 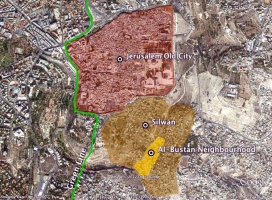 Palestinian residents of East Jerusalem continue to face an increased threat of home-demolition and forced eviction. The neighbourhood of Silwan, located to the south of the old city of Jerusalem, and with a population of over 50,000 Palestinians, is at particular risk. The city municipality, whose unilaterally drawn borders were established by Israel in 1967 when East Jerusalem was illegally annexed, plans to demolish 88 Palestinian homes in al-Bustan area in the centre of Silwan (see map below) to make way for the development of a so-called archeological park, known as King David’s Garden. If the plan goes forward, more than 1,500 Palestinians will be left homeless and forcibly transferred.

The original plan for the demolition of al-Bustan area was drafted in 2002. Two years later, a collective demolition order was issued to the residents along with an order to confiscate their lands for the proposed park. In protest of the plans, the residents of Silwan set up a tent in the centre of the neighbourhood and organised al-Bustan committee to engage the services of lawyers to file a case against the city municipality in Israeli courts.

According to the account of Fakhri Khalil Abu Diyab, under pressure from international and local human rights organisations, the city municipality eventually contacted the al-Bustan committee and requested that they draft a master plan and apply for housing permits for the residents. The committee dismantled the tent and did what the city municipality asked of them. However, the city municipality rejected the committee’s proposed plans claiming that they contradicted the municipality’s policies and the committee’s case was taken before the Regional Planning and Zoning Committee. In February 2009, the Israeli planning authorities again refused the necessary planning permission to the Palestinian residents. Consequently, the residents erected another tent and began holding weekly protest. Since then, Israeli occupying forces have raided the tent many times and have arrested those present. 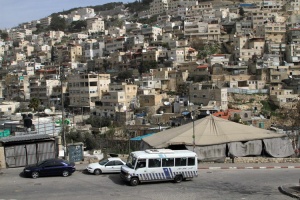 On 5 February 2012, residents of Silwan were issued an additional demolition order, this time for the solidarity tent. The order stated that the tent should be removed within one day or it would be demolished within 72 hours. The residents submitted an objection before the Israeli District Court where there will be a court hearing on 13 February 2012. Fakhri and the other residents of al-Bustan area fear that the demolition of the tent is the first step in the destruction of their neighbourhood and their eviction from East Jerusalem. (Al-Haq Aff. No. 7039/2012).