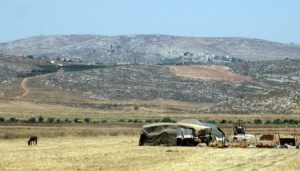 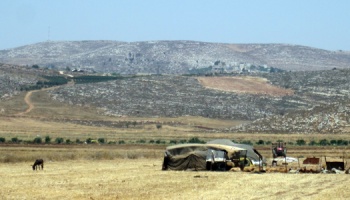 On Saturday 14 July 2012, ten Israeli settlers attacked a Palestinian shepherd and killed one of his sheep in Turmus ‘Ayya, a village to the north of Ramallah city. This is the second incident of settler violence against Palestinian shepherds that Al-Haq has documented in the past two weeks.

Hasan Mahmoud Abu ‘Alya, (49 years old), is a Palestinian farmer in Turmus ‘Ayya. For ten years, Hasan cultivated the land and used it to feed his 160 sheep.

On 14 July, at around 6:00 pm, while Hasan and his five-year-old grandson were walking their sheep on the land, they saw ten masked men holding knives, batons and rifles walking down a hill near an outpost called Adei Ad towards them. The masked men were speaking Hebrew. Hasan, who knew that the men were Israeli settlers from their religious clothing, feared for his grandson’s life and backed away from the settlers. He saw four of the settlers catching one of the sheep and slaughtering it. The other settlers were hitting the sheep with their batons and throwing stones at the flock. When Hasan tried to protect his sheep, he was stabbed in his right hand. He later received six stitches to close the wound.

Hasan then phoned his son Fadi, (27 years old), to ask for his help. Ten minutes later, Fadi along with other shepherds came to the area. Once the settlers saw the Palestinian shepherds approaching them, they left the area. At around 6:30 pm, Israeli police officers arrived at the scene to investigate the incident. The police questioned Hasan and his son Fadi and asked them to file a complaint in the Israeli police station located in Binyamin settlement within two hours.

Hasan, who has been subject to Israeli settlers’ violence on more than one occasion, recalls that the perpetrators have never been accountable by the Israeli authorities. (Al-Haq Affidavit No. 7566/2012)

Settlers in the West Bank enjoy a climate of impunity, which has resulted in an escalation in both the level of violence and the frequency of attacks on Palestinians. In the past two years, the number of settler attacks against Palestinians has increased by over 144 per cent.

Another striking example of settler violence incident took place on 7 July 2012, when Israeli settlers from Itimar settlement attacked shepherds in ‘Aqraba, a Palestinian village 17 kilometers south of Nablus. Five sheep were killed during the attack, in addition to four more being stolen. Twenty sheep were also injured during the incident. (Al-Haq Affidavit No. 7568/2012)

Al-Haq is gravely concerned that the reoccurrence of such attacks without any mechanism of accountability for the perpetrators will further encourage such violations and will continue to affect the livelihoods of Palestinian shepherds.