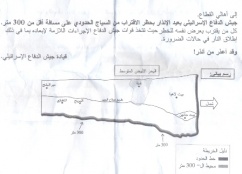 During the previous week, the Israeli military dropped numerous leaflets in Arabic on the Gaza Strip. The leaflets included two maps of the Gaza Strip with warnings for the population not to approach the border with Israel and about the danger posed by the Palestinian militants operating in the Gaza Strip. 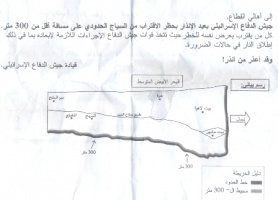 In January 2009, in the immediate aftermath of the military offensive code-named ‘Operation Cast Lead,’ the Israeli military dropped leaflets on the Gaza Strip, similar to those dropped last week. These flyers warned the Palestinian population of the Gaza Strip not to come within 300 metres of the border with Israel and that force would be used to prevent anybody from doing so.

The prohibition against moving within 300 metres of the border with Israel is a component of the prohibition against accessing the buffer zone area at sea and on land, imposed on the Gaza Strip by Israel. On land, it encompasses an area between 300 and 1,500 metres from the Israeli border. The buffer zone at sea, which in 1994 denied access beyond 20 nautical miles (NM), has been progressively reduced over the years. Currently it prohibits movement beyond three nautical miles (NM) from the cost. In addition, the buffer zone at sea denies access to a 1.5 NM area along the northern maritime boundary with Israel and 1 NM-wide area on the southern boundary with Egypt. However, no physical demarcation of the buffer zone is visible to the population, who faces continuous danger for the mere fact of working or walking in its proximity. Being that the buffer zone is not physically demarcated, Israel has failed in its duty as an occupying power to adequately inform the population of the exact extent of the buffer zone and of the applicable regime resulting from it. For more information on the buffer zone, please refer to Al-Haq publication Shifting Paradigms: Israel’s Enforcement of the Buffer Zone in the Gaza Strip.

Muhammad ‘Atallah Abu-al-Sheikh (48 years old) is a resident of al-Zawayda village, in the central district of the Gaza Strip. On 29 October, at approximately 6:00 am, while at home, he heard Israeli aircrafts and an explosion. Approximately ten minutes later, Muhammad heard children shouting outside saying that the Israeli forces had dropped leaflets. Once outside, he saw leaflets falling through the air. 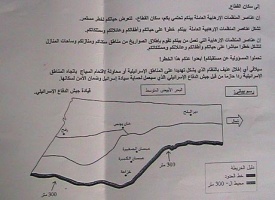 Some text and a map were printed on each side of the paper. One map showed the northern governorates of Gaza and Deir al-Balah. On the other side of the leaflet, another map showed the governorate of Deir al-Balah, Khan Younis and Rafah. Through the leaflets, the Israeli army warned the population of the Gaza Strip of the threats posed by the Palestinian militants operating in the area. The Israeli military demanded that the population take measures in order to prevent any future danger resulting from the presence of the Palestinian resistance in the Gaza Strip. The leaflet referred to the firing of rockets in the proximity of residential areas in the Gaza Strip and warned not to approach the Israeli border at a distance of 300 meters.

At the sight of the leaflets, Muhammad recalled the violent military attacks of Operation Cast Lead and he is concerned for the safety of his family. (Al-Haq Affidavit No. 7839/2012)