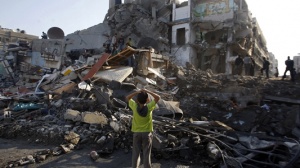 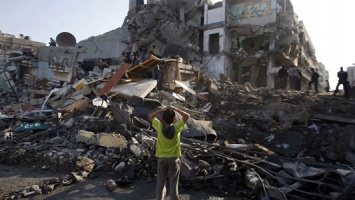 Throughout the last two weeks, the Gaza Strip has been under indiscriminate and disproportionate Israeli attacks. According to Al-Haq preliminary documentation, 173 Palestinians were killed between Thursday 8 November and the ceasefire agreement reached on Wednesday 21 November. This figure includes 113 civilians, of whom 38 were children and 13 women.

The recent escalation in violence began in the first weeks of November, when Palestinian civilians were killed by the Israeli military. On 4 November, an unarmed and reportedly mentally ill Palestinian man was shot and killed by Israeli forces when he entered the buffer zone. Palestinian medics were prevented from attending to the injured person for more than an hour, which they claim contributed to his death. On 8 November, Ahmad Abu Daqqa (13 years old) was fatally injured by Israeli soldiers during an incursion into the Gaza Strip. Two days later, Israeli forces launched at least four shells on an area where Palestinians were playing football, in Khan Younis governorate. Five civilians, including two children, died as a result.  These incidents resulted in retaliation and increased violence between Hamas and Israel.

Attacks came from both sides until 13 November, when a truce was agreed. That truce was broken by Israel with the extra-judicial killing of Ahmad Sa’id al-Ja’bari, one of the leaders of the military wing of Hamas, which was followed by the launching of the Israeli military operation code-named ‘Pillar of Defense.’

Al-Haq recalls that the recent escalation of violence erupted in the broader context of the ongoing Israeli occupation of the Gaza Strip, which includes the illegal regime of closure imposed by Israel since 2007.

During the recent Israeli military operation, the Palestinian civilian population in the Gaza Strip paid a tragic price. Beyond the 173 Palestinians killed, Al-Haq recorded at least 1,221 injuries, of which 445 are to children and 207 to women. The attacks have caused severe destruction to infrastructure in the Gaza Strip, and left 78 homes, 15 government buildings, two media offices, three cemeteries and one bank destroyed or severely damaged. Another 950 civilian buildings were partially damaged.

While welcoming the ceasefire, Al-Haq expresses its outrage over the human casualties and damage incurred by the Palestinian population in the Gaza Strip and deplores all killings of civilians. Al-Haq stresses once more that in armed conflict all parties must respect international humanitarian law, including the principles of military necessity, distinction and proportionality.

While a truce has been reached, it should be borne in mind that, given the impunity enjoyed by Israel in the face of violations committed against civilians, there is no deterrent, and as such, no guarantee that any such truce will be honoured. 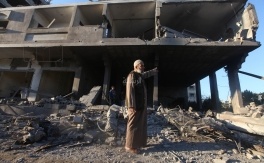 On 14 November, at approximately 5:00 pm, Yousef Jalal ‘Arafat, a 30-year-old construction worker, was returning to the home he shared with his wife, three children and his sister. Two hours had passed since the extrajudicial killing of Ahmad al-Ja’bari. When he was 150 metres from his home, Yousef saw a missile dropped by an Israeli aircraft hit his house, which took him five years to build, partially destroying it and setting it on fire. Immediately afterwards, a second missile struck his brother’s home, which immediately collapsed.

With the help of neighbours, Yousef began searching through the rubble for his family. He saw the head of his wife, Nisrin Amin ‘Arafat (27 years old) and managed to remove parts of the rubble to help her. His nine-year-old boy, Jalal, eventually answered Yousef’s calls, and he was found beneath one of the collapsed walls of the house. Jalal’s sister, Rinan (six years old), was trapped under the rubble not too far from Jalal. Jalal was eventually rescued, but Yousef had to wait for a winch to remove the debris that had buried his daughter. Approximately 25 minutes later, Yousef was holding the dead body of Rinan, who had suffered a severe injury to the head, two broken legs and whose chest was torn by shrapnel. In the meantime, neighbours informed Yousef that they found his other daughter Maria (11 years old) nearby, with her aunt. Maria had been playing on a swing in the garden and her aunt was watering plants when the first missile struck the area. Both Yousef’s sister and daughter had been hit by shrapnel on their legs.

When the ambulances arrived to transfer Yousef’s family to al-Shifa hospital, the Israeli military dropped a third missile on the entrance to his home. At the time of writing, Jalal is still in hospital recovering from a severe injury to his spine and cannot move his legs. Nisrin was released a week later after she received 12 stitches to close a wound on her left thigh and 14 stitches on her head. Maria and her aunt were released the same day of the incident as the hospital was struggling to deal with the huge number of injuries from across the city.

Now, Yousef, his daughter and sister are staying with his father along with another 15 family members. Nisrin is staying at her parents’ house in another area.

On 17 November, at approximately 9:00 pm, Naser ‘Ayyad al-Hashash (49 years old), who is unemployed and lives with his wife and eight children in the al-Hashash neighbourhood of Rafah, was watching the news when he heard two loud explosions, caused by two missiles fired by the Israeli military. The ceiling of the room collapsed on him and his family and several of the walls of the house fell to the ground. Naser and his wife immediately went to check on their children and at 9:30 pm, the Red Crescent ambulance took five of Naser’s family members to the hospital. They were released several hours later as the hospital had no capacity to accept new patients.

A week earlier, on 11 November, Naser’s brother, ‘Eid (65 years old), who lives with his wife and three children next to Naser, woke up at 00:30 am after an Israeli air strike landed nearby and severely damaged his home.

At the time of writing, Naser’s family was staying with a neighbour and his brother ‘Eid and his family were living with his son. Neither of their houses are fit for living in. Both brothers are worried about the future of their families as they are unemployed and there are no job opportunities in Rafah. In addition, they have no resources with which to re-build their homes.

On 18 November, at approximately 8:00 am, Iyad Yousef Abu Khousa (18 months old), his elder brother Suhaib (four years old) and their cousin Sarah Suleiman Khousa (three years old) were playing in the garden of their house when a missile fired by the Israeli military hit the wall surrounding their home. Iyad, who was the closest to the wall, was killed instantly by shrapnel that struck his head. Both Suhaib and Sarah sustained severe injuries when shrapnel hit their faces, head, abdomen and legs. At the time of writing, Suhaib and Sarah were still in hospital recovering from their wounds.

On 14 November, at around 9:00 pm, Naser Abdul Mu’ti al-Hanajra, (30 years old), left his home when he heard an explosion nearby. He saw his relative Mahmoud Hamad Abu Sawawin, (61 years old), a farmer with eight children, walking across a nearby field towards the location of the explosion. Mahmoud was about 30 metres from Naser when there was another loud explosion. Naser was thrown to the ground and lost consciousness.

Naser regained consciousness at the al-Shuhada’ al-Aqsa hospital in Deir al-Balah where he was told he had suffered from bruises to his chest and left leg. As a result of the missile that landed near his house, his wife Jacqueline (23 years old) sustained a head injury and her left arm was fractured. Nasser’s son Muhammad (three years old) had severe bruises all over his body.

Mahmoud was killed instantly by the second explosion. Two of his children were injured and hospitalised. When Naser returned home, he found that the eastern part of his house was severely damaged, the ceiling had collapsed and there was a crater in the field where the missiles had landed. Naser and his family members are currently staying at the house of a relative.

Israeli military repression of protests in the West Bank

Countless demonstrations against the Israeli military offensive on the Gaza Strip took place in the West Bank between 14 November and 21 November. The Israeli military resorted once again to excessive use of force against protestors, including the use of live fire on several occasions. Two Palestinians died of wounds sustained at demonstrations: Rushi Mahmoud al-Tamimi (31 years old), who was shot twice by rubber bullets and hit by live ammunition in his abdomen; and Hamdi Muhammad Falah (22 years old), who was shot four times with live fire directed at his head and stomach by Israeli soldiers in Hebron. In addition, the Israeli military arrested approximately 55 people in the West Bank in the last 48 hours.