During the past week, Al-Haq's field documentation has revealed a continuing campaign of intimidation and violence by Israeli settlers, who carried out a number of attacks against Palestinians and their property in the West Bank, including East Jerusalem. Despite Israel’s obligation to protect the life, property and rights of the occupied Palestinian population, Israeli forces continuously turn a blind eye to settler violence when victims are Palestinians.

On 20 December 2012, at around 6:00 am, Khaled, who lives in Majdal Bani Fadl village (Nablus governorate), was informed by his daughter that his two cars had been burnt. When Khaled went to check on his cars, he saw that his Mercedes had been completely destroyed by the fire, while his other car was partially burnt at the front. On the eastern wall of his house, Khaled noticed some spray-painted graffiti with a star of David stating that this was a “Price-tag [action] for dismantling Giv’at Migron outpost”. The screen of his kitchen window had also been damaged. 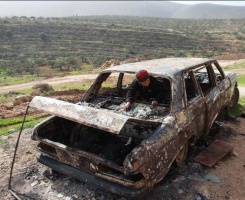 Khaled went to a Palestinian police station in the village of ‘Aqraba (Nablus governorate) to report the incident. He believed that settlers were behind the attack, because of the graffiti on his house and because the latter is located approximately 300 metres from the main road between Nablus and Jericho, which is largely used by Israeli settlers.

Khaled went back to his house at 8:30 am. At approximately 1:30 pm, seven Israeli military jeeps and settlers guards’ cars, including 15 Israeli soldiers and three Israeli police officers, came to Khaled’s house. One of the Israeli officers firstly asked him about the incident and his cars and then confirmed that the attack had been carried out by Israeli settlers. One of the Israeli soldiers told Khaled that the settlers responsible for the attack were from Esh Qodesh outpost, which is situated approximately two kilometres to the west of Khaled’s house.

The Israeli soldiers and police officers took photos of the burnt cars and of the graffiti. Before leaving the area at around 3:00 pm, the Israeli soldiers informed Khaled that he could submit a complaint on the case at the Howarra checkpoint coordination office, near Nablus. At the time of writing, Khaled is still seeking the necessary legal assistance to submit the complaint.

Khaled does not feel safe inside his house anymore and his four children constantly ask him whether or not they are going to be attacked again. (Al-Haq Affidavit No. 7970/2012)

On 17 December, at around 11:00 am, Huda Ibrahim Nassar, (65 years old) from Madama (Nablus governorate), was heading to al-Khalayla area, which is adjacent to Itzihar settlement along with her adult children, Muhammad (36 years old), Amir (26 years old) and Linda (37 years old). Huda’s eldest son, Ma’moun (39 years old), was in that area herding his sheep and earlier that day she had been informed that her son had been attacked by an Israeli settler. Ten minutes after leaving her house, Huda reached the area and found that Ma’moun was being held by a settler and two Israeli soldiers. Ma’moun was lying on the ground handcuffed behind his back and his face was bleeding, while the settler kept hitting his face and head with an M16 rifle. The two soldiers prevented Huda and Ma’moun’s brothers from helping him. They pointed their rifles at them and threatened to shoot them if they took any further steps. Huda tried to stop the settler from kicking and beating her son’s head but one of the soldiers hit her on the head with the butt of his rifle. Linda, who was next to her mother tried to defend her; as a result, the other soldier hit her on her back with his rifle. Huda recalls also seeing her son Muhammad being hit in the head by the two Israeli soldiers when he tried to help Ma’moun. (Al-Haq Affidavit No. 7971/2012) 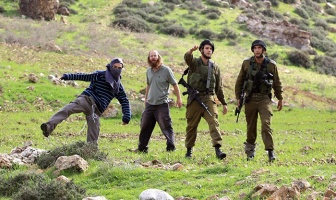 Amir recalls seeing the settler sitting on his brother’s chest and strangling him. He tried to help his brother but one of the soldiers started shouting at him and insulting him in Hebrew and another soldier hit him on his head and face with his rifle. Amir sustained a cut on the left side of his face.

A few minutes later some Palestinians from the village joined the Nassar family to help them. The situation then escalated to a confrontation between Palestinians and the approximately 40 settlers and 30 Israeli soldiers, who had gathered in the area.

One hour after the confrontations, the Israeli soldiers started throwing gas canisters and firing live ammunition on the Palestinian protestors. In the meantime, some Israeli soldiers dragged Ma’moun towards Itzhar settlement. When the Israeli soldiers began shooting gas canisters, Amir, his mother, sister and brother started running back to the village to avoid gas inhalation. Nevertheless, Amir was hit by a live bullet in his leg, fired by an Israeli soldier who was standing about 20 metres away from him. Amir then fell to the ground and saw blood coming out of the wound. Huda tried to stop the bleeding by putting her white scarf around Amir’s leg. He was then carried by two people from their village to a car and driven to the village, from where a Palestinian ambulance transported him to Rafidya hospital in Nablus.

In the ambulance, the paramedics bandaged the cut on his face and took care of his bruises and wounded leg. Once Amir was at the hospital, he was received by the emergency room. The doctors informed him that the bullet had exited his body but had created a small deep cut. At 4:30 pm, after having received the necessary medical assistance, Amir and his family were released from the hospital. (Al-Haq Affidavit No. 7971/2012)

According to the family, Ma’moun was held at the interrogation centre located in Howarra military camp for two days then he was transferred to the Majido prison in Israel for further investigation. On 26 December, Ma’moun’s first hearing was postponed to 18 January 2012.