On 30 April 2013, Salam As’ad al-Zaghal, 22, stabbed a settler near Za’tara checkpoint, south of the city of Nablus. Salam, who was subsequently shot in his abdomen and foot with live ammunition fired by Israeli soldiers, underwent surgery and is currently in Israeli custody at the Ramla prison medical clinic. His house was searched and his brother, Muhammad, 26, was arrested by Israeli forces. As a response to the killing, during the past week settlers have intensified their attacks on Palestinians living in the vicinity of settlements. Al-Haq documented 13 attacks varying from deliberate property damage to physical assault.

On 30 April 2013, at around 10:30 am, ‘Adel Abdul Hafith al-‘Amer, 32, saw about 40 settlers throwing stones at ‘Orif Boys’ High School, in ‘Orif village, Nablus governorate. ‘Adel, who is the ‘Orif municipality secretary helped the school’s principle to evacuate the students out of the school. Once the students were outside, the Israeli army shot gas canisters at the villagers who had gathered in the area to protect the school and the students from the settlers’ attack. ‘Adel sustained an injury to the head as a result of a stone thrown by a settler and was consequently hospitalised. (Al-Haq Affidavit No. 8573/2013) 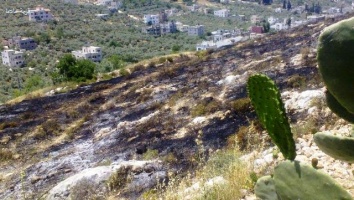 On 30 April 2013, groups of settlers from both ‘Yitzhar’ and ‘Bracha’ set fire to Palestinian olive groves in Burin, ‘Asira al-Qibliya, Madama and Huwwarra, Nablus governorate. Shadi Naser Ziyada, 27, saw about 30 settlers setting fields on fire and destroying olive saplings in Madama. When confrontations erupted between settlers and Palestinians, the Israeli army intervened and fired gas canisters and sound bombs towards the Palestinians to disperse them. (Al-Haq Affidavit No. 8574/2013)

On 04 May 2013, the residents of Ras Karkar, a small village to the west of the city of Ramallah, witnessed an attack, including the throwing of stones, by about 300 settlers on six Palestinian houses located near the ‘Ain-Ayyoub springs, to the west of the village. Subsequently, confrontations took place between settlers and Palestinians from the village. The Israeli army intervened to remove the settlers from the area and ended up shooting gas canisters, rubber coated metal bullets and sound bombs towards the Palestinians. As a result, several Palestinian cars were damaged and two Palestinians were injured and hospitalised. (Al-Haq Affidavit No. 8577/2013)

Sayil Muhammad Jarab’a, 53, owns a ten-dunum piece of land (one dunum equals 1000 m²) to the south of Beitin village, Ramallah governorate. ‘Giv’at ‘Atchav’ outpost is situated 100 metres from Sayil’s property. Farmers who own land near the outpost are obliged to coordinate with the Israeli army in order to access their land and have Israeli soldiers present to prevent settlers from attacking them while working. On 29 April 2013, Sayil was informed that the necessary coordination with the army had taken place and he would be able to work on his land the following day.

The next day, at 8:30 am, Sayil and three other farmers headed towards their property to the south of the village. Contrary to what Sayil had been led to believe, there were no Israeli soldiers present; however, that did not stop the farmers from working on their land. Two hours later, four young settlers wearing Jewish Orthodox clothing and accompanied by a dog walked towards Sayil, who was working on the part of his land that is located closest to the outpost. Sayil explained in English that he was going to finish his work and leave soon. The settlers walked back to the outpost, making phone calls along the way. Sayil thought that they were going to leave him alone and so he continued working. However, a few minutes later, eight masked settlers holding metal batons and shouting in Hebrew attacked Sayil and hit him on his head and body. Sayil consequently lost his balance and fell to the ground. The masked settlers continued beating him until one of the other farmers, Muhammad Abdul Jalil, 45, intervened to stop them. When the settlers saw Muhammad, they ran away.

While Sayil was lying on the ground and bleeding from his head Muhammad called for help and 20 minutes later Sayil was transferred into a Palestinian ambulance by residents of Burqa. When he arrived at the Palestine Medical Compound in Ramallah at around 12:00 pm, the doctors informed Sayil that he had six cuts on his head, a fracture to his skull, a hairline fracture to his vertebrae and bruises on his shoulders and arms. Sayil was only discharged from hospital on 5 May, after being given 50 stitches on his head.  (Al-Haq Affidavit No. 8580/2013)

Despite the fact that the killing of the settler near Za’tara checkpoint has caused an escalation of settlers’ attacks on Palestinians, it should be noted that incidents such as these are an ongoing trend. Between January and April 2013, Al-Haq has documented 58 attacks by settlers against Palestinians and their property. Last week’s acts of violence are notable not only for their number but also for the level of brutality displayed. Despite Israel’s obligation to protect the life, property and rights of the occupied Palestinian population, Israeli occupying forces continuously turn a blind eye to settler violence.