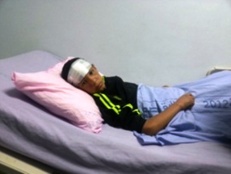 On 7 November, in two separate incidents, Israeli soldiers shot and killed two Palestinian men at the Za’tara checkpoint, south of Nablus and the Container Checkpoint, east of Jerusalem. Three days later, on 10 November, Israeli soldiers shot and injured two Palestinians while they were attempting to jump over barbed wires, to cross the Wall in Qalqilya.

On 5 November, Yousef Taha, 13, a student at Shuhada’ Qatanna Secondary School, located approximately 40 metres away from the Wall in Qatanna, was shot in the head with a rubber coated metal bullet by an Israeli soldier while standing in front of his school. 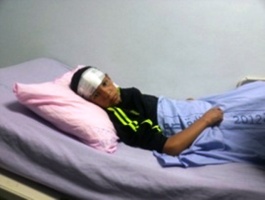 At 12:00 pm on Tuesday, 5 November, Yousef was leaving his school building when he spotted an Israeli military jeep on the other side of the Wall. As the jeep passed through a gate in the Wall into Qatanna, a group of around 10 students, aged 13-15, began throwing stones at it. In response, the soldiers dismounted from the jeep firing tear gas, sound canisters and rubber coated metal bullets at the children. Yousef stood by the school wall watching the clashes, which lasted approximately one hour.

At around 1:00 pm, while Yousef stood observing the clashes, he was shot in the forehead with a rubber coated metal bullet and immediately lost consciousness. Yousef remembers seeing the soldier who shot the bullet, approximately 10 metres away. Yousef recalls that the soldier could clearly see him holding his schoolbag and standing by the school wall.

Yousef was transferred to Ramallah Governmental Hospital. After regaining consciousness, he was told by his father that the rubber coated metal bullet had fractured his skull. Later that day, Yousef underwent surgery and was subsequently kept for two days in the Intensive Care Unit.

Later, Yousef’s schoolmates told him that after he was shot he fell to the ground unconscious, whereupon Israeli soldiers unleashed a police dog in his direction. His friends, however, managed to carry him to a private car, which took him to the nearby medical centre in Qatanna. After this, he was transferred by ambulance to the Ramallah Governmental Hospital. (Al-Haq Affidavit No. 9112/2013)

As the Occupying Power, Israel must comply with its obligations under international humanitarian and international human rights law. Al-Haq stresses that special protection must be accorded to children and their rights must be respected under all circumstances. In particular, when clashes take place in the vicinity of a school, Israeli soldiers must take all appropriate measures to reduce and prevent the deliberate injury of children and are prohibited from directly targeting them.

Furthermore, in a situation of military occupation characterised by a lull in hostilities, the rules governing the use of force are drawn from international human rights law. Accordingly, the Israeli military must respect the right to life of civilians in the Occupied Palestinian Territory (OPT) at all times. The use of firearms by the Israeli army can only be justified in self-defence against imminent threat of death, serious injury, or to defend someone else from the imminent risk of death. Moreover, in the event that someone is injured by a firearm, medical aid and assistance should be provided at the earliest time possible.

With respect to the account above, 10 children throwing stones at an Israeli military jeep cannot be considered a life threatening situation for fully armed soldiers in an armoured jeep. Accordingly, the use of rubber coated metal bullets was a disproportionate response and more force than was absolutely necessary. Furthermore, the fact that the bullet was fired at Yousef’s head demonstrates a clear disregard for the preservation of human life.

Al-Haq condemns the excessive use of force against Palestinian civilians, especially children, and calls upon the Israeli government to ensure that arbitrary and abusive use of force and firearms is punished as a criminal offence.