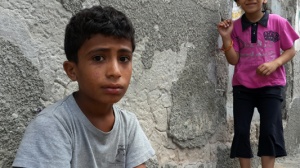 On 16 July 2014, seven boys were playing on the beach in Gaza City despite ongoing Israeli attacks on the Gaza Strip. The boys had been stuck at home, terrified and unable to go outside for days due to heavy shelling. On that day, Sayyed, 9, recalls that he was with his brother Muhammad, 11, and his cousins Isma’il Bakr, 10, Zakariyya Bakr, 10, ‘Ahed Bakr, 9, al-‘Arabi Bakr, 11, and Hamada Bakr, 13, when Isma’il suggested that they go and play on the beach. At approximately 3:30 P.M., Israeli gunboats shelled the beach, killing four of the children: Isma’il, Muhammad, Zakariyya and ‘Ahed. According to Sayyed, Isma’il was the first to be killed in the attack. During the attack, Sayyed saw his brother, Muhammad, being killed as the terrified boys tried to run away from the explosions. When they reached a nearby coffee shop they sought shelter and help from the employees. (Al-Haq Affidavit No. 9781/2014)

Three of the children survived the shelling of the beach: Sayyed, al-‘Arabi and Hamada. Muhammad Abu Wadfa, 23, who works at a coffee shop nearby, witnessed the shelling. He recalls that as he was walking to his workplace that day, he saw the boys playing on the beach as they usually do. He says: “I was happy to see them out and enjoying their time for a change”. Everyone in Gaza had been hiding indoors since the beginning of the offensive.

After a short while, Muhammad both heard and felt an explosion near the coffee shop. He ran outside to check on the children, only to see that they were running towards him in an attempt to escape. Muhammad recalls that the children looked terrified. One of the boys screamed at Muhammad to call an ambulance as his brother was wounded. Then another bomb hit the boys as they were running.

As the smoke of the bomb settled, Muhammad saw four of the boys’ bodies on the ground scattered and dismembered, while the surviving three boys hid behind a garbage can. Muhammad ran towards them and called for help. The coffee shop where Muhammad works was shelled as well. Muhammad saw his colleague, Fahd Abu Sultan, 23, lying on the floor drowned in blood. Moments later, many journalists were at the beach taking pictures of the children. An ambulance arrived and Muhammad helped carry the children. Muhammad then noticed that he too had been injured and was bleeding in the lower parts of his stomach. He was transferred to the hospital along with Fahd and the children. (Al-Haq Affidavit No. 9782/2014)