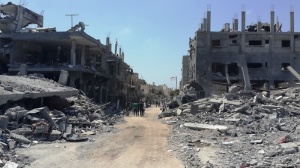 Twenty-year-old Habib, along with 17 members of his family, have been living in the Beit Hanoun UNRWA High School (A), which has been used as a shelter, for the past seven months. The family sought refuge there following Israel's attacks on the Gaza Strip that commenced in July 2014, and have lived there ever since. Their house which was located on Al-Masriyin Street was destroyed by the attacks. Habib's family have been living in one of the classrooms inside the school in very difficult conditions, lacking sufficient food, drinking water, and blankets. Although these items are supplied by UNRWA, the numbers are inadequate to care for the needs of the displaced. There are 70 other families living in the same school, constituting some 600 people who were made homeless following Israel's offensive on the Strip.

On Monday 16 February at approximately 5:00 pm, Habib saw smoke coming out of one of the classrooms on the second floor inside the school. He immediately went to investigate, along with his cousins. The room that was on fire was inhabited by Jad 'Izzaddin Al-Kafarna, 39, and 16 members of his family. The fire had been caused by an electrical issue. Habib learnt that inside the burning classroom were Jad’s son, nine-month-old 'Izzaddin Al-Kafarna, who was lying on a mattress and some of the child’s older siblings, who were looking after him while, their father went to the school's kitchen. 'Izzaddin's mother was sick and in hospital.

Habib and other young men did what they could to put out the fire until the civil defense authorities arrived. Habib could see the baby, but could not go back inside the room due to the heavy smoke. When Jad arrived at the scene, he ran inside the room in an attempt to save his child. The civil defense authorities arrived and asked Habib and others to break the back windows of the classroom to get the smoke out while they put out the fire. Habib did as he asked, and upon entering the room he saw nine-month-old 'Izzaddin lying on the ground, burnt and displaying no signs of life. The civil defense authorities managed to recover the baby’s body, and rescued the father who was injured by the fire. (Al-Haq Affidavit No. 10449/2015) Habib and Jad's other son, Samer, 17, was also injured as a result of the fire.

The living conditions in the Gaza Strip deteriorate further with each passing day. Gaza has been affected by both the series of Israeli offensives that have destroyed basic infrastructure  and the closure imposed on it. There are hundreds of families that are still living in UNRWA schools, caravans and tents - who have been falsely promised that their homes would be rebuilt. The current living conditions in these temporary housing facilities are unhealthy and unsafe. While the Cairo donors conference provided some hope for Gaza’s future, the reconstruction process has been ineffectual due to the continued closure of Gaza and other political issues, continuing to put the lives of Palestinians, especially children, at imminent risk.