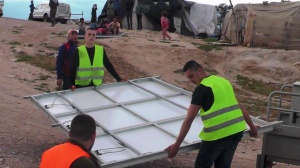 On 1 April 2015 at approximately 4:00 pm, the Israeli Civil Administration (ICA) accompanied with Israeli police, border police, a truck and other vehicles arrived at the Jahalin Bedouin community in Al-Khan Al-Ahmar area, East Jerusalem, dismantled and confiscated 12 solar panels. The solar panels were installed earlier that morning by Future For Palestine (FFP) as part of a three-month project, aiming to reach out to 23 Bedouin families in the community. Until recently, the community had just two solar panels, one for private use and one for the school[1].

Employees of the ICA arrived to the location and spoke to 'Eid Jahalin, leader of the community, and informed him that the two previously installed solar panels were illegal and that all solar panels installed within the community would be confiscated. 'Eid immediately contacted a lawyer named Shlomo Leker, who has worked with the Bedouin communities in Al-Khan Al-Ahmar. 'Eid also contacted international and national human rights organisations, asking them to interfere and halt the confiscation of the solar cells.

Israeli Civil Administration and Occupying Forces were present until 8:00 pm during which 12 solar cells were dismantled and confiscated. As a result, 11 families, which included 95 individuals, almost half of which are children, were affected. These individuals solely rely on the solar panels for electricity for daily use since Israel prohibits the community from connecting to the authorized electricity networks near them.

The Jahalin Bedouin community were originally displaced from the Naqab in 1950 and had to re-establish themselves on the outskirts of Jerusalem. However, due to Israel's settlement expansion policy, which involves expropriating Palestinian lands, the Jahalin Bedouin have been subject to forced displacement through different means. Bedouin communities in Area C are a vulnerable group who are constantly facing house and property demolitions and denied access to basic services such as electricity and water - all part of a comprehensive policy by Israel in an attempt to clear the area from Palestinian presence. More specifically, according to a UN OCHA report published in 2014, Bedouin communities in the hills to the east of Jerusalem are at risk of forcible transfer due to a relocation plan advanced by the Israeli authorities.

As an Occupying Power, Israel has an obligation to ensure that the basic needs of the population under its effective control are met. Article 11(1) of the International Covenant on Economic, Social and Cultural Rights, to which Israel is a State party, stipulates that states party to the Covenant must recognize the right of everyone to an adequate standard of living and to the continuous improvement of living conditions. Israel routinely breaches their duties by denying the community from access to electricity goes against the aforementioned. Additionally, the harsh conditions imposed on Palestinians, in particular Bedouin communities, may result in the forcible transfer of the community. Forcible transfer, both directly and indirectly, is a war crime under the Rome Statute of the International Criminal Court and constitutes a grave breach of the Fourth Geneva Convention.