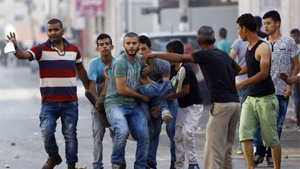 Al-Haq is deeply concerned about the deteriorating situation in the Occupied Palestinian Territory (OPT), and its severe impact on Palestinian lives. Since 1 October 2015, the Israeli Occupying Forces (IOF) have killed 95 and injured at least 8000 Palestinians. Five Palestinian homes have been punitively demolished. Additionally, Israeli settlers, often with the presence of IOF, have increased their attacks against Palestinian civilians and their property. Al-Haq further condemns Israel’s targeting of Occupied East Jerusalem.

Excessive Use of Force

In September, Israel relaxed the use of live ammunition by police in Occupied East Jerusalem, to permit soldiers to “open fire…when they face danger to any lives.”[1] The change in regulations in Jerusalem will likely establish a situation similar to that in the rest of the OPT, where the IOF illegally use lethal force against Palestinian civilians. Under international standards, the use of firearms is permissible as an absolute last resort in the case of self-defence or the defence of others against imminent threat of death or serious injury. Further, the use of firearms is permissible only when other extreme measures are proven insufficient.[2] Al-Haq has documented countless cases of excessive use of force where the IOF have showed complete disregard for Palestinians’ lives and safety.

Al-Haq affirms that the broadening of the use of lethal force against Palestinians in Jerusalem clearly illustrates Israel’s unwillingness to address the root cause of a recent escalation of violence in the occupied territory- the occupation. Further suppressing Palestinians through violent force will only heighten tensions.

Since February 2014, Israel has increasingly used punitive home demolitions as a form of collective punishment, which is prohibited under the Fourth Geneva Convention. On 4 October 2015, Israel partially demolished the home of Qais Al-Saadi in Jenin by launching military shells at the home, which set it ablaze. He shared the home with four other individuals. Qais, who Israel claims is affiliated with Hamas, managed to escape before being arrested. The IOF also raided the area surrounding Qais’ home, including the homes of several of his relatives. Clashes erupted between Palestinians and the IOF as a result of the targeting of Qais’s home, causing injury to twenty-two Palestinians.

Additionally, on 6 October 2015 Israel punitively demolished three homes in Occupied East Jerusalem, forcing ten people into homelessness. One home belonged to Ghasan Abu Jamal, who was shot dead by Israeli police in November 2014 after allegedly attacking a synagogue in West Jerusalem. Muhammad Ja’abes home was also destroyed. He was fatally shot after allegedly driving a bulldozer into a bus on 4 August 2014. Israel also irreversibly destroyed the home of Mutaz Hijazi by pouring cement into it. Mutaz was killed by the Israeli police after allegedly attacking an Israeli settler in October 2014. All three homes were in Occupied East Jerusalem. Al-Haq stresses the fact that all three men were extrajudicially killed before their homes were demolished, leaving 10 of their relatives homeless. The demolitions also affected adjacent houses and other property.

The current escalation in violence is also a result of the increase in the frequency and severity of attacks by Israeli settlers against Palestinians. Between 28 September 2015 and 4 October 2015 alone, Al-Haq preliminarily documented 29 incidents of settler violence in the West Bank. Settler attacks include shooting and beating of Palestinian civilians, vandalizing homes, obstructing Palestinians’ movement, including through blocking streets, and burning olive orchards and other crops. These assaults are the result of Israel’s systematic failure to provide accountability for attacks against Palestinians.

More than 500,000 Israeli settlers are currently present in the West Bank, including East Jerusalem, in Israeli settlements. Notably, such a transfer of civilians is illegal under the provisions of the Fourth Geneva Convention and considered a war crime under the Rome Statute of the International Criminal Court. Although it is Israel’s responsibility to take effective measures to protect the lives and livelihoods of the Palestinian population against attacks by Israeli settlers, the IOF often stands idly by or directly supports settler attacks.[3]

Since 3 October 2015, five Palestinians from Jerusalem have been shot dead by Israeli soldiers and hundreds others were injured. Confrontations between young Palestinians and the IOF have erupted in various neighbourhoods of the city including Shu'fat, 'Anata, and the Old City, protesting Israel's brutality.

In an unprecedented act, Israel barred Palestinians, with the exception of residents, from entering Jerusalem’s Old City for a 48-hour period on October 4. Israeli settlers and tourists were permitted to enter the area. Additionally, on October 8, Israel set up metal detectors at the entrances of the Old City of Jerusalem and in some of its neighbourhoods, claiming it was a "preventative measure" against attacks.

Prior to the ban, Israel continued to target the Al-Aqsa Mosque Compound through limiting Palestinian access to the holy site, often in order to allow settlers to enter. These provocative actions are aimed at further entrenching Israel’s control and illegal annexation over East Jerusalem, and continue to enflame tensions.

Al-Haq therefore calls on the international community to take immediate and concrete action to end Israeli violations of Palestinians’ right, including the right to life, freedom of expression, and the right to peaceful assembly. Given the impunity enjoyed by Israeli officials and citizens, the absence of meaningful action taken by the international community will only perpetuate Israel’s violent occupation at the expense of Palestinians’ rights.

Al-Haq calls on the international community to:

[2] United Nations Basic Principles on the Use of Force and Firearms by Law Enforcement Officials Adopted by the Eighth UN Congress on the Prevention of Crime and the Treatment of Offenders (1990), General Provision No 9.