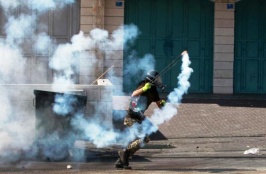 As Palestinian frustration over Israel’s occupation has reached a boiling point, Israel has continued to dismiss its obligations as the Occupying Power and instead escalated state and state-supported violence against Palestinians. These acts include: excessive use of force against Palestinian civilians, including extrajudicial killings, punitive home demolitions, restrictions on movement, the further fragmentation of the West Bank, including severe restrictions on Palestinians in Jerusalem, and an escalation of settler violence, often facilitated by the Israeli Occupying Forces (IOF).

The following information is based on Al-Haq field documentation and monitoring between 29 September and 14 October 2015. Incidents listed below are representative of the daily reality of Palestinians, but not exhaustive given the intensity and widespread nature of Israeli violations.

Change in Regulations in Jerusalem

Between 29 September and 16 October 2015, Israel killed 36 Palestinians,[1]including 7 children, and injured at least 1,400 individuals across the OPT and Israel. Israel has stepped up its arbitrary excessive use of force against Palestinians, especially in Occupied East Jerusalem.

In September 2015, Israel eased its open-fire regulations, permitting police to “open fire…when they face danger to any lives.”[2] The change in regulations has established a situation in Jerusalem similar to that in the rest of the OPT, where excessive, lethal use of force is the norm. Between 1 - 16 October, 13 Palestinians were killed in Jerusalem, another 23 were killed in other areas in the OPT, including two in Israeli settlements, and one Palestinian was killed in Israel.

In other measures, Israel decided to impose “minimum sentences of four years’ imprisonment for adults who throw firebombs, rocks or other” in conjunction with ‘increasing fines on adults, minors and their parents.’[3] The policy targets youth aged 14-18. This policy comes as a continuation of recent legislation adopted in the Israeli parliament in July to impose tougher penalties of up to 20 years in prison for individuals that throw rocks at vehicles and roads in Occupied East Jerusalem. Such measures do not apply to the rest of the West Bank, where Israeli military law and military orders are in effect.

Excessive Use of Force during Demonstrations in the OPT

Palestinians all over the OPT have participated in a surge of daily demonstrations and confrontations with Israeli Occupying Forces (IOF) on main roads, checkpoints, and the buffer-zone. In response, the IOF has suppressed these demonstrations and resorted to using rubber bullets, tear gas, sound canisters, and live ammunition in order to disperse the protestors. According to the Palestinian Ministry of Health, 550 Palestinians have been shot and injured with live fire since the beginning of October. Out of the 36 Palestinians killed, 18 were killed in demonstrations across the OPT.[4]

On 5 October 2015, 13-year-old Abd Al-Rahman Obeidallah was killed as he was standing 150-meters away from soldiers during a protest in Aida refugee camp near Bethlehem. Abd Al-Rahman was hit in the chest by a Ruger sniper rifle, which Israel has recently allowed its police to use against Palestinians in the OPT. The IOF later announced that Abd Al-Rahman was killed by mistake, as the soldier intended to shoot another protestor standing next to Abd Al-Rahman.

In the Gaza Strip, Palestinians have been protesting near the buffer zone. Since 1 October, nine Palestinian civilianswere killed in different areas adjacent to the buffer-zone.

On 9 October 2015, hundreds of Palestinians in Gaza participated in protests in solidarity with the rest of the OPT. The protests were held at different locations across the Gaza Strip and near the buffer-zone. Six Palestinians, including one child, were killed on that day. Another 83 were injured, of which 31 were injured with live ammunition.[5] On October 10, Jihad Obeid, 21, died as a result of injuries he sustained from the previous day. Jihad was shot with live fire in his abdomen. Also on October 10, two other Palestinians, including 10-year-old Marwan Barbakh, were killed with live fire in the Gaza Strip.

In a separate incident on 11 October 2015, an Israeli air strike completely destroyed the home of Yahya Hassan, resulting in the death of his five-month pregnant wife Noor Hassan, 25, and his three-year-old daughter Rahaf. Yahya and his son Muhammad, 5, were injured alongside three other people.

Israel's policy of collective punishment has been broadened. Most recently, Israel has set up flying checkpoints between cities in the West Bank, closed several other checkpoints which serve as points of access, and closed down Palestinian roads hence cutting off communities. Moreover, under the new measures the property of Palestinians involved in the alleged attacks will be confiscated and their residency rights in Israel will be revoked. In a further step, their families will be stripped of welfare payments from the National Insurance Institute. In the backdrop of these new measures remains Israel’s eight-year-long closure of the Gaza Strip.

In September, Israel adopted a series of measures against Palestinians in Occupied East Jerusalem in light of the recent escalations in tension. It is important to note that the situation should be perceived in the context of Israel’s colonial policies directed against Palestinians, inter alia, Israel’s policy of fragmentation, the illegal annexation of East Jerusalem and Israel’s settlement enterprise which thrives on Palestinian lands and resources. In this regard, the targeting of Al-Aqsa Mosque Compound and Palestinian civilians in Occupied East Jerusalem should be viewed as a perpetuation of these policies.

Following a cabinet meeting on 13 October 2015, Israel may authorize a closure of Palestinian areas in Jerusalem. Following the meeting, Al-Haq documented cement blocks and checkpoints set up in Jabal Al-Mukabber, Silwan, Al-‘Essawiyya, Sur Baher and Ras Al-Amoud, separating tens of thousands of Palestinians from the rest of the city. Additional measures taken by the Cabinet include revoking the permanent residency status of Palestinians who conduct attacks, and the confiscation of their property.

On Wednesday, 14 October 2015, Israel also approved a proposal to hold the bodies of alleged Palestinian attackers killed during attacks, thereby denying families from burying their loved ones. Israel continues to hold the bodies of 10 Palestinians killed since 1 October. This is not a new practice by Israel; it has been used previously to “deter other Palestinians from carrying out attacks” and as a bargaining chip for prisoner exchanges or exchanges of Israeli soldiers bodies.[7]

In the past two years, Israel has increasingly resumed its unlawful policy of punitive home demolitions as a form of collective punishment against Palestinians.

Under the aforementioned new measures in addition to demolishing the homes of individuals that allegedly carry out attacks, Israel will prevent families from building a new home on the same site, effectively confiscating the land.[8]

On 6 October, Israel punitively demolished three homes in Occupied East Jerusalem, making ten people homeless. One home belonged to Ghassan Abu Jamal, who was shot dead by Israeli police in November 2014 after allegedly attacking a synagogue in West Jerusalem. Muhammad Ja’abes's home was also destroyed. He was fatally shot after allegedly driving a bulldozer into a bus on 4 August 2014. Israel also irreversibly destroyed the home of Mutaz Hijazi by pouring cement into it. Mutaz was killed by the Israeli police after allegedly attacking an Israeli settler in October 2014.

On 15 October, Israeli authorities issued six demolition orders in Ramallah, Nablus and Jerusalem for the families of Palestinians accused of carrying out attacks against Israel. The families were given 72 hours to move or object to the demolitions in Israeli courts. Karam Al-Masri and Yehia Haj Hamad, both from Nablus, are currently imprisoned in Israeli custody and accused of carrying out an attack early October 2015 which killed settlers. Their families were given till 17 October 2015 to evict their homes in Nablus.

Since 1 October 2015, Israeli forces raided numerous cities and towns in the OPT during which it ransacked houses and arrested hundreds of Palestinians. According to the Palestinian Prisoners Association, 800 Palestinian civilians, almost half of them children, have been arrested by the IOF in the West Bank, including East Jerusalem, the Gaza Strip, and Israel. In some instances, those arrested suffered various at the hands of the IOF; such as being shot at, delayed medical assistance, intentionally delayed visits by their lawyers.

On 2 October, the IOF raided Jabal Al-Taweel neighbourhood in Al-Bireh causing confrontations to erupt between the IOF and Palestinian youth. A 15-year-old was injured with live ammunition, detained, and later released.

On 3 October, the IOF raided Nablus, 'Askar refugee camp, Rujib village and Al-Dahiyya, during which it broke into houses, searched them, and arrested at least 12 people. Confrontations erupted with the residents that led to the injury of 12, including a five-year old child. The Abu Hashya family in ‘Askar refugee camp received a house demolition order as punishment for their alleged son’s attack against Israelis in November of last year.

On 4 October, the IOF raided the city of Jenin and Jenin refugee camp. One of the residents in the camp was evicted from his home. Artillery was then launched at it by the IOF, partially destroying the house. Confrontations erupted afterwards; 22 were injured with rubber and live bullets while four Palestinians were arrested. In another incident on 4 October, the IOF raided the Arab Hospital in Nablus and arrested a patient.

On 5 October, the IOF raided the village of Surda, north of Ramallah, and broke into Muhannad Al-Halabi's house (who was shot dead on 3 October 2015 by the IOF after he allegedly stabbed settlers in the old city of Jerusalem) and beat its residents while detaining them. 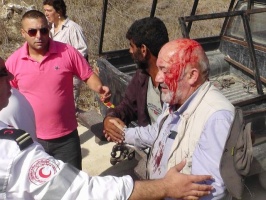 Between 29 September and 11 October, Al-Haq documented at least 42 incidents of settler attacks against Palestinians throughout the West Bank, including Nablus, Hebron, Qalqilya, Jerusalem, Salfit, Bethlehem, Ramallah and Al-Bireh. These include stoning Palestinian cars, houses and people; trespassing on Palestinian villages and property; setting fire and otherwise damaging Palestinian-owned crops; and attacking, beating, and even shooting at Palestinians. These attacks have resulted in the injury of tens of Palestinians and the damage of their property.

On 2 October, five Israeli settlers attacked and beat Waleed Qawar near Bethlehem while in his car. Waleed stepped out of his car and one of the settlers shot him three times, injuring him in the leg. On the same day, a group of settlers set fire to a Palestinian-owned car at the entrance of Beitillo near Ramallah and wrote hate graffiti on one of the walls nearby.

On 3 October, Israeli settlers attacked a Palestinian home near Ramallah using fireworks. The settlers also threw stones at the house in the presence of the IOF who fired tear gas and sound canisters in the yard of the house. One of the residents was injured, and the house was damaged.

Between 8 and 10 October, Israeli settlers stoned Palestinian houses in Al-Masharqa, Jaber, Al-Kassara, and Wadi Al-Husein neighbourhoods in Hebron. Residents of these neighbourhoods responded by throwing stones at the settlers. Instead of diffusing the situation and halting initial attacks by settlers, the IOF shot tear gas, sound canisters and rubber bullets at the residents to protect the settlers.

[1] On 14 October 2015, Palestinian prisoner Fadi Al-Darbi, 30, died in Israeli prisons. It is believed that Fadi has died as a result of a stroke while in prison without receiving proper medical help form Israeli prison authorities. Also, on 15 October 2015, according to the Palestinian Ministry of Health Riyad Dar Youssef, 46, died following an assault on 14 October by the IOF as he was returning from his olive harvest. He suffered a heart attack thereafter, and it is believed to have been the result of the attack.