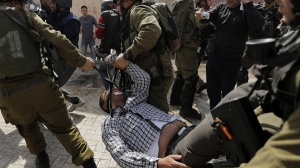 To respond to this increase in deathly confrontations and the threat of an upsurge of overall violence, it is urgent for the Israeli government to recognise its responsibility in the uprisings that regularly engulf the Palestinian people and take note of the harmful effects of its policies.

The rioting by the Palestinian youth in bloody clashes with the Israeli army and police in the OPT including Jerusalem are signs of deep frustrations and further illustrate the crisis that the Palestinian civil society is living through.

The killings that cost the lives of seven Israelis  in the old city of Jerusalem are the tragic and inevitable outcome of the continued occupation of the OPT.

More than 500,000 settlers are living illegally in the West Bank including in East Jerusalem in clear violation of international humanitarian law, especially the 1949 Fourth Geneva Convention, and constitutes a war crime according to Article 8 (2)(b) (viii) of the Rome Statute.

Since February 2014, the Israeli government has increasingly, systematically demolished Palestinian homes as a sort of collective punishment which, according to the Fourth Geneva Convention is strictly forbidden. During the last few months, Israeli settlers, in the presence of the army and sometimes under their protection , have intensified their attacks against Palestinian civilians and their properties. Between 28 September and 4 October 2015, the NGO Al Haq, an FIDH member organisation, documented 29 incidents of violence perpetrated by settlers in the West Bank, violence that included shooting with live ammunition, physical attacks, vandalism of property and farms and obstructing the movement of Palestinians.

"FIDH condemns all types of violence. It is the responsibility of the Israeli State, occupying power, to preserve the life of all of its citizens, Palestinians and Israelis alike. Incitement to murder is unacceptable." declared Karim Lahidji.

Since 24 September 2015, the Israeli government has authorized soldiers to shoot when they feel a threat: this decision will unquestionably increase the already-alarming number of incidents of cold-blooded murder of civilians committed by Israeli soldiers and the disproportionate use of force by the Israeli army.

The Israeli government’s non-respect for international law and the guaranteed impunity for Israeli settlers who commit crimes regularly and more and more frequently in the OPT foster religious extremism in the two countries, encouraging violence and obstructing the peaceful coexistence of the two peoples.

A policy such as this will aggravate an already-explosive political and security situation both locally and at the regional level and will incite the Palestinian demonstrators to carry out acts of violence and play into the hands of extremist groups.

FIDH, and it member organisations, Al Haq, PCHR and PCATI condemn all acts of violence against all civilians and support the peaceful mobilisation of the Palestinian civil society for the defence of its civil , political, social and economic rights.

In view of the continued violation of international law, FIDH and its member organisations Al Haq, PCHR and PCATI feel that it is necessary for the international community to explicitly and tangibly state its commitment to respecting the rights of the Palestinian population in the OPT and the Palestinian citizens of Israel. If it doesn't and recent events have proven so, the Israeli government will continue to violate Palestinians’ right to life and freedom of speech and assembly.

FIDH, Al Haq, PCHR and PCATI urge the ICC Prosecutor to state publicly that the preliminary examination underway on the situation in Palestine covers all crimes within its jurisdiction that are committed on Palestinian territory and that their perpetrators must be held accountable.

Our organisations urge the Israeli authorities to stop violating international law, in particular to stop using disproportionate force against the demonstrators, to lift the blockade against Gaza, to put an end to the settlements and to hold those responsible for the ongoing human rights violations accountable in order to end the perpetuation of impunity.