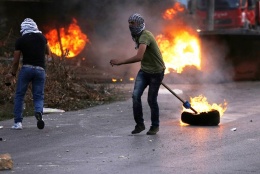 Note: this focus was updated on 22 October 2015 following new data on Palestinian casualties and injuries by Al-Haq and the Palestinian Red Crescent

Israel’s unlawful killing of Palestinians is a continuing feature of Israel’s occupation. Al-Haq reminds Israel and the international community that “intentional lethal use of firearms may only be made when strictly unavoidable in order to protect life”.[3] As such, law enforcement officers must apply non-violent means before resorting to force and firearms.[4] These restrictions on the use of force and firearm are consistent with Israel’s obligation to preserve and respect Palestinian right to life. Al-Haq highlights that the below mentioned Palestinian victims did not pose an imminent threat to the lives of the soldiers at the time that they were killed. In light of this, Israel must ensure prompt, impartial, independent, effective, transparent investigations into the killing of Palestinians and hold all perpetrators accountable. Additionally, the international community must take effective measures to ensure the protection of the occupied Palestinian population.

On 22 September 2015 at 7:40 am, Hadeel Al-Hashlamoun, 19 years old, was shot at the entrance of Al-Shuhada Street at "Checkpoint 56". Prior to shooting Hadeel, Al-Haq documentation reveals that two Israeli soldiers at the checkpoint had pointed their guns at Hadeel and shouted at her in Hebrew to move back but she remained in her location. A witness at the scene, Fawwaz Abu Eishe, told Hadeel to move backwards as a soldier shot a bullet near her foot resulting in her retreat backwards. Fawwaz moved a plastic divider, separating the entrance and exit lane, so that Hadeel could move to the exit lane and away from the soldiers. As Hadeel moved to the exit lane, a soldier pointed a gun to her head. The soldier ordered Hadeel to put her hands up in the air and turn towards the wall, then lowered his gun and shot another bullet at the street near Hadeel. In the meantime, four more soldiers arrived at the scene. The soldiers shouted at Hadeel and ordered her once again to put her hands up and turn to the wall while pointing their guns at her and Fawwaz. Fawwaz asked Hadeel to drop her bag and put her hands up but Hadeel did not respond and remained in her position without moving.

One of the soldiers then aimed at and shot Hadeel in her left foot. Hadeel fell to the ground and a dropped a knife from her hand. She had hid the knife under her niqab. The same soldier then approached Hadeel and shot her again in the right foot. At this point, the soldier further approached Hadeel and shot her several times at a distance of about a meter. Hadeel was shot in her upper and lower body. About 30 seconds later, he shot a bullet at the upper part of her body again.[5] As seen in a publicised video issued by Pal Media Centre, Hadeel was left to bleed to death at the scene without being provided any medical assistance. Soldiers and settlers stood around her dead body as she bled.

On Sunday 4 October at approximately 8:00 pm, Palestinians assembled in Tulkarem to protest Israeli policies and settler violence in the OPT. Around one hundred Palestinians marched towards the Taybeh Street in Tulkarem where they were met by at least ten Israeli soldiers. Upon the demonstrators’ arrival at the location, the demonstrators threw stones at the soldiers who immediately responded by shooting tear gas and sound canisters. Red laser beams were also seen from the soldiers' side in the direction of the demonstrators. Approximately an hour into the confrontations, the soldiers resorted to live ammunition from about a 55 metre distance. The confrontations lasted until at least 1:00 am that night. During the night, Huthaifa Othman Abu Suleiman, 18 years old, was shot with live ammunition in the abdomen and died as a result. At least two other Palestinians sustained injuries, including Omar Hilmi who was shot in the chest and thigh while Ahmad Jallad was shot in the foot. (Al-Haq affidavit no. 11052/2015)

On 5 October at approximately 12:30 pm, confrontations erupted between young Palestinians and Israeli Occupying Forces (IOF) near Aida refugee camp in Bethlehem. Young Palestinians were throwing stones at the Annexation Wall's gate to the east of Aida refugee camp while the IOF initially retaliated by firing tear gas at them. Approximately 15 minutes later, three Israeli soldiers came out of the mentioned gate as one of them took position to shoot. At that time, two live bullets were fired at the youth. Abd Al-Rahman Shadi Obeidallah, 13 years old, was standing approximately four metres from where the confrontations were taking place at the time of the shooting.  Al-Haq's witness saw Abd Al-Rahman covering his chest as he bled from his nose. Immediately, Abd Al-Rahman and another injured were taken in a car to the hospital. An hour later, Abd Al-Rahman was pronounced dead at the Beit Jala Governmental Hospital. (Al-Haq affidavit no. 11051/2015)

On 8 October at approximately 3:25 pm, the IOF raided Shu'fat refugee camp in Jerusalem. Two forces, made up of about 200 soldiers, were in one the camp's alleys leading to Subi Abu Khalifa and 'Alqam residences. On their way, young residents of the camp threw stones at the forces, hindering them from breaking into Abu Khalifa and 'Alqam residences. In response, the IOF arbitrarily shoot live bullets, leaving holes in the walls of some of the residences in the alley. As the forces approached the Abu Khalifa residence, the confrontations escalated. In the meantime, some soldiers were located at the entrance of the camp while others broke into several houses in order to locate themselves on the roofs.

Al-Haq's witness recalls seeing two Israeli soldiers on the roof of one of the buildings - near the Abu Khalifa residence - one of whom was carrying a long rifle. Underneath the same building, there were four Israeli soldiers excessively shooting live ammunition. Approximately 50 metres from the same building, a young Palestinian man, Wesam Jamal Faraj, 20 years old, was throwing stones at the soldiers from the fourth floor of another building. At one point, the witness heard consecutive shots but saw that Wesam was still throwing stones. Moments later, the witness heard one shot and saw Wesam fall to the ground. Three Palestinians attempted to reach Wesam to provide assistance but they were all shot and injured. Wesam was left to bleed for about 12 minutes until the IOF evacuated the premises. Wesam was shot in the heart with a live bullet which led to his death. (Al-Haq affidavit no. 11053/2015)

On 9 October, following Friday prayers, Ziyad Nabil Sharaf, 18 years old, participated in a demonstration on the eastern side of the buffer-zone in Al-Shuja'iyya, east of Gaza city. Hundreds of young Palestinians protested Israel's prolonged occupation of Palestinians. There were also some Palestinian youth throwing stones at Israeli soldiers close to the wire fence of the buffer-zone. Israeli soldiers retaliated by resorting to live ammunition. Ten minutes into Ziyad's participation in the confrontations, he was shot and killed by the IOF. Ziyad was shot in the chest with a live bullet that exiting from his back. (Al-Haq affidavit no. 11056/2015)

[1] The figure excludes the killings of Ahmad Sharaka, 13 years old, during confrontations with IOF near Al-Jalazoun refugee camp on 11 October 2015. It also excludes Fadi Al-Darbi, 30 years old, who died in Israeli prison on 14 October 2015. It is believed that Fadi died as a result of a stroke while in Israeli custody and did not receive proper medical treatment from Israeli prison authorities. It also excludes Riyad Dar Youssef, 46 years old, who died of a heart attack on 15 October 2015. According to the Palestinian Ministry of Health, Riyad suffered a heart attack following an assault by the IOF on 14 October 2015. Similarly, Huda Muhammad Darwish, 65 years old, is excluded as she suffered a severe asthma attack on 19 October 2015. Huda died on her way to hospital as the vehicle carrying her was held up at an Israeli checkpoint at the entrance of Huda's neighbourhood, Al-'Essawiya, Jerusalem. The list also excludes Muhannad Al-Aqabi, 21, who was killed on 18 October 2015 in Beer Al-Sabe'.

[3] United Nations Basic Principles on the Use of Force and Firearms by Law Enforcement Officials, provision 9 (1990).