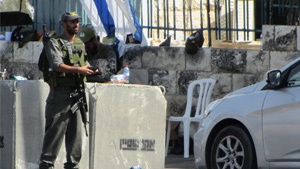 Over the past few weeks, Israel's policy of collective punishment has spiralled, affecting Palestinians all over the Occupied Palestinian Territory (OPT), particularly in Jerusalem. Among other measures, Israel has deepened its practice of fragmenting Palestine and isolating communities from one another. In Jerusalem, where approximately 300,000 Palestinians reside, Israeli authorities have cut off Palestinian neighbourhoods by way of cement blocks, checkpoints and barriers on streets. Within the walls of the Old City itself, Israeli police have set up a number of checkpoints and metal detectors in various neighbourhoods. In the backdrop, Jerusalem remains separated from the rest of the West Bank by the Annexation Wall.

As a result, Palestinian life has been further burdened as they face increased difficulty in accessing hospitals, schools, and their work. For example, on 19 October 2015, Huda Muhammad Darwish, 65, from Al-'Essawiya, died on her way to hospital due to Israel's closure of her neighbourhood. According to Al-Haq preliminary documentation, that day, Huda fell ill after inhaling tear gas that was fired by Israeli forces at the neighbourhood. As she was being transferred from her home to hospital in her son's car, they were stuck at an Israeli checkpoint at the eastern entrance of Al-'Essawiya for at least half an hour. The son plead with the soldier at the checkpoint to let them pass given Huda's condition but instead the soldier searched their car and delayed them. Huda was pronounced dead 10 minutes after arriving to hospital.

Israel routinely closes Palestinian areas, collectively punishing all residents therein. The Fourth Geneva Convention strictly prohibits all forms of collective punishment and measures of intimidation against protected people. Furthermore, such checkpoints and closures impede on Palestinians' freedom of movement, which has a broad impact on other rights, including but not limited to the right to life, right to health, and right to education.