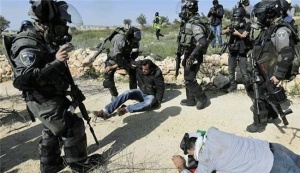 Over the past week, violence has continued to escalate in the Occupied Palestinian Territory (OPT) mainly triggered by the various measures and policies adopted by Israel. Israel has continued to dismiss its obligations as an Occupying Power and instead intensified state and state-supported violence against Palestinians. Since the beginning of the year, 77 Palestinians have been killed in the OPT and Israel,[1] 46 of whom were killed in October.

The following information is based on Al-Haq field documentation and monitoring between 12 October and 20 October 2015. Incidents listed below are representative of the daily reality of Palestinians, but not exhaustive given the widespread nature and intensity of Israeli violations.

Excessive Use of Force during Demonstrations in the OPT

Demonstrations continue to take place in various areas across the OPT. In response the Israeli Occupation Forces (IOF) maintains its use excessive and lethal force against Palestinian protestors. Between 12 to 18 October 2015, 24 Palestinians were killed in the OPT and Israel, 6 of whom were killed during demonstrations in Bethlehem, Nablus, and the Gaza Strip.

On 13 October 2015, Mu'taz Ibrahim Zawahreh, 27, was killed near the northern entrance of Bethlehem during a demonstration. According to Al-Haq preliminary documentation, Mu’taz threw a Molotov cocktail toward Israeli soldiers and then turned around. He was then shot by Israeli soldiers and fell to the ground. Other protestors and the ambulance were not able to reach Mu’taz as Israeli snipers were standing on top of one of the nearby buildings. When protestors finally reached him, they had to run for about 120 meters to get to an ambulance. Mu’taz was transferred to a hospital where he underwent surgery. However, Mu'taz sustained deadly injuries as a result of a dumdum bullet (explosive bullet) which hit his right shoulder, lodged into his chest and caused internal hemorrhage.

On 16 October, in the Gaza Strip, Shawqi Jamal Obeid, 37, succumbed to an injury he sustained on 9 October. Shawqi was shot while at work in a cement factory located near the buffer zone. Confrontations had erupted that day between Palestinian youth and Israeli forces close to the buffer-zone east of Jabaliya. Shawqi was shot in the head with a live bullet and was admitted to the hospital on the same day.

In Nablus, Ihab Jihad Hanani, 19, was killed during a demonstration near Beit Furik. The IOF was firing live and rubber-coated bullets at demonstrators as well as an excessive amount of tear gas and sound canisters. As a result seven civilians, including two children, were injured, mostly in the legs and thighs. Ihab in the chest, and was placed in an ambulance to be transported to the hospital. The IOF obstructed the ambulance’s route, and stopped the ambulance to take photos of Ihab, delaying him reaching the hospital. Ihab later died in the hospital due to the injury he sustained.

In Hebron, 18-year-old Fadel Al-Qawasmeh, was shot by an Israeli settler near Al-Shuhada Street on 17 October. According to an eye-witness, the settler had a scuffle with Fadel then followed him for about 7 meters. The settler later drew his gun and shot Fadel dead with at least three bullets. Israeli soldiers quickly arrived to the scene, and did nothing to restrain the settler. The IOF still holds Fadel’s body.

On 14 October, Riyad Dar Yousef, 46, was attacked and assaulted by the IOF while on his way home from the olive harvest.  According to the Palestinian Ministry of Health, a day later, Riyad suffered a heart attack as a result of the IOF’s conduct.

As part of its collective punishment policies, Israel continues to hold the bodies of Palestinians killed during alleged attacks against Israelis. To-date, the bodies of nine Palestinians from Jerusalem, in addition to four others from Hebron, remain with Israeli authorities.

Forced eviction and sealing of homes

In the early hours of 19 October 2015, Israeli police imposed a de-facto curfew in the Palestinian neighbourhood of Batn Al-Hawa in Silwan, east of Jerusalem. During that time, Israeli police evicted two Palestinian families from their homes in order to facilitate the takeover of Israeli settlers. The two houses belonged to Abdallah Abu Nab and his brother Sabri Abu Nab. These forced evictions left nine people homeless. The IOF used pepper spray and police dogs to evict the families and prohibited all movement in the neighbourhood.

In yet another act of collective punishment, on 20 October 2015, Israel punitively sealed the apartment of Palestinian prisoner Maher Al-Hashlamon in Hebron, where four people reside. The apartment is located in a building with 10 apartments and 45 residents. All of the residents were confined to one apartment while the IOF sealed Maher’s apartment.

Israel continues to tighten its grip over Palestinian cities and towns by enclosing them and erecting checkpoints for exit and entry. As a result, Palestinians' movement between cities of the West Bank has been severely obstructed.

Since 14 October, Israel has deepened its fragmentation of Occupied East Jerusalem and cut off Palestinian neighbourhoods by using cement blocks, checkpoints and barriers. On Friday, 16 October 2015, a large number of Israeli soldiers and police were positioned across East Jerusalem and several checkpoints and metal detectors were set up in the Old City.  All Palestinian male worshippers, under 40 years of age, were prohibited from accessing the Al-Aqsa Mosque Compound. And many Palestinian worshippers over 40 years of age were arbitrarily denied entry into the Old City of Jerusalem as well as access to the Al-Aqsa Mosque.

On 20 October, the IOF erected a flying checkpoint on the Nablus-Jenin street south of Jenin. For over an hour, the IOF inspected Palestinian civilians and cars that passed through the area. Israeli soldiers aimed their guns at the cars and civilians during the inspections.

The IOF has continued its practice of raiding and ransacking Palestinian homes and arbitrarily arresting Palestinians. Since the beginning of October 2015, at least 800 Palestinians were arrested, many of whom are children.

On 12 October, the IOF raided and searched several homes in ‘Atil village, north of Tulkarem during which they arrested 13 Palestinians.

On 13 October, the IOF, along with the Israeli intelligence, raided the home of Abd Al-fatah Yahya in Al-‘Araq village, west of Jenin. Abd Al-fatah is the father of Tareq Yahya, who is currently imprisoned in Israel and accused of allegedly stabbing a soldier in Al-Afula on 8 October 2015. The IOF questioned Abd Al-fatah about his son and took measurements of the home. They did not give the family a demolition order. On the same day, the IOF arrested Baker Qabha and Mustafa Qabha in Barta’a near Jenin after raiding and searching their homes.

On 15 October, the IOF raided the village of Tel near Nablus. Confrontations erupted during which one Palestinian was injured and four others were arrested.

On 16 October, Fathi Qotob, 20, was shot in the hand and chest with live ammunition after the IOF raided his home in the old town of Nablus. Fathi was shot as he was opening the door. He was left to bleed without being provided with medical assistance for almost an hour until he was transferred to a hospital. Another Palestinian, Samed Abdalla, was arrested during the raid.

Israeli settlers continue to provoke and attack Palestinians all across the OPT. These attacks come in various forms: damaging Palestinian crops, shooting at and beating Palestinians, including children, as well as throwing stones at their homes and property.

On 14 October, Israeli settlers fired gunshots and attacked and stoned Palestinians as they harvested their olive trees in the village of Burin, near Nablus. The settlers attacked and injured a Palestinian farmer, Abd Al-Mohaymen Asous, 37, and a British volunteer, David Amos, 66. The settlers also set several olive trees on fire near the same area. Moreover, on 16 October, Israeli settlers stoned Zakariya Attallah's car in Huwara, south of Nablus, causing the car to tip over and the car was damaged as a result.