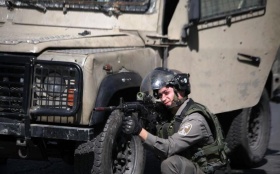 Throughout the occupation, Israel has used security concerns as a pretext to fragment and further its control over Palestinian Territory. Since the beginning of October 2015, Israel has escalated its assault on the rights of Palestinians, through excessive use of force and unlawful killings, arbitrary arrest and detention, a variety of collective punishment measures, including punitive house demolitions, and both direct and indirect support of settler attacks.

Since the beginning of October 2015, 81 Palestinians from the West Bank and the Gaza Strip have been killed by Israeli Occupying Forces (IOF), while over 8,000 have been injured. Flashpoints of violence include Jerusalem and Hebron, where the impact of settlements and settlers are most tangible. Over the years, Israel has divided Hebron for the benefit of Israeli settlers while aiming to eradicate Palestinian presence from the city. Actions taken by Israel to do so include violations of the Palestinian right to life, via the IOF’s use of excessive and lethal force, the imposition of limitations on movement and access within the city via Israeli checkpoints and curfews, and settler attacks which are often met with impunity.

Cleck here to read the full Special Focus on Hebron: A Microcosm of the Israeli Occupation