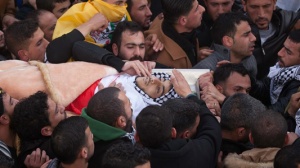 On Monday, 16 January 2017, Qusay Hasan Al-‘Amour, 17, was killed by Israeli Occupying Forces (IOF) near Bethlehem. Qusay was killed after seven IOF jeeps raided the town of Tekou’, east of Bethlehem at around 2:20 p.m.

After four military vehicles withdrew, clashes erupted on the eastern part of town. Young protestors, who threw stones, were scattered in the area between trees, while the IOF was positioned on the main street. The IOF fired tear gas, sound bombs and rubber-coated bullets at the protestors.

According to an eye witness, Qusay was masked and sitting on the ground; upon standing, the IOF shot him.  Further, journalist Hisham Abu Shakra, who captured a video after Qusay was shot [see below], told Al-Haq that at approximately 3:53 pm, he heard five expanding (dumdum) bullets using Ruger rifles being fired. He turned his camera to a man lying on the ground and recorded the incident. Qusay was not moving and Israeli soldiers were standing at approximately 80 meters away from him. Another protestor standing next to Qusay tried to move him, but Israeli soldiers started excessively firing rubber-coated bullets towards him.

About seven Israeli soldiers then ran towards Qusay. One of the soldiers placed his knee on Qusay’s throat, while trying to handcuff him but failed to turn Qusay’s left hand behind his body. The soldiers then carried the injured young man by his hands and feet, while his head dangled and hit the ground. The IOF then placed him next to a military jeep.

The soldiers undressed Qusay, while one of them brought a medical kit. The soldiers moved the body to the back next to another military jeep. They put him on a stretcher, and then inside the vehicle at approximately 3:57 pm. Clashes escalated as protestors wanted to retrieve Qusay’s body from the jeep, while the IOF excessively fired rubber-coated bullets at them. The military jeep with Qusay’s body moved away to the eastern entrance of town. At around 4:25 pm, an Israeli ambulance arrived to the scene. Although the Palestinian Red Crescent Society (PRCS) ambulance was present, Israeli soldiers obstructed the ambulance and prevented the Palestinian paramedics from reaching Qusay. (Al-Haq affidavits 17/2017 and 18/2017).

Qusay’s body was delivered to the PRCS later by Israeli authorities. The PRCS transferred Qusay’s body for examination at Beit Jala Hospital, where the doctor announced that Qusay was killed after he was shot by three bullets: hitting his thigh, abdomen, and the left side of his chest.[1] According to the PRCS four other people, including Qusay’s sister, were injured by rubber-coated bullets which hit the lower parts of their bodies.

Al-Haq condemns the IOF’s continuous disregard of the lives of Palestinians, including children. Since the beginning of the year, four other Palestinians were killed by the IOF in the OPT, including one in the Gaza Strip, one in Jerusalem and two in the rest of the West Bank.

Israel, as the Occupying Power, must respect the fundamental right to life of the population of the occupied territory. Instead, Israel systematically uses indiscriminate, arbitrary and excessive force against Palestinians. Qusay did not pose an imminent threat to the lives of soldiers and as such was unlawfully killed. Article 3 of the Code of Conduct for Law Enforcement Officials specifies that the use of firearms should be exceptional and is considered an extreme measure; use of force, in all circumstances, should be guided by the principles of necessity and proportionality. Notably, a wilful killing of the protected population constitutes a grave breach under the Fourth Geneva Convention and a prosecutable war crime under the Rome Statute of the International Criminal Court. While Israel has reportedly launched an investigation into the killing of Qusay by the Israeli Occupying Forces (IOF),[2] in light of Israel’s continued “shoot-to-kill policy” and prevailing culture of impunity, Al-Haq urges the international community to monitor this and other investigations and ensure accountability for violations of international law.