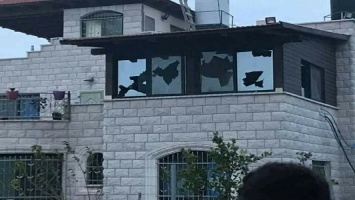 Over the past week, Al-Haq has monitored and documented an increased number of incidents of settler violence against Palestinians and their property in the occupied West Bank. The attacks include throwing stones at Palestinians, their homes and cars, raiding villages and privately owned Palestinian land, as well as cutting down privately owned Palestinian trees. The incidents took place in various locations throughout the West Bank, including in the Jordan Valley, Nablus, Toulkarem, and Qalqiliya. It should be noted that while settler attacks against Palestinians are a recurring phenomenon, often carried out under the protection of the Israeli Occupying Forces (IOF), and supported by a culture of impunity; the incidents of last week come following the killing of an Israeli settler near Nablus on 9 January 2018.

On 9 January 2018, Israeli settlers attacked Palestinian passers-by south of Nablus at approximately 8:30 pm. Ayman Farouk ‘Abdat, 25, states that while he was driving his truck on the ‘Yitsahar’ bypass road, he passed a military checkpoint and was surprised to see another about one kilometre away. There were two military jeeps and about 10 Israeli soldiers at the second checkpoint. The cars in front of, and behind, Ayman’s truck also had a Palestinian license plate. The Israeli soldiers ordered the three vehicles to stop about 100 metres away from the Huwwara-Yitsahar roundabout and turn off the engines. They were prevented from passing through the road for about an hour. Then about 200 Israeli settlers, some of whom were masked, and who came downhill from the Yitsahar settlement, started throwing stones at Ayman’s truck. The stones hit and broke the truck’s window from the right side. Ayman had to shelter himself underneath the steering area. The stone throwing continued heavily for about five minutes until a soldier opened the door of the truck and got Ayman out, after the settlers had retreated. Ayman’s right hand was bleeding and he was covered in shattered glass. The soldier ordered Ayman to leave immediately. Ayman sought medical help shortly after and was admitted to hospital then released on 10 January morning. (Al-Haq Affidavit No. 8/2018) 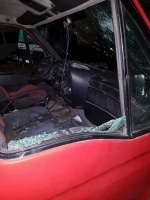 On 10 January 2018, at approximately 3:30 pm, the village of Far’ata, Qalqiliya, was attacked by hundreds of Israeli settlers from the adjacent settlement outpost of Hafad Jil’ad. At the time, Anas Yasser Yamin, 22, a resident of the village, recalls hearing people in the village screaming, “the settlers have attacked” from his home. He then walked to neighbouring houses and witnessed approximately 300-400 settlers coming from the direction of the aforementioned outpost. The settlers were throwing stones at Palestinian homes from a distance of approximately 30 metres. Anas tried to approach the homes that were attacked to help but there were too many settlers, ‘vicious and screaming in Hebrew’. Some settlers started running towards Anas, throwing stones at him. Anas immediately returned to his house and locked it up as the settlers followed him. He gathered his eight siblings, five of whom are children, and put them in a safe place. The settlers surrounded Anas’ house, throwing stones at it. Anas tried to throw back some of the stones in an attempt to scare the settlers away. However, there were too many settlers surrounding the house from the southern and eastern side, about five metres away from the house. The settlers continued to throw stones at the house, breaking two windows and the solar water heater. Anas’ sister and brother, aged 23 and 8 respectively, were hit with stones in the head, shoulder, and knee. Three Israeli military jeeps arrived at the scene 20 minutes later, then the settlers started to retreat towards the outpost. (Al-Haq Affidavit No. 9/2018)

Twelve-year old Intisar Yacoub Tawil, also a resident of Far’ata, was on the roof of her house with her parents and two siblings at the time of the incident. They saw about 500 settlers approaching the village, who came within approximately 100 metres of their home. In her affidavit, Intisar states:

“I was very scared when I saw them [the settlers] running towards our home and neighbouring homes in the eastern part of the village. When the Israeli settlers arrived, they were dressed in civilian clothes…tens of them spread and started throwing stones at our house and the nearby houses. At this moment, I felt very scared… I started screaming and crying and calling for help… I went with my siblings and parents to the kitchen and stayed there as it was the safest place and out of reach from the stones being thrown by settlers. I could hear screams in Hebrew, which I do not understand. I could also hear the sound of stones hitting the walls and breaking glass [in the house]… We were in the kitchen for about half an hour… [L]ater on that evening, I got a panic attack. I tried to sleep but I was shaking. There were also Israeli soldiers in the village shooting bullets and sound canisters between the houses which scared me even more. Paramedics had to come to our house to give me an injection to calm down. I still get afraid and I have nightmares when I think of the settler attack on our home.” (Al-Haq Affidavit No. 10/2018)

Under international law, Israel, as the occupying power, is prohibited from transferring its civilian population into occupied territory. The presence of settlements and settlers in the West Bank constitutes a grave breach of the Fourth Geneva Convention and amounts to a war crime under the Rome Statute of the International Criminal Court. However, Israel continues to ignore its obligations under international law, primarily by means of appropriating Palestinian land and allowing for settlement expansion and construction.1

Th presence of settlers in the West Bank and their close, illegal, proximity to Palestinian civilians has resulted in increased incidents of settler violence. Settlers commit violent crimes against Palestinian civilians with impunity by the Israeli authorities. As an Occupying Power, Israel has an obligation under international humanitarian and human rights law to safeguard the rights of civilians in occupied territory, including their access to private and public property. Instead, the IOF shields settlers who carry out violent attacks, while the Israeli authorities provide substantial incentives for settlers to transfer into unlawful settlements in the West Bank.