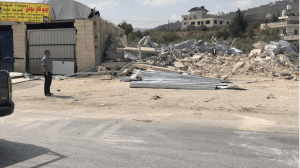 Of all death incidents, 15 Palestinians were killed in completely calm circumstances. These were killed by the IOF in the absence of tension on the scene. The rest were murdered in the context of demonstrations, raids, or Israeli aggression on the Gaza Strip.

Palestinian deaths included 73 children and 43 women. The Israeli occupying authorities also withheld the bodies of 16 Palestinians, bringing to 82 the number of bodies withheld since April2016.

During the reporting period, nine Palestinians died in peculiar conditions. Of these, Maher Sa’sa’, a 45-year-old Palestinian political prisoner, died in an Israeli prison as a result of medical negligence. Three young men died as a result of a drone explosion off the coast of the Gaza Strip. These had hauled up an Israeli drone in their nets, which had fallen into the sea and contained explosives. The remaining victims died while they were being chased by the IOF or unintentionally run over by Israeli settler vehicles.

During the first half of 2021, the Israeli occupying authorities demolished a total of 270 Palestinian public and private properties.

The Israeli occupying authorities demolished 101 homes. The majority of these homes (99) were destroyed, allegedly due to the lack of Israeli-issued building permits. The other two homes were demolished on punitive grounds.

Thirteen (13) homes were located in the city of Jerusalem, 86 in Area C, and two in Area B. Home demolitions resulted in the displacement of 520 Palestinians, including 250 women, 264 children, and 157 school pupils. Of all those displaced, 95 were original refugees.

While 12 were under still construction, 89 of the demolished homes were already completed. The absolute majority of the latter were inhabited. The Israeli occupying authorities did not allow an opportunity to the owners of 46 homes to evacuate their belongings from their homes before the demolitions were carried out. Having received demolition notices, the owners of 18 homes lodged objections before Israeli courts to prevent the demolition of their homes. However, these homes were removed. Thirty nine (39) families had their homes demolished earlier on one or more occasion(s). Having been reconstructed, the Israeli occupying authorities demolished these homes once again.

During home demolitions, members of 16 affected families were violently harassed, attacked, or physically assaulted. At the time of demolition, one demolished home was not owned by its inhabitants, causing loss for both the residents and the home owner. After their homes had been pulled down, the vast majority of affected families had to rent residential flats or sought refuge in their relatives, friends or neighbours’ homes until such time they could rent a shelter.

A total of 167 private structures were demolished during the first half of 2021. Of these, 153 structures were located in Area C, so designated by the Oslo Accords, and 13 within the Israeli municipal borders of Jerusalem.

Of all demolitions, three private structures were in close proximity to settlements, settler bypass roads, the Annexation Wall, or areas under the threat of settlement plans. Of these, 101 structures used to provide a main source of livelihood to affected family members.

At the time of demolition, just 14 private structures were under construction. The rest were already finished buildings.Three owners of the affected structures had applied for building permits either before construction or before demolition. It is worth noting that this number of permit applications is low due to the fact that the Israeli occupying authorities do not issue building permits. Hence, Palestinians generally do not submit applications for such permits. All the more so, submitted applications did not help relevant applicants receive permits nor protect them against demolition. Their structures were demolished just like those belonging to persons who did not apply for building permits in the first place. Twenty eight (28) owners of structures with demolition notices filed challenges against the demolition of their property. However, the Israeli occupying authorities rejected these official petitions and demolished all affected structures. This indicates that recourse to the legal mechanisms, which Israel claims that Palestinians can use, does not change the Israeli policy. It demonstrates that the Israeli legal apparatus is complicit with the occupation regime.

Before their private structures had been demolished, 67 affected families were subject to other abuses and attacks by the IOF. These violations were not necessarily related to demolitions. For example, early on, the IOF demolished other structures or killed, arrested or assaulted members of these affected families. Of all demolitions, 51 structures were destroyed for at least the second time after they had been reconstructed and affected families had recovered from previous demolitions. The owners of 55 structures reported that the Israeli occupying authorities did not allow them an opportunity to evacuate their possessions before demolitions were carried out, resulting in heavy financial losses.

The Israeli occupying authorities demolished three public facilities, all located in Area C. These included a water well, a mosque, and agricultural roads (two in Hebron and one in Tubas). The cost of the construction of all demolished public properties totalled NIS 240,000.

The IOF and Israeli settlers committed hundreds of other violations throughout the reporting period. According to Al-Haq documentation, in addition to killings and demolitions, the IOF perpetrated a variety of abuses, including arrests, confiscation of property, injuries, house raids and searchers, beatings, physical violence, and torture. The IOF also assailed medics, denied access permits or permits to receive medical treatment, and placed restrictions on the right to freedom of movement.

In May 2021, the Israeli occupying authorities launched a military aggression on the Gaza Strip, causing massive destruction as well as enormous human and material losses. At the same time, the IOF engaged in an intense campaign of repression against Palestinian demonstrations across the West Bank, Palestinian cities inside the Green Line, and city of Jerusalem. There were in protest against attempts to displace residents of the Sheikh Jarrah neighbourhood, seizure of, and denial of Palestinian access to, the Damascus Gate area in Jerusalem.

In the first half of 2021, two Palestinians were killed in the West Bank. Nizar Banat, a political activist, was murdered while he was being arrested by Palestinian security personnel in the Hebron area. Munther Hamdiyyah, who had been wanted by Palestinian security agencies, was shot while he was being chased by security officers. After he had been injured, Hamdiyyah was carried and placed in the back of a military vehicle, in disregard of the fact that he had sustained several bullet wounds. Hamdiyyah was pronounced dead at a later time.

During the reporting period, the Palestinian Authority (PA) and de facto authority in the Gaza Strip committed many abuses. Al-Haq documented a total of 89 violations perpetrated by Palestinian official authorities. Multiple abuses were committed, most notably, arbitrary detention, violations of fair trial guarantees, inadequate conditions of detention, infringements on the right to freedom of expression, house raids, and use of force to disperse peaceful assemblies.

In varying proportions, all Palestinian security agencies in the West Bank and Gaza Strip were involved in human rights abuses. First and foremost, violations were committed by the Palestinian Police, followed by the Intelligence, Preventive Security, and Internal Security agencies.

The reporting period saw an overall deterioration in the human rights situation. This was in conjunction with the promulgation by President Mahmoud Abbas of the Law by Decree No. 7 of 2021 Concerning the Amendment of the Law No. 1 of 2000 on Charitable Associations and Civil Society Organisations, as Amended. Abolition of the Palestinian legislative and presidential elections also led to widespread resentment and discontent among Palestinian political forces and grass-roots communities. These had seen the elections as a favourable opportunity for peaceful change within the Palestinian political system. After the elections had been cancelled, Palestinian security agencies carried out large-scale arrests and served summonses to political activists and candidates on several electoral lists across the West Bank, curtailing the space of freedoms furnished by the agreement to hold elections and reach an internal Palestinian reconciliation. In addition to arrest campaigns, systematic repression intensified in the aftermath of demonstrations, which have taken to the streets in protest against the killing of Nizar Banat, a political activist and candidate for legislative elections, in late June 2021 as at the time of reporting.

Consequences of the death of political activist Nizar Banat

At dawn on Thursday, 24 June 2021, Nizar Banat, a political activist, died while Palestinian security personnel were attempting to arrest him. In partnership with the Independent Commission for Human Rights, Al-Haq continues to investigate the death incident. A comprehensive report is due to be published following the investigation. The death of Banat has had numerous consequences.

The incident has provoked a wave of protests in several cities across the West Bank, demanding that perpetrators be held to account. Protestors hoisted banners, calling for political reforms and general elections. In response, Palestinian security forces used extreme methods, incitement against protestors, social pressure, and extortion to curb and delegitimise the protest movement.

In the city of Ramallah, Palestinian security agencies, including uniformed and non-uniformed personnel, repressed several demonstrations sparked by the death of Banat. Security agencies fired tear gas canisters and stun grenades in heavily populated areas. Assisted by non-uniformed members, security personnel severely beat protestors and assaulted journalists, lawyers, human rights defenders despite the fact they put on respective identification jackets and badges. Older persons and young people were assailed with sticks and hands. Women and men were dragged along the city streets in the full view of the press. A group of demonstrators were also subjected to verbal and physical assaults, libel, and slander by Palestinian uniformed non-uniformed security personnel.

Eyewitness M. A. recounts the repression of protestors over two days:

[1] The report does not provide a comprehensive coverage of all demolitions in Jerusalem.

[2] In relation to homes, Al-Haq is informed by two primary criteria: (1) the owner, and (2) status of the home as to whether it is inhabited or not. Accordingly, if three uninhabited housing units belonging to the same owner are demolished, Al-Haq considers all three units as one home, combining their surface areas as one home. For example, in Wadi al-Humos, the Israeli occupying authorities demolished more than 70 housing units, with multiple uninhabited units belonging to the same owners. Hence, the surface areas of these units were combined and entered as 14 homes only. Likewise, Bedouin homes usually include more than one residential tent. Al-Haq counts all tents, which serve as rooms or other facilities such as kitchens or toilets, of the same structure and household as one home. For instance, if a family lives in four tents, including two as rooms, one used as kitchen and the other as a toilet, these are all counted as one home.

[3] In many cases, a commercial premise belongs to the same owner, but consists of, e.g., more than one barracks. This is counted by Al-Haq as one commercial premise despite the fact that it comprises several barracks, tents, or structures unless the owner or type of commercial premise is different. For example, if an animal farm is made up of three barracks, but are all owned by the same owner, the surface area of this farm is combined and entered into the Al-Haq databank only once. This is also the case of storage facilities, which form an integral part of a home. These are counted as an inseparable part of the home.

[4] Al-Haq does not provide a full documentation of these violations. Hundreds of abuses are documented as a representative sample, giving an indicator of the nature of these abuses.

[5] Al-Haq does not provide a full documentation of these violations. Hundreds of abuses are documented as a representative sample, giving an indicator of the nature of these abuses.