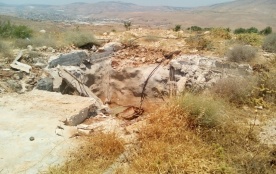 Between 10 and 16 June 2019, Al-Haq documented the demolition of homes, water wells, and animal barns, as well as the extension of a water line for Israeli settlements and outposts running through private Palestinian property, in the West Bank. Notably, the demolitions of public or private property outside of military operations violates international law, in particular Article 53 of the Fourth Geneva Convention. The permanent measures to provide water infrastructure for Israeli settlements underscores Israel’s goal of de facto annexation of the West Bank.

Demolition and Destruction of Water Wells and Olive Trees in Tamoun, Toubas

On 11 June 2019, Israeli occupying forces (IOF), comprising of four military jeeps, accompanied by two white jeeps belonging to the Israeli Civil Administration, and two JCB and CASE bulldozers, arrived in the Um Kbeish area, east of Tamoun, south of Toubas, to carry out demolition orders. The military declared the area a closed military zone, while the bulldozers razed and destroyed two wells used for collecting water, along with a fence surrounding the land. In addition, about 240 olive trees were also cut and destroyed during the demolition operation. One of the wells had belonged to the Palestinian Ministry of Agriculture and was used to irrigate olive trees in Um Kbeish. The other water well belonged to Jihad Yousef Bani Odeh and his siblings, who together own the nine dunums of land where the demolition took place. It should be noted that Yousef and his siblings possess documents proving ownership of the land in plot 26(1).

The Bani Odeh family has planted their land with olive trees since 2012, and faced financial hardships in maintaining its continued irrigation. Initially, in 2012, Yousef bought plastic water tanks which he used to fill with tankered water, costing 300 shekels (approximately 83 USD), and requiring up to six water tanks per year. The Israeli authorities issued him with a “removal notification” for the tanks. In 2014, Yousef and the family constructed a water well, funded by the United Nations Food and Agriculture Organization, which enabled them to cut the costs of water. Following its construction, the Israeli authorities issued another “removal notification” for the water well under the pretext that the land constituted “State land”. Yousef and his family filed a complaint after receiving the notice and had a court hearing set for 24 June 2019. Notwithstanding, the demolition took place on 11 June, prior to the scheduled court hearing.[1]

Extension of Water Lines for Israeli Settlements in Sinjel, Ramallah

On 11 June 2019, in the village of Sinjel, a contractor working for the Israeli water company, Mekorot, razed Palestinian private agricultural land owned by the residents of Sinjel, about two-three kilometers from the built-up area of the village. The contractor stated that a pipeline was to be built for Mekorot. According to the contractor’s map, the pipeline would start from the Israeli military camp, passing by Giva’t Haro’eh outpost and into the settlement of Ma’aleh Levona, running through an agricultural road, and cutting through 60 dunums of private agricultural land used by Sinjel’s residents to cultivate olives, almonds, and wheat. The affected land belongs to more than 20 residents from Sinjel, who have records proving their ownership. Notably, the municipality of Sinjel had started to survey these lands about a year and a half ago, in order to register them in the Palestinian Tabou. According to the Mayor of Sinjel, Mu’taz Tafsheh, the project is a continuation of the water line established by the Israeli occupying authorities between the settlement of Shilo and the military camp, which started in 2013.

It is important to note that the “Israeli Defense Forces” had issued an “order to construct a water line to Ma’aleh Levona”,[2] signed by the “Director of Water Affairs”, on 13 January 2019. The order is based on the authority granted to the “Israeli Water Authority” by virtue of Military Order No. 92 of 1967 with regards to Water Laws in the West Bank. According to Tafsheh, the order was not delivered to the residents of Sinjel until May 2019, when it was then hung on the door of one of the shops in the west side of the village, away from where the works have taken place. The copy of the military order that the Israeli authorities delivered did not include a map. According to Tafsheh, the water line poses a threat to the area, by strengthening and expanding settlements and outposts unlawfully built on Sinjel lands. The order will result in the denial of access of Palestinian residents to their agricultural land, leaving the lands uncultivated and subject to confiscation by the Israeli authorities.

Between 11 and 13 June 2019 Sinjel’s residents protested the construction of the water line, staging a sit-in, in the area. In response, the contractor moved the bulldozers and other equipment to a hill about 500 meters away. On 12 June, the residents identified a Volvo bulldozer, four caravans, a tent, water tank, gas tank, pipelines and a fence in the original location. On 18 June, at approximately 1:00 pm, Al-Haq’s field researcher documented a Volvo bulldozer carrying out excavations and razing the targeted area.[3]

The destruction and appropriation of water sources in Tamoun and Sinjel, and Israel’s construction of water infrastructure to supply the Giva’t Haro’eh outpost and Ma’aleh Levona settlement, highlights Israel’s water discrimination and segregationist practices in limiting Palestinian access, extraction, and allocation of water, while exploiting Palestinian water for the benefit of Israeli nationals in the settlements. Critically, Palestinians are allocated less water than Israeli settlers in the OPT, who consume over six times the amount of water allocated to Palestinians. The drinking water allocation promised to Palestinians under the Oslo Accords II was reduced by almost 20 percent in 2010. Israel extracts 89 per cent of the water resources in the West Bank, forcing Palestinians to rely on Israel’s water company, Mekorot, for at least a third of their domestic water supply.

Meanwhile, Israel has prevented Palestinians from building their own water infrastructure in the OPT and water structures without permits, permits that are almost impossible to obtain, are subject to demolition.[4] Consequently, about 270,000 Palestinians in Area C are affected by Israeli water and sanitation restrictions and 95,000 receive less than 50 percent of the World Health Organization’s recommendation of 100 litres of water per day, and over 83,000 receive drinking water that is of poor quality. This forces Palestinians to pay for expensive and unregulated water. Water scarcity has also limited Palestinians ability to cultivate their lands. According to the Toubas governorate, the amount of available land for cultivation has shrunk from approximately 15,000 to 8,000 dunums in the past few years, due to limited access to water for Palestinian farmers, and the larger water quantity distributed to Israeli settlers.[5]

Appositely, all people have the right to water under international law, as recognized by General Comment No. 15 of the UN Committee on Economic, Social and Cultural Rights, which states that the “human right to water entitles everyone to sufficient, safe, acceptable, physically accessible and affordable water for personal and domestic uses” as well as for the production of food.[6] Access to safe drinking water is also affirmed in Article 14(2)(h) of the Convention on the Elimination of All Forms of Discrimination against Women,[7] Article 24 of the Convention on the Rights of the Child,[8] and Article 28 of the Convention on the Rights of Persons with Disabilities.[9]

The demolitions by the IOF also exemplify the impact of Israeli Military Order 1797. This order states that newly built structures may be demolished if the Palestinian owners of the structures do not appeal a demolition order with an approved master building plan and building permit within 96 hours from the time that the notice is posted “next to” the structure. Palestinians must also prove that the structure had been built for six months and that it had been inhabited for a minimum of 30 days. With the near impossibility of having building permits approved in the West Bank at all, providing the IOF with an approved master building plan and permit within 96 hours is virtually impossible. Consequently, Military Order 1797, in requiring such a quick turnaround time, strips Palestinians of their right to due process, in violation of international law. Even if Palestinians manage to do this, their structures may still be demolished.[10] Article 53 of the Fourth Geneva Convention prohibits the destruction of private property, unless “absolutely necessary by military operations.”[11] The razing of private agricultural land for a water line in Sinjel, is not necessary for military purposes but rather is for the benefit and expansion of illegal Israeli settlements.

Israel’s restrictions placed on Palestinian access to adequate and safe water for drinking, and discriminatory targeting of water resources, not only violates numerous international human rights law provisions governing rights to access water for consumption and agriculture, but also assists in creating a coercive environment to force the transfer of Palestinians from villages, located in proximity to illegal Israeli settlements. Article 49 of the Fourth Geneva Convention states that “the Occupying Power shall not deport or transfer parts of its own civilian population into the territory it occupies.”[12]  In this vein, the implementation of Military Order 1797 resulting in the displacement of Palestinians, violates Article 7 of the Rome Statute which states that forcible transfer is a crime against humanity.[13] It further violates Article 43 of the 1907 Hague Regulations, which provides that an Occupying Power should maintain the laws in force in the country that it is occupying.[14] In the case of the West Bank, this means that Jordanian Planning and Construction Law must be upheld.[15]

[2] Military order in Arabic available on file with Al-Haq.

[4] Water for One People Only: Discriminatory Access and ‘Water-Apartheid’ in the Occupied Palestinian Territory  (Al-Haq), 8 April 2013, http://www.alhaq.org/advocacy/topics/housing-land-and-natural-resources/695-water-for-one-people-only-discriminatory-access-and-water-apartheid-in-the-occupied-palestinian-territory