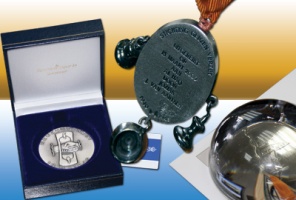 Al-Haq is proud to announce that it will be co-awarded the Dutch prize for Human Rights Defenders, the Geuzenpenning! The Geuzenpenning, is a Dutch award given to persons or organisations who have fought for democracy and against dictatorship, racism and discrimination. It has been awarded annually since 1987 in the city of Vlaardingen.

The Geuzenpenning is an initiative of the Geuzen Resistance (1940-1945) Foundation. The organisation takes its name from the resistance group called ‘De Guezen‘ which was active during World War II around Vlaardingen, Maassluis and Rotterdam. The resistance group, in turn, took its name from the Geuzen, a collection of armed groups that fought the Spanish occupation of the Low Countries in the 16th century, during the Dutch Revolt. Fifteen of the WWII Geuzen were executed by German forces at the Waaldorp plain on 13 March, 1941. After the war, surviving members of the group started the foundation to honor the memory of their fallen comrades and the Geuzen ideals, to promote and maintain democracy in the Netherlands and to heighten global awareness of all forms of dictatorship, discrimination and racism.

Al-Haq will be accepting this award on 13 March 2009, along with the co-laureate, B’Tselem, in the Netherlands.  The General Director of Al-Haq, Shawan Jabarin, hopes to be able to accept this award on behalf of Al-Haq in person.  Unfortunately, Israeli occupation authorities have not allowed Mr. Jabarin to leave the Occupied Palestinian Territory since 2006.

Mr. Jabarin, a longstanding human rights defender, traveled freely to and from the occupied West Bank, going abroad on eight separate occasions between 1999 and February 2006. Mr. Jabarin was then promoted by Al-Haq to the position of General Director. Since October 2006, the Israeli military authorities have repeatedly denied him permission to leave the West Bank to attend human rights conferences in various countries, thereby hindering his professional duties. The ban has effectively been absolute in scope, yet no formal order has been issued, nor have the Israeli authorities explained why the restrictions have been imposed.  Violating Mr. Jabarin’s right to a fair trial, the Israeli High Court of Justice rejected a petition to overturn the travel ban on the basis of “secret evidence” that was not disclosed to Mr. Jabarin or his legal counsel.

Al-Haq hopes that intervention by Dutch diplomatic authorities and the human rights community will be able to overcome this arbitrary ban on Mr. Jabarin and allow him to accept this great honor on behalf of Al-Haq.