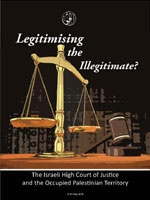 Al-Haq is pleased to announce the publication of its new study, “Legitimising the Illegitimate? The Israeli High Court of Justice and the Occupied Palestinian Territory”, on selected jurisprudence of the Israeli High Court of Justice (HCJ). The research highlights the procedural and structural deficiencies of this judicial body and its often perverse application of international legal standards, which provide moral weight and legal justification to the illegal Israeli policies implemented in the Occupied Palestinian Territory (OPT).

Since the beginning of the occupation in 1967, the HCJ has been operating as the only local judicial forum for Palestinians whose human rights were violated by the Occupying Power, Israel, rendering its decisions under a veneer of judicial integrity and adherence to the rule of law. As the Israeli occupation continues well into his fifth decade, the proliferation of discourses on legality has become Israel‘s most acclaimed tool for preserving its legitimacy, both locally and internationally.

In an examination of the Court‘s work and role in perpetuating and legitimising Israel‘s unlawful practices and policies in the OPT, the study presents an analysis of a number of recent decisions relating to the Annexation Wall and the blockade of the Gaza Strip. It considers the problems and challenges embodied by the Court’s role as a rubber-stamping tool of Israel’s occupation as well as the place of the pyrrhic victories afforded from time to time to individual Palestinian petitioners.

For many years, human rights lawyers in the OPT and Israel have been asking themselves if continuing to petition the Court is a viable form of resistance against the occupation and an adequate way of ensuring the protection of the rights of the occupied population. Given the lack of any meaningful amelioration of the human rights situation in the OPT, this question has taken on a new urgency. The study concludes that after four decades of the HCJ’s complicity with the oppression of the Palestinian people, the human rights community has to adopt a broader perspective and to engage with a new legal and tactical realism when litigating cases before this Court.