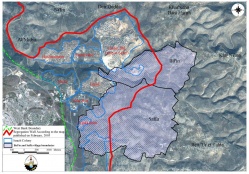 before the Superior Court of Quebec, Canada

On 9 July 2008, in continuation of their struggle for justice in the face of unlawful appropriation of their land, the people of Bil’in village commenced legal proceedings before the Superior Court of Quebec in Canada, against Green Park International Inc. and Green Mount International Inc. The defendants are Canadian corporations registered in the Province of Quebec who have been involved in the construction, marketing and selling of residential units in the illegal Jewish-Israeli settlement of Modi’in Illit on the land of the village of Bil’in, in the occupied West Bank. The claim, as amended on 23 January 2009, filed by Bil’in Village Council’s lawyer in Canada, Mark Arnold, demonstrates that in so doing, the defendants are aiding, abetting, assisting and conspiring with Israel, the Occupying Power in the West Bank, in carrying out an illegal act.

Located close to the Green Line that separates the occupied West Bank from Israel, the Palestinian village of Bil’in covers 4,085 dunums, almost all of which has traditionally served as agricult ural land. Over the past four years, Bil’in has attained international prominence through its weekly non-violent demonstrations against Israel’s Annexation Wall, which cuts through the area, appropriating roughly half of the village’s land in the process. 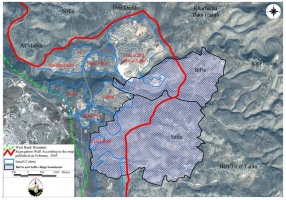 Al-Haq’s case study on Bil’in includes further background information on the appropriation of Bil’in’s land and the involvement of the Canadian corporations in illegal settlement construction on that land:

Under Article 49(6) of the Fourth Geneva Convention, an Occupying Power is prohibited from transferring part of its own civilian population into the territory it occupies. The transfer of Israeli settlers into the Occupied Palestinian Territory is a war crime under the Rome Statute of the International Criminal Court, as well as under Canada's Crimes Against Humanity and War Crimes Act. The petition thus argues that through their actions, the defendant companies have wilfully or negligently participated in the violation of both international and domestic Canadian law. As such, Bil’in Village Council is entitled to obtain the cessation of the illegal activities of the defendants, and to reparation for injury caused, under both the Quebec Charter of Human Rights and Freedoms and the Civil Code of Quebec.

The Green Park defendants have filed multiple dismissal motions with the Court, alleging that the claims of Bil’in should be dismissed summarily on four grounds; justiciability, forum non conveniens, res judicata and standing. The defendants have submitted that the Israeli courts, and not the Canadian courts, are the proper forum for this case to be heard, despite the fact that the Israeli courts has refused to rule on the illegality of Jewish-Israeli settlements in the OPT in light of international humanitarian law, instead holding the legality of the settlements to be non-justiciable (see, for example, Bargil v. Government of Israel, HCJ 4481/91). The defendants have submitted that the Quebec Court should decline jurisdiction to hear the case and that it should be dismissed.

In response, Bil’in Village Council has submitted an expert opinion from an eminent Israeli law professor to the Quebec Court which confirms that the case would not be heard by the Israeli courts. Green Park has submitted a contrary opinion in the form of an affidavit from its Israeli lawyer. The motions, upon which the Superior Court of Quebec will determine whether it will proceed to rule on the merits of the case, are scheduled to be heard in Montreal, Quebec on 22, 23 and 25 June 2009. Al-Haq will continue to keep you informed of any further developments in the case. Please do not hesitate to contact haq @ alhaq.org should you have any questions, comments or require any further information pertaining to the case.

Litigation of this kind is extremely costly for Bil’in village and Al-Haq. Donations, however small, are therefore greatly appreciated by the village and are an important contribution to the pursuit of justice for Palestinians:

Click here to learn how you can help support Bil’in village in their historic case.