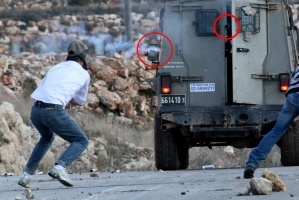 Protester dies after being struck in the head by tear gas canister.

Today’s reports confirm the tragic death of Mustafa Tamimi, 28 years old – who was struck in the head by a tear gas canister fired by an Israeli soldier at point blank range during the weekly protest in al-Nabi Saleh yesterday. Tamimi’s injury occurred during the time that the UN Special Rapporteur on the promotion and protection of the right to freedom of opinion and expression, Frank La Rue, was in the village as part of his first mission in the region. During the same protest, a 14-year-old boy suffered a broken ankle and a 17-year-old girl was left with a broken arm after being hit by rubber-coated metal bullets.

Tamimi’s mournful death coincides with the United Nations Human Rights Day 2011, on occasion of which Al-Haq is releasing a new report, “Repression of non-violent protest in the Occupied Palestinian Territory.” The report examines the excessive use of force used by Israel in the illegal suppression of peaceful protests in the West Bank village of al-Nabi Saleh, which amount to violations of Israel’s international law obligations to respect and protect the right to life and to the freedom of expression of the occupied population.

According to Al-Haq’s documentation, since 2004, at least 13 protesters have been killed at demonstrations across the West Bank, including East Jerusalem. The Israeli military regularly targets protesters as well as bystanders, homes and property with rubber-coated metal bullets, tear-gas canisters, sound grenades and ‘skunk,’ a foul smelling chemical substance. Al-Haq’s report demonstrates that the use of force targets protesters and is disproportionate in nature.

Commenting on the incident, Al-Haq’s General Director, Shawan Jabarin, stated, “this tragic death resulted from Israel’s practices that violently deny the freedom of expression and assembly by any means necessary. Disproportionate force is regularly used against the weekly protests held throughout the Occupied Palestinian Territory, and the death of Mustafa Tamimi could have occurred at any protest over the past year. It is another example of Israel’s policy to silence dissent and criticism of the Occupying Power in the OPT. Israel must immediately investigate this incident, and other such violations, and put an end to the policy that allows for the disproportionate use of force against protesters. The international community must ensure that this takes place without delay.”

Israel justifies its use of disproportionate force against protesters by claiming that it is enforcing military legislation – including Military Order No 101 concerning the Prohibition of Incitement, promulgated by the Israeli Military Commander in the West Bank in 1967 – that restricts gatherings of more than ten persons having, broadly defined, a political character. Such military legislation, along with other regulations and permissive rules of engagement issued to soldiers, affords the Israeli army far-reaching powers in enforcing a prohibition against peaceful protests and any other activity against Israel’s illegal policies in the OPT.

Al-Haq has recently launched an interactive map that charts peaceful protests and the force used by the Israeli army to suppress them.