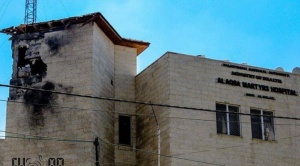 Since the beginning of “Operation Protective Edge”, Israel has damaged at least 18 health facilities in the Gaza Strip. On 12 July, Al-Rahma Association for the Disabled in the district of North Gaza was struck by a missile, killing Suha Abu Sa’da, 39, and ‘Ola Wishahi, 31, both of whom were physically disabled, and injuring many others. On 16 July, Al-Shifa Hospital in Rafah was also hit in an aerial attack. Furthermore, on 19 July, the paediatrics unit of the Beit Hanoun Governmental Hospital, located on the second floor, was struck with a missile, causing damage to the building but no reported injuries.

On Monday 21 July 2014 at approximately 2:40 P.M., Israeli tanks situated in the eastern buffer zone, which runs along the border of the Gaza Strip, fired at least four artillery shells at Shuhada’ Al-Aqsa Hospital in Deir al-Balah. The hospital is located approximately five kilometres away from the buffer zone and in an area that has been subject to Israeli ground invasions. As a result of the shelling, three civilians were killed, including one child, all of whom were inside the hospital. Khaled Bayoumi, 33, was receiving medical treatment in the surgical unit at the hospital, while ‘Alaa’ Abu Dahrouj, 16, and Zakariyya Shakshak, 29, were both visiting patients. Approximately 40 people, most of whom were patients, were injured, in addition to paramedics, medical staff and visitors.

Al-Haq’s field researcher arrived at the scene of the incident less than thirty minutes after the shelling took place and began preliminary documentation. The following information was retrieved:

Further hospitals and medical outlets have been targeted over the past two weeks in the Gaza Strip. Hospitals and health facilities are granted protected status under international humanitarian law (IHL). As such, the use of any health facility for military operations is unlawful. However, the principle of distinction under IHL holds that civilians and civilian objects, including hospitals and humanitarian facilities, cannot be subject to attacks, unless compelling evidence suggests that they are being used for other activities “harmful to the enemy”, and then the targeting of such objects is permitted, subject to strict limitations. The principle of proportionality prohibits any “attack which may be expected to cause incidental loss of civilian life, injury to civilians, damage to civilian objects, or a combination thereof, which would be excessive in relation to the concrete and direct military advantage anticipated”. In addition, prior to an attack on a hospital, IHL requires that a warning be issued and the attack be carried out only after the warning has remained unheeded. In the case that these procedures are not fulfilled, such attacks are in violation of IHL. Additionally, the intentional targeting of civilians and civilian objects constitutes a war crime under the Rome Statute of the International Criminal Court.

Under Article 18 of the Fourth Geneva Convention, it is explicitly prohibited to attack, fire upon, or in any way to prevent hospitals or medical units from performing their medical and humanitarian duties. However, according to UN OCHA Gaza Emergency Situation Report, since the beginning of the offensive on the Gaza Strip, 26 Palestinian Red Crescent health workers have been injured and several ambulances have been damaged.

As an Occupying Power, Israel must fulfil its obligations to protect the occupied population in the Gaza Strip. Al-Haq is gravely alarmed by the rapidly increasing number of civilian and child casualties in the Gaza Strip and condemns the lack of protection afforded to the residents, which has led to the increasing vulnerability of the civilian population.