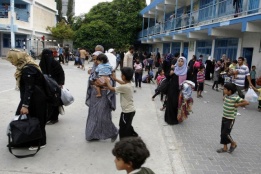 On 24 July 2014, a shelter run by the United Nations Palestinian Refugees Agency (UNRWA) for Palestinian civilians displaced from their homes by continuous and escalating hostilities in the Gaza Strip was reportedly shelled. UNRWA had designated the school in Beit Hanoun, in the northern Gaza Strip, as an emergency shelter. The school is one of 68 schools designated by UNRWA as ‘emergency shelters or temporary safe spaces’, the precise GPS coordinates of which have been supplied to the Israeli occupying forces. During the day, UNRWA was liaising with the Israeli army to coordinate a humanitarian evacuation of the premises, which “was never granted,” according to UNRWA spokesperson Chris Gunness. Civilians were gathered in the courtyard of the school waiting for the expected evacuation to take place when the school was shelled without warning. At least five shells hit the school, leaving an impact crater in the school’s courtyard. According to the Gaza Health Ministry, at least 13 civilians have been killed and approximately 200 injured in the attack on the UNRWA emergency shelter. At the time of the shelling, Israeli occupying forces were reportedly engaged in combat in the area. Al-Haq’s documentation team continues to investigate the incident to clarify the circumstances of the attack, despite the difficult environment posed by the continued offensive.

In response to the shelling of the UNRWA shelter, the Secretary General called on Israel “to exercise particular care to avoid any attack on United Nations premises where civilians have taken refuge”. The event comes at a time when the wide scale offensive has claimed the lives of over 760 Palestinians, including 599 civilians, of which 179 are children and 89 women, according to Al-Haq’s preliminary documentation. The high percentage of civilian deaths and property destruction resulting from Israeli military attacks indicates a blatant disregard for the principles of distinction and proportionality.

The Issuing of Warnings to Civilians

The attacks within the recent offensive, which have indiscriminately targeted the civilian population, must be viewed in the context of the unrelenting and devastating eight-year Israeli imposed closure of the Gaza Strip, which amounts to collective punishment of the civilian population. Critically, facing a two week bombing campaign and heavy shelling, civilians displaced in the current hostilities have nowhere to escape. The Gaza Strip is surrounded in its entirety, by a concrete wall and double wire fence on land, replete with watch towers and a naval closure at sea. Israel exercises full control over the access of people and goods to and from the Gaza Strip and the only departure point, the Rafah crossing with Egypt, is frequently closed. This means that the humanitarian shelters provided by UNRWA to shelter displaced civilians, including the elderly, women and children seeking refuge from the deluge of bombing and shelling, are the only safe zones in the Gaza Strip. As they provide the sole available refuge for civilians escaping hostilities, they must be unequivocally respected by Israel. If corroborated by Al-Haq’s field researchers, Israeli responsibility for the July 24 shelling would have far reaching implications.

Under customary international law, the principle of distinction provides that civilians and civilian objects cannot be subject to attack. Furthermore, the Fourth Geneva Convention and customary international law, obligates Israel to take all feasible precautions to ensure that civilians and civilian objects are not subject to attack. This entails a responsibility to ensure that the loss of civilian life and civilian objects during hostilities is proportionate, and not excessive, in relation to the military advantage sought. Al-Haq reminds Israel that it is required to respect and ensure the protection of civilians, located in agreed safety zones and neutralised areas, whose coordinates have been supplied. In this manner, Al Haq reminds Israel of its procedural duty to provide a warning where a military determination has been made to attack a military target which may cause incidental losses to civilians and civilian property. As the Occupying Power, Israel is required to ensure the welfare of the occupied population by providing proper accommodation for protected persons who have been evacuated and displaced as a result of the hostilities.

Under the Convention on the Privileges and Immunities of the United Nations, the premises of the United Nations, including UNRWA, are inviolable and Israel is required to respect the immunity of UNRWA buildings from interference. The inviolability of UNRWA installations cannot be overridden by the demands of military expediency. If evidence demonstrates Israel has violated this inviolability during the recent offensive, it must be held responsible for deaths, injuries and losses suffered in the attack.

Al Haq is concerned by the escalation of hostilities and the disproportionate number of civilian deaths and casualties. It considers Israel’s continued disregard for civilian life to be in violation of international humanitarian law and customary international law. Furthermore, Al-Haq reminds Israel that the extensive destruction of property, not justified by military necessity, including the targeting of mosques, cemeteries, industrial facilities, offices of welfare organisations, hospitals, schools and banks, constitutes a grave breach of the Fourth Geneva Convention and reminds the High Contracting Parties to the Fourth Geneva Convention of their obligations “to take all measures necessary for the suppression of all acts contrary to the provisions”.

The continued killing and destruction that is taking place amidst international silence allows for the perpetuation of Israeli military strategies that directly contradict international law. It is imperative that the international community intervene and pressure Israel to halt its military offensive. As the Secretary General has strongly condemned the attack, the international community must actively seek an end to the hostilities. The United Nations must take concrete steps to ensure that Israel ends its offensive on the Gaza Strip immediately, including through the imposition of sanctions where necessary. Al-Haq reiterates its condemnation of the widespread and systematic crimes committed in the Gaza Strip against the civilian population.