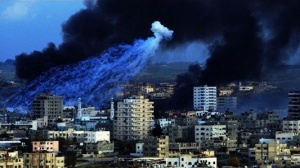 Briefing Note II: The Illegality of Israel’s use of DIME weapons

Over the past two weeks Israel has been engaging in hostilities in the occupied Gaza Strip. ‘Operation Protective Edge’ has been  characterized by Israel’s indiscriminate and disproportionate attacks against Palestinian civilians and civilian objects, resulting in a mounting death toll of 924 Palestinians and over 200,000 displaced Palestinians as of 26 July 2014.[1]

The Al-Haq Briefing Note Special Series related to the occupied Gaza Strip will address select aspects of Israel’s conduct of ongoing hostilities in the Gaza Strip. In particular, this Special Series will apply the framework of international humanitarian law to Israeli acts or omissions. As an Occupying Power engaged in hostilities, Israel must abide by its obligations under international humanitarian law (IHL), which are set out primarily in the Regulations Annexed to the 1907 Hague Convention respecting the Laws and Customs of War on Land (Hague Regulations) and the Fourth Geneva Convention of 1949; both are largely reflective of customary international law.[2]

ISRAEL’S USE OF DIME WEAPONS

While treating victims of “Operation Protective Edge”, medical service personnel in the Gaza Strip have reported an increasing number of unusual injuries which they believe to be the result of Israel’s experimental use of Dense Inert Metal Explosives (DIME). These nonconventional and experimental weapons usually contain a mixture of explosive material, cobalt, nickel, iron and tungsten alloy which work together to create a very dense micro-shrapnel. DIME weapons, also known as DIME bombs, are carried by Hellfire rockets connected to Israeli drones and dropped into densely populated civilian areas.[3] Arguably, DIME bombs are designed to reduce collateral damage by increasing the blast effect over a small area, rather than having a weak blast effect over a larger area. The enormous energy and the micro-shrapnel effects of DIME weapons, however, are highly lethal and result in severe physical injury and unnecessary suffering.[4]

The injuries of victims who have been in contact with experimental DIME weapons are distinguishable from injuries sustained by non-experimental weapons. While signs of solid shrapnel or metal fragments are typical of amputations sustained from traditional explosives, physicians in the Gaza Strip are witnessing gruesome amputations caused by a metal vapor or residue which indicate the detonation of an extreme force in a small radius.[5] In fact, as a result of these weapons, reported cases in the Gaza Strip include entire bodies cut in half, shattered bones, and skin, muscle and bones turned into charcoal due to the destructive burns associated with the weaponry’s extreme force and high temperature.[6] According to Dr. Erik Fosse, DIME weapons have dangerous biological effects on the victims and cause the tissue to be torn from the flesh. [7]

DIME weapons are a mixture of ingredients in a composite cast, rather than a metal cast, which explains why there are no metal fragments or shrapnel seen with these amputations. Indeed, Gaza’s Undersecretary of Health, Youssef Abu al-Resh, has verified that the evidence of these unique medical symptoms, coupled with the mechanical effects of DIME bombs, suggests that Israeli forces have been using experimental DIME weapons against Palestinian civilians. [8]

Amputations caused by DIME weapons are extremely difficult to treat and usually result in death.[9] In particular, successful treatment of such injuries is near impossible in the Gaza Strip. During the ongoing hostilities, Israel’s has damaged at least 18 health facilities, the targeting of which is a war crime.[10] The health facilities which remain functioning are suffering severe shortages in water, electricity and medical supplies as casualties continue to rise.[11] Providing treatment for the over 4,500 wounded Palestinians[12] is difficult enough, let alone providing time-consuming treatment to those who suffer from complex injuries resultant from DIME bombs.

Palestinians who nonetheless survive these injuries are at risk of enduring long-term cancerous effects. According to the United States Center for Disease Control and Prevention, exposure to a mixture of tungsten and cobalt, ingredients used in DIME weapons, are linked to early signs of lung cancer.[13] Additionally, Norwegian Dr. Mads Gilbert believes that DIME weapons may cause a severe form of muscle cancer called Rhabdomyosarcoma which easily spreads to the lungs.[14]

Israel’s use of DIME bombs against Palestinian civilian populations violates international humanitarian law (IHL). The customary IHL principle of proportionality prohibits incidental loss of life, injury to civilians, damage to civilian objects, or a combination thereof which would be excessive in relation to the military advantage.[15] This principle of proportionality is further codified in the 1980 Convention on Certain Conventional Weapons (CCW) which prohibits High Contracting Parties such as Israel, as a signatory to the convention, from using weapons that cause superfluous injury or excessive suffering.[16] Palestinian civilians who encounter DIME bombs are undoubtedly subjected to such excessive suffering as evidenced by the devastating and tortuous injuries they must endure. Furthermore, these injuries result from the DIME bombs’ micro-shrapnel which are non-detectable fragments in the human body.[17] Protocol I to the CCW strictly prohibits the use of any weapon, the primary effect of which is to injure by fragments in the human body that escape detection.[18] As such, Israel’s use of DIME bombs is illegal due to both the mechanics of micro-shrapnel and the excessive suffering such weapons inflict upon Palestinian civilians.

Furthermore, the customary IHL principle of distinction dictates that parties to a conflict must at all times distinguish between civilians and combatants and that attacks may not be directed against towards civilians.[19] This duty to distinguish is reiterated in Article 3(3) of Protocol II to the CCW, CCW which prohibits the use of weapons that is expected to cause incidental loss of civilian life, excessive to military advantage.[20] Israel’s aerial delivery of DIME bombs has resulted in such imprecise warfare and, as cited above, the disproportionate deaths of Palestinian civilians.  Furthermore, Article 3(4), obligates Israel to take all feasible measures to protect civilians from the effects of weapons such as DIME. [21] When Israel drops DIME bombs via air-delivery in densely populated areas, it is exposing, rather than protecting, civilians from the effects of such weapons. Furthermore, Article 25 of the Hague Regulations prohibits the bombardment of towns, villages, dwellings and buildings which are undefended.[22] As such, by releasing DIME bombs into undefended, densely populated civilian neighborhoods, buildings, and homes, Israel is breaching its obligation as an Occupying Power to protect civilians under IHL.

Lastly, the customary IHL principle of humanity requires that all persons be treated humanely in all circumstances. Involuntary biological, medical or scientific experiments are grave breaches of IHL and classified as war crimes under the Rome Statute of the International Criminal Court.[23] Arguably, Israel is using Palestinian civilians in Gaza to test the development of experimental DIME bombs.[24] The international community must conduct further investigation into these potential war crimes.

[2] While Israel has accepted the applicability of the Hague Regulations on the basis of their customary nature, it has declared that it will only abide by the ‘humanitarian provisions’ of the Fourth Geneva Convention, although it has refused to specify which provisions it regards as humanitarian. For a recent judgment see HCJ 2690/09, Yesh Din et al. v Commander of the IDF Forces in the West Bank et al., (Judgment, 23 March 2010), paragraph 6.