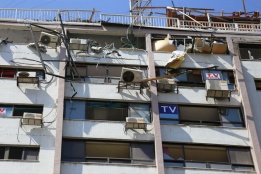 For nearly a month, Israel has been engaging in hostilities in the occupied Gaza Strip. ‘Operation Protective Edge’ has been characterized by Israel’s indiscriminate and disproportionate attacks against Palestinian civilians and civilian objects, with at least 1,884 Palestinians killed, including 430 children, and 7,376 Palestinians injured as of 5 August 2014.[1]

ATTACKS AGAINST JOURNALISTS AND THE DESTRUCTION OF MEDIA PROPERTY

Numerous local and foreign journalists have been injured while reporting during the conflict, and to date eight journalists have been killed.[2] On 20 July 2014, Al-Haq documented an Israeli airstrike hit a press car, killing 25-year old Khaled Hamad. Khaled, a photographer with the Continue Agency, was on his way into al-Shuja’iyya neighbourhood for work.[3] Meanwhile, on Wednesday 30 July, Al Haq documented the deaths of three journalists killed during the time of the four-hour ceasefire announced by Israel between 3:00 p.m. and 7:00 p.m. At approximately 4:30 p.m. Israeli tanks situated at the eastern buffer zone fired artillery shells at the al Bastat market in Shuja’iyya and killing thirty civilians including the three journalists.[4] Notably, Khalad Hamad was reportedly travelling in a press-marked car whilst the three journalists reportedly wore identifying press insignia on their clothes. The identifying press insignia was evident from a video recording of one of the deaths.[5]

Indiscriminate attacks on media buildings have been a significant feature of ‘Operation Protective Edge’. On Friday 18 July, Al-Haq documented an attack where an airstrike hit an office in the al-Jawhara building, in which several media and press offices were located, injuring one journalist.[6] On July 22, Al Jazeera staff members were forced to evacuate their premises after two shells were fired into their offices on the 11th floor of a commercial center.[7] Israel has further bombed the al-Wattan Voice TV headquarters in Gaza on four separate occasions.[8] On 27 July, the offices of Hamas’ al-Aqsa TV station in Burj Al-Shourouq were hit by Israeli rocket fire. And two days later, the headquarters of Al-Aqsa TV in Nasser were bombed and partially destroyed.[9] According to Jim Boumelha, President of the International Federation of Journalists, the Israeli army had been made aware of the location of the media outlets and the coordinates of the media buildings identifying their location in the Gaza Strip.[10]

Attacks against journalists and media buildings have been accompanied by a wave of anti-press sentiment by Israeli politicians, who have publicly branded news agencies, which they consider to be anti-Israeli, as ‘enemy’ broadcasters.[11] The Israeli Minister for Communications has recommended to the Cable and Satellite Broadcasting Council that Al Jazeera broadcasts not be aired while ‘Operation Protective Edge’ was ongoing, arguing that the broadcasts were biased.[12] Similarly, the Israeli Minister for Foreign Affairs reportedly encouraged closing down Al Jazeera media in Israel, suggesting that the news organization broadcast was an “encouragement to terrorists”.[13] The Israeli army has reportedly justified the strikes against the Al-Aqsa television and radio stations on the basis that they had “propaganda dissemination capabilities” used to incite hatred against Israelis, and deliver messages to Hamas operatives.[14]

Under Article 79 of the First Additional Protocol and customary international law, journalists engaged in dangerous professional missions of armed conflict are considered civilians and must be protected as such, provided that they take no action adversely affecting their status. Moreover the ICRC Commentary to Rule 34 on Journalists, finds that in addition to the prohibition on attacks against journalists, there is practice “which indicates that journalists exercising their professional activities in relation to armed conflict must be protected”.[15] This places an onus on Israel to refrain from targeting civilian journalists, but also indicates, that there is an obligation to protect journalists while they are engaged in carrying out their professional activities. Israel’s deliberate targeting of reporters travelling in distinctive press marked cars and wearing press marked clothes highlights its failure to do either. A direct attack on civilian journalists may amount to a war crime under Article 8(2)(b)(i) of the Rome Statute of the International Criminal Court, and constitutes a grave breach of the Geneva Conventions and Additional Protocol 1.

Similarly, media property such as television and radio station buildings are protected as civilian objects, unless used for military purposes. Television and radio stations can only be the targets of attack if they are considered a military objective under Article 52(2) of Additional Protocol 1. A military objective is limited to objects, which by their nature, location, purpose or use, would make an effective contribution to military action.[16] As such, the targeting of such property is only permissible on the narrow grounds that the total or partial destruction of the property offers a definite military advantage as previously stated in Article 52(2) of Additional Protocol 1.[17] Furthermore attacks on legitimate military objectives will be limited by the principle of proportionality and the principle of precaution. The former prohibits the launching of an “attack which may be expected to cause incidental loss of civilian life, injury to civilians, damage to civilian objects, or a combination thereof, which would be excessive in relation to the concrete and direct military advantage anticipated”.[18] The latter obligates Israel to take all feasible precautions to protect civilians and civilian property against the effects of attacks.[19]

Given that the coordinates to media buildings were supplied to Israel in order to ensure their protection, any direct attack carried out against such buildings constitutes an unjustifiable breach of humanitarian law. In addition, the bombing and destruction of media property such as al-Jawhara building, the al-Wattan Voice TV headquarters, the al-Aqsa TV station in Burj Al-Shourouq and the Al-Aqsa TV station in Nasser, not rendered absolutely necessary by military operations may amount to a breach of Article 53 of the Fourth Geneva Convention, and Article 23(g) of the Hague Regulations and constitutes a grave breach of the Geneva Conventions.

The ‘propaganda argument’ leveled at Al Jazeera and Al-Aqsa TV and radio, is reminiscent of the type of arguments employed by NATO to justify the bombing of RTS (Serbian TV and radio station) in Serbia in 1999.[20] There is a distinct difference between television and radio stations being biased, or used as military communications networks.[21]  The former does not meet the criteria of "effective contribution to military action" and "definite military advantage" necessary to elevate the property to a military objective under Article 52(2) of Additional Protocol 1. Furthermore, according to the ICRC Commentary on Article 52(2), any military advantage must be ‘concrete and direct’. The use of media stations for propaganda purposes alone would not fulfill this requirement. Accordingly, the argument that the Al Aqsa television and radio broadcasters contained ‘propaganda dissemination capabilities’ does not justify the targeting of television and radio stations.[22]

The ability of journalists to continue reporting during armed conflict is a necessary component of the right of freedom of expression guaranteed by Article 19 of the International Covenant on Civil and Political Rights and Article 19 of the Universal Declaration of Human Rights. Moreover the protection of journalists during hostilities is particularly significant given that international tribunals may compel war correspondents to give evidence at international trials. [23]  Therefore, it is imperative that the High Contracting Parties to the Geneva Conventions search for those alleged to have committed grave breaches of the Geneva Conventions and bring such persons before their own courts in accordance with the principle of universal jurisdiction. Furthermore, the General Assembly Resolution on the Safety of Journalists and the Issue of Impunity, underscores the need for states to ensure accountability for crimes against journalists falling within their jurisdiction.[24]

[1] Al-Mezan, ‘Humanitarian Truce agreed and seems to be honoured,

[21] Final Report to the Prosecutor by the Committee Established to Review the NATO Bombing Campaign against the Federal Republic of Yugoslavia, paragraphs 75-76