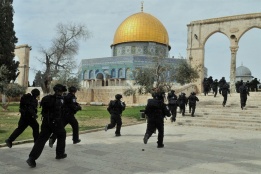 Occupied East Jerusalem continues to be a flashpoint for clashes between Israeli Occupying Forces and Palestinians. Tensions have been elevated since September, due to Israel's targeting of Al-Aqsa compound. Although Al-Aqsa remains under Jordanian guardianship since Israel's illegal annexation of East Jerusalem in 1967, Israel has effective control of the compound and just announced  that the compound is closed until further notice. The situation began to intensify on 24 September 2014,when  Israeli Occupying Forces prohibited Palestinian worshipers from entering the compound to allow for right-wing Israelis, including settlers, to tour the area and visit the holy site. Israeli police continued to protect settlers that forcefully entered the compound on several occasions throughout October.  Israel's tightened security has led to the arrest of numerous Palestinians and limited access by Palestinians to the holy site through the use of age restrictions. Israel has continued to use force in order to disperse Palestinian worshipers from the compound, including those conducting sit-ins. Draft legislation in the Israeli Knesset has also been introduced on partitioning Al-Aqsa.

Al-Haq is gravely concerned that Israel's provocative actions will lead to a further escalation in violence in the Occupied Palestinian Territory and possibly neighboring countries, and urges the international community to view the recent events in a broader domestic and regional context. Al-Haq further calls for immediate, concrete action to be taken, including review of Israel's actions as an Occupying Power under the Fourth Geneva Convention, in order to hold Israel accountable for its breaches of international human rights and humanitarian law.

The targeting of Al-Aqsa by Israel and Israeli extremists since 1967 is a regular occurrence. Incidents include:

Recent statements made by Israeli Prime Minister Benjamin Netanyahu regarding maintaining the status quo and Israel's respect for freedom of worship are not only disingenuous given the aforementioned events, but also fail to acknowledge Israel's more routine breaches of Palestinians' right to freedom of religion, including access to holy sites. Both Palestinian Muslims and Christians are routinely denied their rights to freely worship in Jerusalem. Infringement of these rights becomes even more severe during times of Jewish holidays. More specifically, Palestinian access to Al-Aqsa is regularly hindered by Israel via arbitrary prohibitions based on age and gender.

Israel also often includes the prohibition of access to Al-Aqsa as a condition for release of individuals, many of whom are arbitrarily arrested and detained. For example,on 18 April 2014, Malek Bassem 'Esseile, 13, was detained for allegedly throwing stones, a claim which he denies. After being held for nearly 6 hours, Malek was released on condition that he would not enter Al-Aqsa compound for three weeks.

The attacks on Al-Aqsa, including the draft Knesset bill, do not stem from a few Israeli extremists that view their access as a religious right. Rather, the actions are part of Israel's wider plan to seize control of Jerusalem in its entirety, and are supported by the Ministry of Defense, police, and other authorities.

The international community must view Israel's provocations in light of its illegal annexation of East Jerusalem in 1967, and Israel's broader strategy that supports and entrenches the occupation. Since 1967, Israel has implemented a variety of policies that have served to isolate East Jerusalem from the rest of the West Bank, placing restrictions on the rights of Palestinian Jerusalemites while judaizing the city. This is also reflective of the West Bank, where Israeli settlements are changing the demography and landscape of the area.

In viewing Israel's history, including its partition of the Ibrahimi mosque in Hebron in 1994, and lack of accountability for any of its actions, the draft law before Knesset is predictable. However, what will not be predictable is the effect of Israel's continued assault on Al-Aqsa, including its recent closing and a possible partition.   Al-Haq is also gravely concerned that Israel's actions will have broader regional implications, as Al-Aqsa is considered the third holiest site in Islam. The Middle East is already enflamed with sectarian tensions, continued provocations by Israel over Al-Aqsa threaten to turn a political conflict into one that is centered on religion.

As noted in the International Law Commission's Draft Articles on the Responsibility of States for Internationally Wrongful Acts, third states must uphold their responsibility to "bring to an end through lawful means any serious breach" under international law. In its Advisory Opinion on the Wall, the International Court of Justice further noted that State Parties to the Fourth Geneva Convention are obliged to "ensure compliance by Israel with international humanitarian law as embodied in that Convention." As such, Al Haq urges the High Contracting Parties of the Fourth Geneva Convention to convene a new conference to review Israel's actions as an Occupying Power, and take tangible measures based on the review. Al-Haq further urges the international community to implement measures, including sanctions such as travel bans against Israeli settlers involved in violent attacks against Palestinians, in order to end Israel's impunity and halt any action to split Al-Aqsa or change its character in any way.

The situation is past one where condemnation without action will alter Israeli policy.