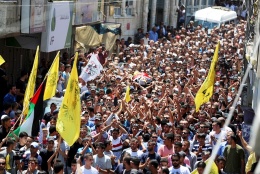 On Friday 3 July 2015 at approximately 6:30 am, 17-year-old Muhammad Al-Kassba, a resident of Qalandiya refugee camp, north of Jerusalem, was standing near the Abu Al-Shaheed gas station (also known as Al-Latroun gas station) when an Israeli military vehicle approached the station. As the vehicle passed the station, Muhammad threw a stone at the vehicle and ran away. Two Israeli soldiers stepped out of the military vehicle, one opening fire on Muhammad with live ammunition. Muhammad was hit and wounded by several bullets, including a shot to the head (an indication of a wilful killing). He died immediately as a result. There were no confrontations or demonstrations taking place in the vicinity at the time, as confirmed by eye witness reports.

According to information and evidence collected by Al-Haq from the field, the Israeli Occupying Forces (IOF) arbitrarily shot and killed Muhammad, who posed no threat to the Israeli soldiers' lives at the time of the shooting. Israeli reports claim that the Israeli soldiers stepped out of their military car, issued a verbal warning, shot live ammunition in the air to warn Muhammad, and then shot directly at him with live ammunition, claiming that their lives were in danger at the time as a result of the stone-throwing. One eye witness stated that a single bullet was fired in the air however, no other witnesses corroborated the Israeli claim that a verbal warning was issued. Additionally and most importantly, evidence collected by Al-Haq indicates that the entire incident did not exceed 30 seconds, contravening the Israeli timeline of events. It is impossible that the child could have been genuinely warned twice and then shot at directly and hit multiple times within the documented timeframe of a mere 30 seconds or less.

Furthermore, Muhammad was shot in the upper part of his body from approximately a 20-metre distance. This demonstrates an intent to kill. The officer or solider who fired the shot approached Muhammad's body after he had fallen on the ground, looked at it, and then returned to the military vehicle without providing any assistance.

It is worth noting, that both of Muhammad's brothers, Yasser and Samer, were also killed as children by the IOF in 2001 and 2002 respectively.

Al-Haq condemns the excessive and disproportionate use of force which led to the wilful killing of Muhammad Al-Kassba. The IOF soldiers could have avoided the use of firearms in this situation and resorted to non-lethal methods. Al-Haq calls on the Israeli occupying authorities to ensure a prompt, impartial and effective investigation into the death of Muhammad and requests that all perpetrators be held accountable.